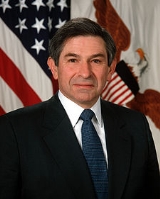 Overview
Paul Dundes Wolfowitz is a former United States Ambassador to Indonesia
United States Ambassador to Indonesia
This is a list of Ambassadors of the United States to Indonesia.Indonesia had been a Dutch colony since 1800 as a part of the Dutch East Indies. The Dutch were expelled in March 1942 by the Japanese occupation of Indonesia. After the surrender of Japan in 1945, Sukarno declared independence on...
, U.S. Deputy Secretary of Defense
United States Deputy Secretary of Defense
The Deputy Secretary of Defense is the second-highest ranking official in the Department of Defense of the United States of America. The Deputy Secretary of Defense is appointed by the President, with the advice and consent of the Senate...
, President of the World Bank
World Bank
The World Bank is an international financial institution that provides loans to developing countries for capital programmes.The World Bank's official goal is the reduction of poverty...
, and former dean
Dean (education)
In academic administration, a dean is a person with significant authority over a specific academic unit, or over a specific area of concern, or both...
of the Paul H. Nitze School of Advanced International Studies
Paul H. Nitze School of Advanced International Studies
The Paul H. Nitze School of Advanced International Studies , a division of Johns Hopkins University based in Washington, D.C., is one of the world's leading and most prestigious graduate schools devoted to the study of international affairs, economics, diplomacy, and policy research and...
at Johns Hopkins University
Johns Hopkins University
The Johns Hopkins University, commonly referred to as Johns Hopkins, JHU, or simply Hopkins, is a private research university based in Baltimore, Maryland, United States...
. He is currently a visiting scholar at the American Enterprise Institute
American Enterprise Institute
The American Enterprise Institute for Public Policy Research is a conservative think tank founded in 1943. Its stated mission is "to defend the principles and improve the institutions of American freedom and democratic capitalism—limited government, private enterprise, individual liberty and...
, working on issues of international economic development
Economic development
Economic development generally refers to the sustained, concerted actions of policymakers and communities that promote the standard of living and economic health of a specific area...
, Africa
Africa
Africa is the world's second largest and second most populous continent, after Asia. At about 30.2 million km² including adjacent islands, it covers 6% of the Earth's total surface area and 20.4% of the total land area...
and public-private partnerships, and chairman of the US-Taiwan Business Council
US-Taiwan Business Council
The US-Taiwan Business Council is a membership-based, non-profit organization founded in 1976 to foster trade and business relations between the United States and Taiwan....
.

He is a leading neoconservative. As Deputy Secretary of Defense, he was "a major architect of President Bush's Iraq policy and ...

"I think one has to say it's not just simply a matter of capturing people and holding them accountable, but removing the sanctuaries, removing the support systems, ending states who sponsor terrorism. And that's why it has to be a broad and sustained campaign. It's not going to stop if a few criminals are taken care of."

"I can't imagine anyone here wanting to spend another $30 billion to be there for another 12 years."

"There's a lot of money to pay for this. It doesn't have to be U.S. taxpayer money. We are dealing with a country that can really finance its own reconstruction, and relatively soon."

"There's definitely a rule in the Convention against humiliating prisoners and I'd have to see exactly the interview to see whether that in itself violated the Convention, but the Convention is very clear that prisoners have got to be treated properly. We are treating the Iraqi prisoners extremely well. In fact I think they get good food and shelter and they're free from the horrible commanders they used to work for. I think most of them are much happier, frankly."