Hendren joined the Lord's groundstaff at the age of 16, and made his first-class debut for Middlesex County Cricket Club
Middlesex County Cricket Club
Middlesex County Cricket Club is one of the 18 major county clubs which make up the English and Welsh domestic cricket structure, representing the historic county of Middlesex. It was announced in February 2009 that Middlesex changed their limited overs name from the Middlesex Crusaders, to the...
in 1907, though the game was abandoned after the first day when spectators caused damage to the pitch and he did not get to bat. He played nine games the following year and gradually established himself in the team, but it was 1911 before he made his first hundred, and until World War I
World War I
World War I , which was predominantly called the World War or the Great War from its occurrence until 1939, and the First World War or World War I thereafter, was a major war centred in Europe that began on 28 July 1914 and lasted until 11 November 1918...
forced the suspension of the County Championship
County Championship
The County Championship is the domestic first-class cricket competition in England and Wales...
he never managed to average 40 in a season.

Returning to cricket in 1919 Hendren scored 1,655 runs and averaged over 60, as he was to do the following year as well. He was a strong player of fast bowling. He was made a Wisden Cricketer of the Year in 1920 and was picked for the 1920/21 Ashes
The Ashes
The Ashes is a Test cricket series played between England and Australia. It is one of the most celebrated rivalries in international cricket and dates back to 1882. It is currently played biennially, alternately in the United Kingdom and Australia. Cricket being a summer sport, and the venues...
tour, making his Test debut at Sydney
Sydney Cricket Ground
The Sydney Cricket Ground is a sports stadium in Sydney in Australia. It is used for Australian football, Test cricket, One Day International cricket, some rugby league and rugby union matches and is the home ground for the New South Wales Blues cricket team and the Sydney Swans of the Australian...
and making 58 in the second innings despite Australia
Australian cricket team
The Australian cricket team is the national cricket team of Australia. It is the joint oldest team in Test cricket, having played in the first Test match in 1877...
's huge 377-run victory. He scored two further Test fifties in the series and retained his place for the 1921 series against the same opponents, but failed completely in his four innings, totalling only 17 runs.

1923 was a productive year for Hendren, as he scored 3,010 runs in the season including 13 centuries; he was recalled to the England side the following year and averaged 132.66 against South Africa
South African cricket team
The South African national cricket team represent South Africa in international cricket. They are administrated by Cricket South Africa.South Africa is a full member of the International Cricket Council, also known as ICC, with Test and One Day International, or ODI, status...
. Further success was to follow as he averaged over 56 in every year from 1922 to 1928. In both 1927 and 1928 he again made 13 hundreds, in the latter year recording his highest season's aggregate of 3,311 runs. 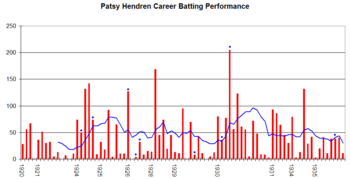 In 1929/30, Hendren went on tour with England to the West Indies: his 693 series runs came at an average of 115.50 and included his highest Test score, 205 not out at Port of Spain
Port of Spain
Port of Spain, also written as Port-of-Spain, is the capital of the Republic of Trinidad and Tobago and the country's third-largest municipality, after San Fernando and Chaguanas. The city has a municipal population of 49,031 , a metropolitan population of 128,026 and a transient daily population...
; his first-class average for the tour as a whole was 135.76. He made six consecutive Test 50s (77, 205 not out, 56, 123, 61 and 55) a new England record, since equaled by Ted Dexter
Ted Dexter
Edward Ralph Dexter CBE is a former English cricketer...
, Ken Barrington
Ken Barrington
Kenneth Frank Barrington , better known as Ken Barrington, played for the English cricket team and Surrey County Cricket Club in the 1950s and 1960s. He was a right-handed batsman and occasional leg-spin bowler, well known for his jovial good humour and long, defensive innings "batting with bulldog...
and Alastair Cook
Alastair Cook
Alastair Nathan Cook, MBE is an English international cricket player. He is a left-handed opening batsman who plays county cricket for Essex and International cricket for England, where he is their ODI captain. Cook played for Essex's Academy and made his debut for the first XI in 2003...
. Returning to England, he managed a top score of only 72 against the Australians, but in 1933 he topped 3,000 runs for the third and final time at the age of 44 and made his highest score of 301 not out.

In 1933 he invented a sort of helmet. Against the West Indies at Lord's he appeared wearing a rubber hat or cap with three peaks, two of which fitted over the sides of his head. Although a competent hooker of fast bowling he felt he needed extra protection to face bowlers such as Martindale and Constantine.

A famous anecdote appeared in the obituary of fast bowler Alf Gover, (Independent May 10, 2001):

"Patsy Hendren, by then a cagey veteran, introduced himself before Surrey's match against Middlesex, and hinted that he could no longer hook with the certainty of old and would therefore be grateful if young Alf spared him the bouncer – or "bumper", as the short, fast ball used to be called. True to his calling, Gover peppered Patsy, who unleashed his trademark hook and milked four after four from the perplexed bowler, plus a six into the Mound Stand."

He played his final Test match in 1934/1935 at Kingston, Jamaica
Kingston, Jamaica
Kingston is the capital and largest city of Jamaica, located on the southeastern coast of the island. It faces a natural harbour protected by the Palisadoes, a long sand spit which connects the town of Port Royal and the Norman Manley International Airport to the rest of the island...
, the game in which George Headley
George Headley
George Alphonso Headley was a West Indian cricketer who played 22 Test matches, mostly before the Second World War. Considered one of the best batsmen to play for West Indies and one of the greatest cricketers of all time, Headley also represented Jamaica and played professional club cricket in...
made 270 not out to win the series for the West Indians
West Indian cricket team
The West Indian cricket team, also known colloquially as the West Indies or the Windies, is a multi-national cricket team representing a sporting confederation of 15 mainly English-speaking Caribbean countries, British dependencies and non-British dependencies.From the mid 1970s to the early 1990s,...
, but continued to play well in domestic cricket for a few years more. Hendren's final season in the game was 1937, and fittingly he made a century in his last County Championship match, the local derby with Surrey
Surrey County Cricket Club
Surrey County Cricket Club is one of the 18 professional county clubs which make up the English and Welsh domestic cricket structure, representing the historic county of Surrey. Its limited overs team is called the Surrey Lions...
. He did, however, appear for "England Past and Present" against Sir PF Warner's
Plum Warner
Sir Pelham Francis Warner MBE , affectionately and better known as Plum Warner, or even "the Grand Old Man" of English cricket was a Test cricketer....
XI at Folkestone in September 1938, aged 49, but was caught by the 20-year-old Denis Compton
Denis Compton
Denis Charles Scott Compton CBE was an English cricketer who played in 78 Test matches, and a footballer...
for a duck in what was to be his very last first-class innings.

In 1919 he played in a Victory International for England. In retirement, he coached cricket at Harrow School
Harrow School
Harrow School, commonly known simply as "Harrow", is an English independent school for boys situated in the town of Harrow, in north-west London.. The school is of worldwide renown. There is some evidence that there has been a school on the site since 1243 but the Harrow School we know today was...
(succeeding Wilfred Rhodes) and Sussex
Sussex County Cricket Club
Sussex County Cricket Club is the oldest of the 18 major county clubs which make up the English and Welsh domestic cricket structure, representing the historic county of Sussex. The club was founded as a successor to Brighton Cricket Club which was a representative of the county of Sussex as a...
, and later acted as scorer for Middlesex (1952–1960). His health failed and he died in hospital from Alzheimer's disease
Alzheimer's disease
Alzheimer's disease also known in medical literature as Alzheimer disease is the most common form of dementia. There is no cure for the disease, which worsens as it progresses, and eventually leads to death...
at the Whittington Hospital Tooting Bec
Tooting Bec
Tooting Bec is a place in the London Borough of Wandsworth in south London.It is named after Bec Abbey in Normandy, which was given land in this area after the Norman Conquest. Saint Anselm, the second Abbot of Bec, is reputed to have been a visitor to Tooting Bec long before he succeeded...
, London
London
London is the capital city of :England and the :United Kingdom, the largest metropolitan area in the United Kingdom, and the largest urban zone in the European Union by most measures. Located on the River Thames, London has been a major settlement for two millennia, its history going back to its...
at the age of 73.