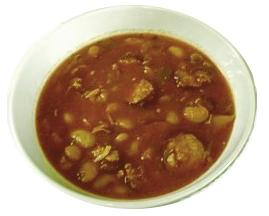 Pasulj is a white or brown bean
Bean
Bean is a common name for large plant seeds of several genera of the family Fabaceae used for human food or animal feed....
dish
Dish
Dish or DISH may refer to:*Dish, Texas*Dish , something prepared to be eaten*Dishware, plates and bowls for eating*Diffuse idiopathic skeletal hyperostosis, a form of arthritisEntertainment*Dish antenna a type of antenna...
, considered a traditional dish in Serbian
Serbian cuisine
Serbian cuisine is a heterogeneous cuisine, sharing characteristics of the Balkans , the Mediterranean , Turkish, and Central European cuisines....
and Bosnian cuisine, though it is nowadays popular throughout many Balkan nations. It is normally prepared with meat
Meat
Meat is animal flesh that is used as food. Most often, this means the skeletal muscle and associated fat and other tissues, but it may also describe other edible tissues such as organs and offal...
, particularly smoked meat
Smoked meat
Smoked meat is a method of preparing red meat which originates in prehistory. Its purpose is to preserve these protein-rich foods, which would otherwise spoil quickly, for long periods. There are two mechanisms for this preservation: dehydration and the antibacterial properties of absorbed smoke...
such as smoked bacon
Bacon
Bacon is a cured meat prepared from a pig. It is first cured using large quantities of salt, either in a brine or in a dry packing; the result is fresh bacon . Fresh bacon may then be further dried for weeks or months in cold air, boiled, or smoked. Fresh and dried bacon must be cooked before eating...
, smoked sausage
Sausage
A sausage is a food usually made from ground meat , mixed with salt, herbs, and other spices, although vegetarian sausages are available. The word sausage is derived from Old French saussiche, from the Latin word salsus, meaning salted.Typically, a sausage is formed in a casing traditionally made...
, or smoked joint
Joint
A joint is the location at which two or more bones make contact. They are constructed to allow movement and provide mechanical support, and are classified structurally and functionally.-Classification:...
s of tough meat such as ham hock
Ham hock
A ham hock or hough is the joint between the tibia/fibula and the metatarsals of the foot, where the foot was attached to the hog's leg...
s, pig's feet or rib
Rib
In vertebrate anatomy, ribs are the long curved bones which form the rib cage. In most vertebrates, ribs surround the chest, enabling the lungs to expand and thus facilitate breathing by expanding the chest cavity. They serve to protect the lungs, heart, and other internal organs of the thorax...
s.

The bean dish is eaten mostly during hot periods of the year because of low fat. Another version are the baked beans, in Serbia known as Prebranac.
The source of this article is wikipedia, the free encyclopedia.  The text of this article is licensed under the GFDL.