Encyclopedia
A joint is the location at which two or more bone
Bone
Bones are rigid organs that constitute part of the endoskeleton of vertebrates. They support, and protect the various organs of the body, produce red and white blood cells and store minerals. Bone tissue is a type of dense connective tissue...
s make contact. They are constructed to allow movement and provide mechanical support, and are classified structurally and functionally. 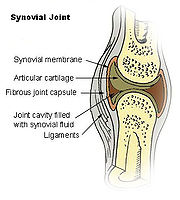 Terms ending in the suffix
Suffix
In linguistics, a suffix is an affix which is placed after the stem of a word. Common examples are case endings, which indicate the grammatical case of nouns or adjectives, and verb endings, which form the conjugation of verbs...
-sis are singular and refer to just one joint, while -ses is the suffix for pluralization.

Joints can also be classified functionally, by the degree of mobility they allow:

Joints can also be classified based on their anatomy or on their biomechanical properties. According to the anatomic classification, joints are subdivided into simple and compound, depending on the number of bones involved, and into complex and combination joints:


The joints may be classified anatomically into the following groups:

A joint disorder is termed an arthropathy
Arthropathy
-Scope:Arthritis is a form of arthropathy that involves inflammation of one or more joints, while the term arthropathy may be used regardless of whether there is inflammation or not.Spondylarthropathy is any form of arthropathy of the vertebral column....
, and when involving inflammation
Inflammation
Inflammation is part of the complex biological response of vascular tissues to harmful stimuli, such as pathogens, damaged cells, or irritants. Inflammation is a protective attempt by the organism to remove the injurious stimuli and to initiate the healing process...
of one or more joints the disorder is called an arthritis
Arthritis
Arthritis is a form of joint disorder that involves inflammation of one or more joints....
. Most joint disorders involve arthritis, but joint damage by external physical trauma
Physical trauma
Trauma refers to "a body wound or shock produced by sudden physical injury, as from violence or accident." It can also be described as "a physical wound or injury, such as a fracture or blow." Major trauma can result in secondary complications such as circulatory shock, respiratory failure and death...
is typically not termed arthritis.

Arthritis is the leading cause of disability in people over the age of 55. There are many different forms of arthritis, each of which has a different cause. The most common form of arthritis, osteoarthritis
Osteoarthritis
Osteoarthritis also known as degenerative arthritis or degenerative joint disease, is a group of mechanical abnormalities involving degradation of joints, including articular cartilage and subchondral bone. Symptoms may include joint pain, tenderness, stiffness, locking, and sometimes an effusion...
(also known as degenerative joint disease) occurs following trauma to the joint, following an infection of the joint or simply as a result of aging. Furthermore, there is emerging evidence that abnormal anatomy may contribute to early development of osteoarthritis. Other forms of arthritis are rheumatoid arthritis
Rheumatoid arthritis
Rheumatoid arthritis is a chronic, systemic inflammatory disorder that may affect many tissues and organs, but principally attacks synovial joints. The process produces an inflammatory response of the synovium secondary to hyperplasia of synovial cells, excess synovial fluid, and the development...
and psoriatic arthritis
Psoriatic arthritis
Psoriatic arthritis is a type of inflammatory arthritis that, according to the National Psoriasis Foundation, will develop in up to 30 percent of people who have the chronic skin condition psoriasis...
, which are autoimmune diseases in which the body is attacking itself. Septic arthritis
Septic arthritis
Septic arthritis is the purulent invasion of a joint by an infectious agent which produces arthritis. People with artificial joints are more at risk than the general population but have slightly different symptoms, are infected with different organisms and require different treatment. Septic...
is caused by joint infection
Infection
An infection is the colonization of a host organism by parasite species. Infecting parasites seek to use the host's resources to reproduce, often resulting in disease...
. Gouty arthritis
Gout
Gout is a medical condition usually characterized by recurrent attacks of acute inflammatory arthritis—a red, tender, hot, swollen joint. The metatarsal-phalangeal joint at the base of the big toe is the most commonly affected . However, it may also present as tophi, kidney stones, or urate...
is caused by deposition of uric acid
Uric acid
Uric acid is a heterocyclic compound of carbon, nitrogen, oxygen, and hydrogen with the formula C5H4N4O3. It forms ions and salts known as urates and acid urates such as ammonium acid urate. Uric acid is created when the body breaks down purine nucleotides. High blood concentrations of uric acid...
crystals in the joint that results in subsequent inflammation. Additionally, there is a less common form of gout that is caused by the formation of rhomboidal shaped crystals of calcium pyrophosphate. This form of gout is known as pseudogout.