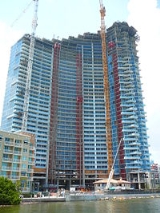 Encyclopedia
Paramount Bay is a high-rise condominium building in the Edgewater Neighborhood, adjacent to the Omni District of Miami, Florida
Florida
Florida is a state in the southeastern United States, located on the nation's Atlantic and Gulf coasts. It is bordered to the west by the Gulf of Mexico, to the north by Alabama and Georgia and to the east by the Atlantic Ocean. With a population of 18,801,310 as measured by the 2010 census, it...
, United States
United States
The United States of America is a federal constitutional republic comprising fifty states and a federal district...
. It stands 554.92 feet (169.1 m), with 47 floors. The building was topped off in late 2009. It was designed by the Arquitectonica
Arquitectonica
Arquitectonica is an international architecture, landscape architecture, interior design and urban planning corporation headquartered in Miami, Florida, United States in the Coconut Grove neighborhood, with offices in ten other cities throughout the world...
architectural firm, and recently, I-Star Financial and ST Residential have take control of the project and are reinventing the property to bring to market in the second quarter of 2011. Fortune International is the current asset manager, and Fortune Development Sales has been retained for Sales and Marketing.
As originally envisioned, Paramount Bay would far surpass the standard residences in this neighborhood on the Biscayne Bay. Ownership and Fortune International are currently interviewing the top designers in the World to finish the residences and public spaces.
Paramount Bay is designed with 3 towers seamlessly connected and flowing with a curvature reminiscent of Miami Modern Architecture from the 50's and 60's.
With this design, the building offers direct views of Biscayne Bay
Biscayne Bay
Biscayne Bay is a lagoon that is approximately 35 miles long and up to 8 miles wide located on the Atlantic coast of South Florida, United States. It is usually divided for purposes of discussion and analysis into three parts: North Bay, Central Bay, and South Bay. Its area is...
from every condominium unit.
The building has been designed with many luxury and state-of-the-art features. These include private elevator foyers for each unit, touch-screen hospitality service panels, individual garden terraces for penthouse units, technology concierge, membership in the Grand Bay Club at Key Biscayne, and many more amenities and services unparalleled in any building in Miami or the world. The 10 Penthouse residences all offer in excess of 2500 square feet (232.3 m²) of entertaining space.