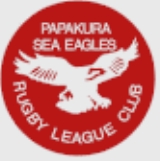 To date seven players from the club have represented the New Zealand Kiwis: