Encyclopedia
Pan is the innermost moon of Saturn
Saturn
Saturn is the sixth planet from the Sun and the second largest planet in the Solar System, after Jupiter. Saturn is named after the Roman god Saturn, equated to the Greek Cronus , the Babylonian Ninurta and the Hindu Shani. Saturn's astronomical symbol represents the Roman god's sickle.Saturn,...
. It is a walnut
Walnut
Juglans is a plant genus of the family Juglandaceae, the seeds of which are known as walnuts. They are deciduous trees, 10–40 meters tall , with pinnate leaves 200–900 millimetres long , with 5–25 leaflets; the shoots have chambered pith, a character shared with the wingnuts , but not the hickories...
-shaped small moon about 35 kilometres across and 23 km high that orbits within the Encke Gap in Saturn's A Ring. Pan acts as a ring shepherd and is responsible for keeping the Encke Gap free of ring particles.

It was discovered by Mark R. Showalter in 1990 from analysis of old Voyager 2 probe photos and received the provisional designation because the discovery images dated back to 1981.

The existence of a moon in the Encke Gap was first predicted by Jeffrey N. Cuzzi and Jeffrey D. Scargle in 1985, based on wavy edges of the gap which indicated a gravitational disturbance. In 1986 Showalter et al. inferred its orbit and mass by modeling its gravitational wake. They arrived at a very precise prediction of 133,603 ± 10 km for the semi-major axis and a mass of 5–10Saturn masses, and inferred that there was only a single moon within the Encke gap. The actual semi-major axis differs by 19 km and the actual mass is 8.6 of Saturn's.

The moon was later found within 1° of the predicted position. The search was undertaken by considering all Voyager 2
Voyager 2
The Voyager 2 spacecraft is a 722-kilogram space probe launched by NASA on August 20, 1977 to study the outer Solar System and eventually interstellar space...
images and using a computer calculation to predict whether the moon would be visible under sufficiently favorable conditions in each one. Every qualifying Voyager 2 image with resolution better than ~50 km/pixel shows Pan clearly. In all, it appears in eleven Voyager 2 images.

The eccentricity of Pan's orbit causes its distance from Saturn to vary by ~4 km. Its inclination
Inclination
Inclination in general is the angle between a reference plane and another plane or axis of direction.-Orbits:The inclination is one of the six orbital parameters describing the shape and orientation of a celestial orbit...
, which would cause it to move up and down, is not distinguishable from zero with present data. The Encke Gap, within which Pan orbits, is about 325 km wide.

Cassini
Cassini-Huygens
Cassini–Huygens is a joint NASA/ESA/ASI spacecraft mission studying the planet Saturn and its many natural satellites since 2004. Launched in 1997 after nearly two decades of gestation, it includes a Saturn orbiter and an atmospheric probe/lander for the moon Titan, although it has also returned...
scientists have described Pan as "walnut
Walnut
Juglans is a plant genus of the family Juglandaceae, the seeds of which are known as walnuts. They are deciduous trees, 10–40 meters tall , with pinnate leaves 200–900 millimetres long , with 5–25 leaflets; the shoots have chambered pith, a character shared with the wingnuts , but not the hickories...
-shaped" owing to the equatorial ridge
Equatorial ridge
Equatorial ridges are a feature of at least three of Saturn's moons: the large moon Iapetus and the tiny moons Atlas and Pan. They are ridges that follow closely the moon's equator. They appear to be unique to the Saturnian system, but it is uncertain whether the occurrences are related or a...
, similar to that on Atlas
Atlas (moon)
Atlas is an inner satellite of Saturn.Atlas was discovered by Richard Terrile in 1980 from Voyager photos and was designated '. In 1983 it was officially named after Atlas of Greek mythology, because it "holds the rings on its shoulders" like the Titan Atlas held the sky up above the Earth...
, that is visible in images. The ridge is due to ring material that Pan has swept up from the Encke gap. 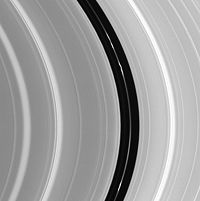 The Encke Gap contains a ringlet that is coincident with Pan's orbit, indicating that Pan maintains the particles in horseshoe orbit
Horseshoe orbit
A horseshoe orbit is a type of co-orbital motion of a small orbiting body relative to a larger orbiting body . The orbital period of the smaller body is very nearly the same as for the larger body, and its path appears to have a horseshoe shape in a rotating reference frame as viewed from the...
s. A second ringlet is periodically disrupted by Pan similarly to how the F Ring is disturbed by Prometheus
Prometheus (moon)
-Animations:-External links:* at ** anaglyph view of Prometheus...
.

The moon was named on 16 September 1991, after the mythological Pan
Pan (mythology)
Pan , in Greek religion and mythology, is the god of the wild, shepherds and flocks, nature, of mountain wilds, hunting and rustic music, as well as the companion of the nymphs. His name originates within the Greek language, from the word paein , meaning "to pasture." He has the hindquarters, legs,...
, who was (among other things) the god of shepherds. This is a reference to Pan's role as a shepherd moon. It is also designated .

There is also an asteroid
Asteroid
Asteroids are a class of small Solar System bodies in orbit around the Sun. They have also been called planetoids, especially the larger ones...
called 4450 Pan
4450 Pan
4450 Pan is an asteroid that was discovered on September 25, 1987 by Eugene and Carolyn Shoemaker. It is a Venus, Mars, and Earth crosser. Pan approaches nearer than 10 Gm to those three planets, and within 20 Gm of Mercury.-External links:...
.