Encyclopedia
Palimos ng Pag-ibig is a Filipino drama
Philippine drama
Philippine drama can be classified into different forms and genres, with the most popular being the teleserye and teledrama. The teleserye/teledrama is a television form of melodramatic serialized fiction. It is rooted from two words: "tele", which is short for "television," and "serye", a Tagalog...
series aired by ABS-CBN
ABS-CBN
ABS–CBN Corporation is a Philippine-based media conglomerate. It is the Philippines' largest media and entertainment conglomerate. The corporation was the merger of Alto Broadcasting System which at that time owned by James Lindenberg and Antonio Quirino, and the Chronicle Broadcasting Network ...
in 2007. It is a remake
Remake
A remake is a piece of media based primarily on an earlier work of the same medium.-Film:The term "remake" is generally used in reference to a movie which uses an earlier movie as the main source material, rather than in reference to a second, later movie based on the same source...
of the 1985 film of the same name. The series is the first installment of Sineserye Presents
Sineserye Presents
Sineserye Presents is a primetime show broadcast by ABS-CBN. It literally means a film serialized to a TV series which is the show's concept.-Origins:...
.

Palimos ng Pag-ibig was first serialized in Komiks
Komiks
Comics in the Philippines were partially inspired by American mainstream comic strips and comic books during the early 20th century, particularly after World War II, the medium became widespread and popular throughout the country, though its popularity has subsided somewhat with the advent of...
before it was translated in the big screen. Nerissa Cabral was the creator and writer of the story.

In this dog-eat-dog world, you either have to stand up and carve a living for yourself or risk getting trampled by others in the rat race called life. This is the dilemma Ditas (Kristine Hermosa) has faced each and every day of her life. Born to a destitute family, Ditas has resigned her self to the fact that her life will be a struggle; but, still having the strong resolve to make it in life, no matter what. As such, Ditas won't let her lowly stature in life hamper dreams of a promising future. She makes a living by selling her babies to the highest bidder, a lucrative job that was problem-free until a well-to-do couple approached her one day and changed the rules of the game.

The picture-perfect couple Rodel (Diether Ocampo) and Fina (Rica Peralejo) are young, good-looking, rich. The couple couldn't wish for anything more since they seemingly have everything anyone could ever want. With one exception. Both Rodel and Fina are eager to start a family; unfortunately for them, it's an impossibility as Fina's medical condition prohibits her from bearing children. When they hear rumors about a certain babymaker, who happens to be Ditas, the couple sees an opportunity to finally fill the void in their lives.

Problems arise when Rodel perceives qualities in Ditas that he deems his wife is lacking. Soon, the casual business deal becomes entangled and a more intimate relationship develop between Rodel and Ditas. But how about Fina? Now, she must do everything to make the family whole again even if means having to beg Rodel for his once undivided love and affection. 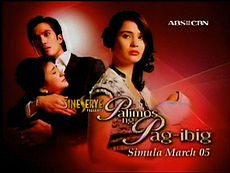