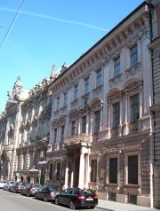 Encyclopedia
The Palais Porcia is a Baroque
Baroque architecture
Baroque architecture is a term used to describe the building style of the Baroque era, begun in late sixteenth century Italy, that took the Roman vocabulary of Renaissance architecture and used it in a new rhetorical and theatrical fashion, often to express the triumph of the Catholic Church and...
mansion in Munich
Munich
Munich The city's motto is "" . Before 2006, it was "Weltstadt mit Herz" . Its native name, , is derived from the Old High German Munichen, meaning "by the monks' place". The city's name derives from the monks of the Benedictine order who founded the city; hence the monk depicted on the city's coat...
, southern Germany
Germany
Germany , officially the Federal Republic of Germany , is a federal parliamentary republic in Europe. The country consists of 16 states while the capital and largest city is Berlin. Germany covers an area of 357,021 km2 and has a largely temperate seasonal climate...
, which served as residence for Count Fugger. It is Munich's oldest still existing Baroque style palace. 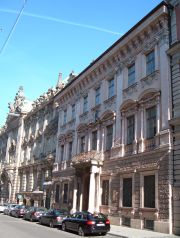 Enrico Zuccalli
Enrico Zuccalli
Enrico Zuccalli, was a Swiss architect who worked for the Wittelsbach regents of Bavaria and Cologne....
built the mansion in Italian baroque style in 1693 for the Count Fugger. In 1710 it was bought by Count Törring and in 1731 by Elector Charles Albert
Charles VII, Holy Roman Emperor
Charles VII Albert a member of the Wittelsbach family, was Prince-elector of Bavaria from 1726 and Holy Roman Emperor from 24 January 1742 until his death in 1745...
. His architect François de Cuvilles restored the mansion in 1736 in Rococo
Rococo
Rococo , also referred to as "Late Baroque", is an 18th-century style which developed as Baroque artists gave up their symmetry and became increasingly ornate, florid, and playful...
style for the countess Topor-Morawitzka, a mistress of Charles Albert. The mansion is named after her husband, Prince Porcia. In 1819 a concert hall was integrated by Métivier for the "Museum", a cultural association which had acquired the mansion. In 1934 the Palais Porcia was acquired by a bank. The restoration after the destruction during World War II took place in 1950-1952.
The source of this article is wikipedia, the free encyclopedia.  The text of this article is licensed under the GFDL.