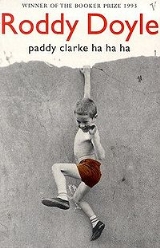 Encyclopedia
Paddy Clarke Ha Ha Ha is a novel by Irish
Irish people
The Irish people are an ethnic group who originate in Ireland, an island in northwestern Europe. Ireland has been populated for around 9,000 years , with the Irish people's earliest ancestors recorded having legends of being descended from groups such as the Nemedians, Fomorians, Fir Bolg, Tuatha...
writer Roddy Doyle
Roddy Doyle
Roddy Doyle is an Irish novelist, dramatist and screenwriter. Several of his books have been made into successful films, beginning with The Commitments in 1991. He won the Booker Prize in 1993....
. It won the Booker Prize
Man Booker Prize
The Man Booker Prize for Fiction is a literary prize awarded each year for the best original full-length novel, written in the English language, by a citizen of the Commonwealth of Nations, Ireland, or Zimbabwe. The winner of the Man Booker Prize is generally assured of international renown and...
in 1993. The story is about a 10 year old boy and events that happen within his age group. He also has to cope with his parents' deteriorating relationship.

The novel is known for its interesting use of language – Doyle uses a register
Register (linguistics)
In linguistics, a register is a variety of a language used for a particular purpose or in a particular social setting. For example, when speaking in a formal setting an English speaker may be more likely to adhere more closely to prescribed grammar, pronounce words ending in -ing with a velar nasal...
(syntax
Syntax
In linguistics, syntax is the study of the principles and rules for constructing phrases and sentences in natural languages....
and vocabulary
Vocabulary
A person's vocabulary is the set of words within a language that are familiar to that person. A vocabulary usually develops with age, and serves as a useful and fundamental tool for communication and acquiring knowledge...
) that gives the reader the vivid impression of listening to the memories of a ten-year-old Irish boy from the 1960s. The novel is not divided into chapters but into small scenes which do not follow any chronological order. As such, a reader's first impression is perhaps that of humoured confusion. One forgets easily what one reads and then, peculiarly, it may be that one does not have to remember most of the details but rather the emotions evoked from the language and reactions of Paddy; for his language is beautifully childlike, vulgar at times, sprinkled with Irish colloquialisms, but true in mimicking the way an actual boy would speak if asked to narrate his own life to an adult.

The plot structure of the novel is also unconventional, that of numerous vignettes: Doyle starts with an incident, a fire, and uses it to link to past events that had anything to do with fire, and then when exhausted, Doyle moves us on to something else. Despite the absence of a clear-cut plot (introduction, complication, climax, dénouement) one can still, with certain sensitivities in place, derive a perceptible passing of time as we witness, gradually, how Barrytown changes.

The novel is sometimes referred to as a bildungsroman
Bildungsroman
In literary criticism, bildungsroman or coming-of-age story is a literary genre which focuses on the psychological and moral growth of the protagonist from youth to adulthood , and in which character change is thus extremely important...
, a term used to describe books which centre on the main character's development. Paddy's growing up is painfully bitter. While the beginning of the book is filled with playful antics, the growing antagonism between his parents and the breaking up of their marriage is evident as the novel moves on. What makes Paddy's rite of passage, as it were, all the more tragic is the fact that he does not choose his "journey of enlightenment and maturity", rather, it is robbed of him when his parents become abusive towards one another.
The source of this article is wikipedia, the free encyclopedia.  The text of this article is licensed under the GFDL.