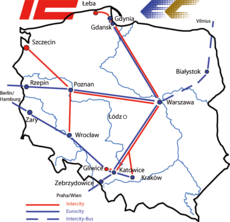 PKP Intercity is a company of PKP Group
PKP Group
PKP Group is a Polish conglomerate founded in 2001 from the former single national rail operator, Polskie Koleje Państwowe. The purpose of this change was to match European Union directives of dividing transport service from rail system management and founding separate companies able to sell their...
responsible for long-distance passenger transport. It runs about 350 trains daily, connecting mainly large aglomerations and smaller towns, also servicing most of the international trains.


A high speed rail
High-speed rail in Poland
As of December 2009, Poland had 700–800 km of railways suited for rail transport reaching 160 km/h. An additional 1,500 km are expected by 2015, including some sections allowing 200 km/h. While previously the Polish government had invested primarily in Poland's road network,...
system is planned. 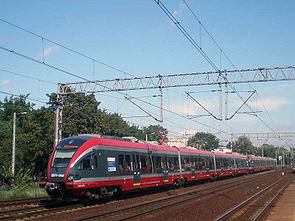 Fast trains without reservation were transferred to PKP Intercity from PKP Przewozy Regionalne on December 1, 2008. They were all converted to TLK on December 13, 2009.

Most of the EkspresInterCity trains were degraded to the re-introduced Express category on June 1st, 2011.

PKP Intercity also operates a bus
Coach (vehicle)
A coach is a large motor vehicle, a type of bus, used for conveying passengers on excursions and on longer distance express coach scheduled transport between cities - or even between countries...
service on the route Warsaw-Vilnius
Vilnius
Vilnius is the capital of Lithuania, and its largest city, with a population of 560,190 as of 2010. It is the seat of the Vilnius city municipality and of the Vilnius district municipality. It is also the capital of Vilnius County...
.