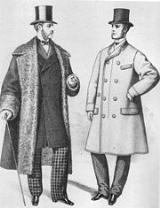 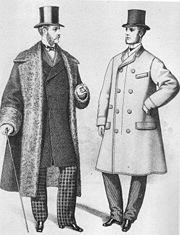 An overcoat is a type of long coat
Coat (clothing)
A coat is a long garment worn by both men and women, for warmth or fashion. Coats typically have long sleeves and are open down the front, closing by means of buttons, zippers, hook-and-loop fasteners, toggles, a belt, or a combination of some of these...
intended to be worn as the outermost garment. Overcoats usually extend below the knee, but are sometimes mistakenly referred to as topcoats, which are short coats that end at or above the knees. Topcoats and overcoats together are known as outercoats. Unlike overcoats, topcoats are usually made from lighter weight cloth such as gabardine or covert, while overcoats are made from heavier cloth or fur, because overcoats are more commonly used in winter when warmth is more important.


History of the overcoat

In many countries, coats and gowns reaching below the knee have been worn for centuries, often for formal uses, establishing either social status or as part of a professional or military uniform. In the 17th century, the overcoat became widely stylised and available to the different classes.

In the West, the general profile of overcoats has remained largely unchanged for a long time. During the Regency, the fashion was to have very form-fitting clothes, with sidebodies, waist seams, and a flared skirt. Examples of this included the frock overcoat and paletot. This gradually shifted to the looser styles more common now, typified by the Chesterfield coat
Chesterfield coat
The Chesterfield coat is a long, tailored overcoat. It arose along with the lounge suit as an alternative to the highly shaped coats it replaced, such as the frock overcoat with its heavy waist suppression using a waist seam. The Chesterfield has no horizontal seam or sidebodies, but can still be...
, which became popular by the end of the Victorian
Victorian fashion
Victorian fashion comprises the various fashions and trends in British culture that emerged and grew in province throughout the Victorian era and the reign of Queen Victoria, a period which would last from June 1837 to January 1901. Covering nearly two thirds of the 19th century, the 63 year reign...
period. Until then, most coats were double breasted, but Chesterfields and accompanying styles like the guard's coat were worn in single and double breasted varieties.

More recently, there is a decline in the wearing of full-length overcoats, and double breasted ones are much less common.


Military use of the overcoat 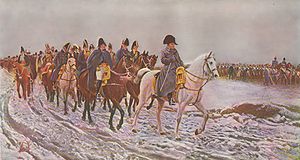 Overcoats in various forms have been used by militaries since at least the late 18th century, and were especially associated with winter campaigns, such as Napoleon's Russian campaign. The full length overcoat was once again popularised by the use during World War I of the trench coat
Trench coat
A trench coat or trenchcoat is a raincoat made of waterproof heavy-duty cotton drill or poplin, wool gabardine, or leather. It generally has a removable insulated lining; and it is usually knee-length.-History:...
.

Stereotypically, overcoats used by the army tended to be single-breasted, while navies often used double-breasted overcoats. Overcoats continued to be used as battle dress until the mid 1940s and 1950s, when they were deemed impractical. However, in colder countries, such as the former USSR, they continue to be issued and used. When more efficient clothing and synthetic fibres became readily available, the overcoat began to be phased out even there. 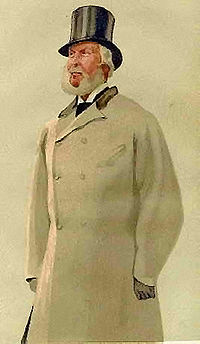 We note here some of the most common historical overcoats, in roughly chronological order.
|

| The Greatcoat
Greatcoat
A greatcoat, also known as a watchcoat, is a large overcoat typically made of wool designed for warmth and protection against the weather. Its collar and cuffs can be turned out to protect the face and hands from cold and rain, and the short cape around the shoulders provides extra warmth and...
, a voluminous overcoat with multiple shoulder capes, prominently featured by European militaries, most notably the former Soviet Union
|-
|

| The Redingote
Redingote
The redingote is a type of coat that has had several forms over time. The name is derived from a French alteration of the English "riding coat", an example of reborrowing.-Women's redingote:...
(via French from English riding coat), a long fitted coat for men or women
|-
|

| The Ulster coat
Ulster coat
The Ulster was originally a Victorian working daytime overcoat, with a cape and sleeves. It is often seen in period productions of Victorian novels, such as those of Charles Dickens and was referred to in the Sherlock Holmes stories A Study In Scarlet, The Adventure of the Noble Bachelor and The...
, a working daytime overcoat initially with a cape top covering sleeves, but then without; it evolved to the polo coat after losing its cape
|-
|

| The Paletot coat, a coat shaped with sidebodies, as a slightly less formal alternative to the frock overcoat
|-
|

| The Paddock coat, with even less shaping
|-
|

| The Chesterfield coat
Chesterfield coat
The Chesterfield coat is a long, tailored overcoat. It arose along with the lounge suit as an alternative to the highly shaped coats it replaced, such as the frock overcoat with its heavy waist suppression using a waist seam. The Chesterfield has no horizontal seam or sidebodies, but can still be...
, a long overcoat with very little waist suppression; being the equivalent of the 'sack suit' for clothes, it came to be the most important overcoat of the next half-century
|-
|
| The Covert coat, a classically brown/fawn, straight cut, single breasted country coat that became accepted for wear in the city with a suit as well as with tweed. It has a signature four lines of stitching at the cuffs and hem. It also had a fly front closure and 2 side pockets. The collar is sometimes made of velvet.
|}>
The source of this article is wikipedia, the free encyclopedia.  The text of this article is licensed under the GFDL.