Encyclopedia
Ovarian follicles are the basic units of female reproductive biology, each of which is composed of roughly spherical aggregations of cell
Cell (biology)
The cell is the basic structural and functional unit of all known living organisms. It is the smallest unit of life that is classified as a living thing, and is often called the building block of life. The Alberts text discusses how the "cellular building blocks" move to shape developing embryos....
s found in the ovary
Ovary
The ovary is an ovum-producing reproductive organ, often found in pairs as part of the vertebrate female reproductive system. Ovaries in anatomically female individuals are analogous to testes in anatomically male individuals, in that they are both gonads and endocrine glands.-Human anatomy:Ovaries...
. They contain a single oocyte
Oocyte
An oocyte, ovocyte, or rarely ocyte, is a female gametocyte or germ cell involved in reproduction. In other words, it is an immature ovum, or egg cell. An oocyte is produced in the ovary during female gametogenesis. The female germ cells produce a primordial germ cell which undergoes a mitotic...
(immature ovum
Ovum
An ovum is a haploid female reproductive cell or gamete. Both animals and embryophytes have ova. The term ovule is used for the young ovum of an animal, as well as the plant structure that carries the female gametophyte and egg cell and develops into a seed after fertilization...
or egg). These structures are periodically initiated to grow and develop, culminating in ovulation
Ovulation
Ovulation is the process in a female's menstrual cycle by which a mature ovarian follicle ruptures and discharges an ovum . Ovulation also occurs in the estrous cycle of other female mammals, which differs in many fundamental ways from the menstrual cycle...
of usually a single competent oocyte in humans. These eggs/ova are only developed once every menstrual cycle
Menstrual cycle
The menstrual cycle is the scientific term for the physiological changes that can occur in fertile women for the purpose of sexual reproduction. This article focuses on the human menstrual cycle....
(e.g. once a month in humans). 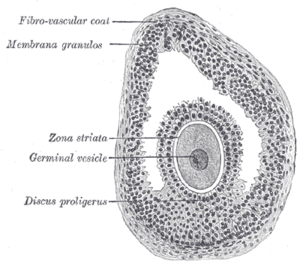 The cells of the ovarian follicle are the oocyte
Oocyte
An oocyte, ovocyte, or rarely ocyte, is a female gametocyte or germ cell involved in reproduction. In other words, it is an immature ovum, or egg cell. An oocyte is produced in the ovary during female gametogenesis. The female germ cells produce a primordial germ cell which undergoes a mitotic...
, granulosa cells and the cells of the internal and external theca
Theca
A theca refers to any case, covering, or sheath.In botany, the theca of an angiosperm consists a pair of microsporangia that are adjacent to each other and share a common area of dehiscence called the stomium. Any part of a microsporophyll that bears microsporangia is called an anther. Most...
layers.

Each month, one of the ovaries releases a mature egg, known as an oocyte. A follicle is an anatomical structure in which the primary oocyte develops. The nucleus of such an oocyte is called a germinal vesicle

Granulosa cells within the follicle surround the oocyte; their numbers increase directly in response to heightened levels of circulating gonadotropins or decrease in response to testosterone
Testosterone
Testosterone is a steroid hormone from the androgen group and is found in mammals, reptiles, birds, and other vertebrates. In mammals, testosterone is primarily secreted in the testes of males and the ovaries of females, although small amounts are also secreted by the adrenal glands...
. They also produce peptides involved in ovarian hormone synthesis regulation. Follicle-stimulating hormone
Follicle-stimulating hormone
Follicle-stimulating hormone is a hormone found in humans and other animals. It is synthesized and secreted by gonadotrophs of the anterior pituitary gland. FSH regulates the development, growth, pubertal maturation, and reproductive processes of the body. FSH and Luteinizing hormone act...
(FSH) induces granulosa cells to express luteinizing hormone
Luteinizing hormone
Luteinizing hormone is a hormone produced by the anterior pituitary gland. In females, an acute rise of LH called the LH surge triggers ovulation and development of the corpus luteum. In males, where LH had also been called interstitial cell-stimulating hormone , it stimulates Leydig cell...
(LH) receptors on their surfaces; when circulating LH binds to these receptors, proliferation stops.

The granulosa cells, in turn, are enclosed in a thin layer of extracellular matrix
Extracellular matrix
In biology, the extracellular matrix is the extracellular part of animal tissue that usually provides structural support to the animal cells in addition to performing various other important functions. The extracellular matrix is the defining feature of connective tissue in animals.Extracellular...
– the follicular basement membrane or basal lamina (fibro-vascular coat in picture). Outside the basal lamina, the layers theca interna
Theca interna
Theca interna cells express receptors for luteinizing hormone to produce androstenedione, which via a few steps, gives the granulosa the precursor for estrogen manufacturing....
and theca externa
Theca externa
The theca externa is the outer layers of the theca folliculi. They contain smooth muscle and abundant collagen. During ovulation, the surge in luteinizing hormone increases cAMP which increases progesterone and PGF2α production. The PGF2α induces the contraction of the smooth muscle cells of the...
are found.

In humans, oocytes are established in the ovary before birth and may lie dormant awaiting initiation for up to 50 years.

After rupturing, the follicle is turned into a corpus luteum
Corpus luteum
The corpus luteum is a temporary endocrine structure in mammals, involved in production of relatively high levels of progesterone and moderate levels of estradiol and inhibin A...
.


Development of oocytes in ovarian follicles

In a larger perspective, the whole folliculogenesis from primordial to preovulatory follicle is located in the stage of meiosis I of ootidogenesis in oogenesis.

The embryo
Embryo
An embryo is a multicellular diploid eukaryote in its earliest stage of development, from the time of first cell division until birth, hatching, or germination...
nic development doesn't differ from the male one, but follows the common path before gametogenesis
Gametogenesis
Gametogenesis is a biological process by which diploid or haploid precursor cells undergo cell division and differentiation to form mature haploid gametes. Depending on the biological life cycle of the organism, gametogenesis occurs by meiotic division of diploid gametocytes into various gametes,...
. Once gametogonia enter the gonadal ridge
Gonadal ridge
In embryology, the gonadal ridge is the precursor to the gonads. The gonadal ridge initially consists mainly of mesenchyme and cells of underlying mesonephric origin. Once oogonia enter this area they attempt to associate with these somatic cells...
, however, they attempt to associate with these somatic cells. Development proceeds and the gametogonia turns into oogonia, which become fully surrounded by a layer of cells (pre-granulosa cells).

The Oogonia multiply by dividing mitotically; this proliferation ends when the oogonia enter meiosis. The amount of time that oogonia multiply by mitosis is not species specific. In the human fetus, cells undergoing mitosis are seen until the second and third trimester of pregnancy. After beginning the meiotic process, the oogonia (now called primary oocytes) can no longer replicate. Therefore the total number of gametes is established at this time. Once the primary oocytes stop dividing the cells enter a prolonged ‘resting phase’. This ‘resting phase’ or dictyate
Dictyate
The dictyate or dictyotene is a prolonged resting phase in oogenesis. It occurs in the stage of meiotic prophase I in ootidogenesis. It starts late in fetal life and is terminated shortly before ovulation by the LH surge...
stage can last anywhere up to fifty years in the human.

For several primary oocytes that undergoes meiosis, only one functional oocyte is produced. The other two or three cells produced are called polar bodies. Polar bodies have no function and eventually deteriorate.

The primary oocyte turns into a secondary oocyte in mature ovarian follicles. Unlike the sperm, the egg is arrested in the secondary stage of meiosis until fertilization.

Upon fertilization by sperm, the secondary oocyte continues the second part of meiosis and becomes a zygote
Zygote
A zygote , or zygocyte, is the initial cell formed when two gamete cells are joined by means of sexual reproduction. In multicellular organisms, it is the earliest developmental stage of the embryo...
.

Follicles can develop from ovarian
Ovary
The ovary is an ovum-producing reproductive organ, often found in pairs as part of the vertebrate female reproductive system. Ovaries in anatomically female individuals are analogous to testes in anatomically male individuals, in that they are both gonads and endocrine glands.-Human anatomy:Ovaries...
tissue after cryopreservation
Cryopreservation
Cryopreservation is a process where cells or whole tissues are preserved by cooling to low sub-zero temperatures, such as 77 K or −196 °C . At these low temperatures, any biological activity, including the biochemical reactions that would lead to cell death, is effectively stopped...
. Cryopreservation of ovarian tissue is of interest to women who want to preserve their reproductive function beyond the natural limit, or whose reproductive potential is threatened by cancer therapy, for example in hematologic malignancies or breast cancer.

For in vitro
In vitro
In vitro refers to studies in experimental biology that are conducted using components of an organism that have been isolated from their usual biological context in order to permit a more detailed or more convenient analysis than can be done with whole organisms. Colloquially, these experiments...
culture of follicles, there are various techniques to optimize the growth of follicles, including the use of defined media, growth factor
Growth factor
A growth factor is a naturally occurring substance capable of stimulating cellular growth, proliferation and cellular differentiation. Usually it is a protein or a steroid hormone. Growth factors are important for regulating a variety of cellular processes....
s and three-dimensional extracellular matrix support. Molecular methods and immunoassay
Immunoassay
An immunoassay is a biochemical test that measures the presence or concentration of a substance in solutions that frequently contain a complex mixture of substances. Analytes in biological liquids such as serum or urine are frequently assayed using immunoassay methods...
can evaluate stage of maturation and guide adequate differentiation.