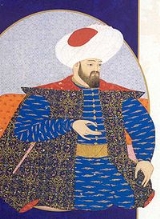 Osman announced the independence of his own small kingdom from the Seljuk Turks in 1299.

What happened in the ottoman empire during Osman I time?
More
x