Encyclopedia
Orval Abbey is a Cistercian monastery
Monastery
Monastery denotes the building, or complex of buildings, that houses a room reserved for prayer as well as the domestic quarters and workplace of monastics, whether monks or nuns, and whether living in community or alone .Monasteries may vary greatly in size – a small dwelling accommodating only...
founded in 1132 in the Gaume
Gaume
Gaume is a region in the far south of Belgium. Situated at a lower altitude than the Ardennes, it is delineated by borders with France, Luxembourg and the Belgian Ardennes. Gaume is the roman part of the Belgian Lorraine region...
region of Belgium
Belgium
Belgium , officially the Kingdom of Belgium, is a federal state in Western Europe. It is a founding member of the European Union and hosts the EU's headquarters, and those of several other major international organisations such as NATO.Belgium is also a member of, or affiliated to, many...
and is located in Villers-devant-Orval, part of Florenville
Florenville
Florenville is a Walloon municipality located in the Belgian province of Luxembourg. On 1 January 2007 the municipality had 5,448 inhabitants. The total area is 146.91 km², giving a population density of 37.1 inhabitants per km²....
in the province of Luxembourg. The abbey is well-known for its history and spiritual life but also for its local production of a Trappist beer
Trappist beer
A Trappist beer is a beer brewed by or under control of Trappist monks. There are a total of 174 Trappist monasteries worldwide ; only seven produce Trappist beer and are authorized to label their beers with the Authentic Trappist Product logo that indicates a compliance to the various rules of...
(see Brasserie d'Orval) and a specific cheese. 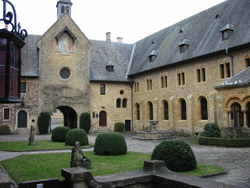 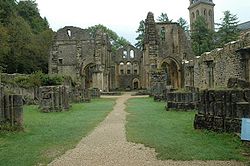 The site has been occupied since the Merovingian period, and there is evidence that there was already a chapel here in the 10th century. In 1070, a group of Benedictine monk
Monk
A monk is a person who practices religious asceticism, living either alone or with any number of monks, while always maintaining some degree of physical separation from those not sharing the same purpose...
s from Calabria
Calabria
Calabria , in antiquity known as Bruttium, is a region in southern Italy, south of Naples, located at the "toe" of the Italian Peninsula. The capital city of Calabria is Catanzaro....
settled here, at the invitation of Arnould, Count of Chiny
Chiny
Chiny is a Walloon municipality of Belgium located in the province of Luxembourg.On 1 January 2007 the municipality, which covers , had 5,021 inhabitants, giving a population density of 44.2 inhabitants per km²...
, and began construction of a church and a monastery, but after some forty years, possibly because of the death of Count Arnould, they moved away again. They were replaced by a community of Canons Regular
Canon (priest)
A canon is a priest or minister who is a member of certain bodies of the Christian clergy subject to an ecclesiastical rule ....
, who completed the construction work: the abbey church was consecrated on 30 September 1124.

In 1132, a group of Cistercian monks from Trois-Fontaines Abbey in Champagne
Champagne (province)
The Champagne wine region is a historic province within the Champagne administrative province in the northeast of France. The area is best known for the production of the sparkling white wine that bears the region's name...
arrived, and the two groups formed a single community within the Cistercian Order, under the first abbot, Constantin.

Around 1252, the monastery was destroyed by a fire; the rebuilding took around 100 years.

In the literary field the monks of Orval did not much distinguish themselves. The only noteworthy writer was Aegidius or Gilles d'Orval, who lived in the first half of the thirteenth century. He wrote the continuation, to the year 1251, of the "Gesta Pontificum Leodiensium", which had been written up to the year 1048 by Heriger of Lobbes and Anselm of Liège (Mon. Germ. Script., XXV, 1-129). http://www.newadvent.org/cathen/11331b.htm

During the 15th and 16th centuries, the various wars between France
France
The French Republic , The French Republic , The French Republic , (commonly known as France , is a unitary semi-presidential republic in Western Europe with several overseas territories and islands located on other continents and in the Indian, Pacific, and Atlantic oceans. Metropolitan France...
and various neighbouring regions (Burgundy
Duchy of Burgundy
The Duchy of Burgundy , was heir to an ancient and prestigious reputation and a large division of the lands of the Second Kingdom of Burgundy and in its own right was one of the geographically larger ducal territories in the emergence of Early Modern Europe from Medieval Europe.Even in that...
, Spain
Spain
Spain , officially the Kingdom of Spain languages]] under the European Charter for Regional or Minority Languages. In each of these, Spain's official name is as follows:;;;;;;), is a country and member state of the European Union located in southwestern Europe on the Iberian Peninsula...
) had an important impact on Orval. At one stage a foundry was established on the site. In 1637, during the Thirty Years' War
Thirty Years' War
The Thirty Years' War was fought primarily in what is now Germany, and at various points involved most countries in Europe. It was one of the most destructive conflicts in European history....
, the abbey was pillaged and burnt by French mercenaries.

In the 17th century, the abbey converted to the Trappist
TRAPPIST
TRAPPIST is Belgian robotic telescope in Chile which came online in 2010, and is an acronym for TRAnsiting Planets and PlanetesImals Small Telescope, so named in homage to Trappist beer produced in the Belgian region. Situated high in the Chilean mountains at La Silla Observatory, it is actually...
branch of the Cistercian order, but reverted back to the Rule of the main order in around 1785.

In 1793, during the French Revolution
French Revolution
The French Revolution , sometimes distinguished as the 'Great French Revolution' , was a period of radical social and political upheaval in France and Europe. The absolute monarchy that had ruled France for centuries collapsed in three years...
, the abbey was completely burnt down by French forces, in retaliation for the hospitality it had provided to Austria
Austria
Austria , officially the Republic of Austria , is a landlocked country of roughly 8.4 million people in Central Europe. It is bordered by the Czech Republic and Germany to the north, Slovakia and Hungary to the east, Slovenia and Italy to the south, and Switzerland and Liechtenstein to the...
n troops, and the community dispersed.

In 1887, the land and ruins were acquired by the Harenne family. They donated the lands to the Cistercian order in 1926 so that monastic life could resume on the site. Between 1926 and 1948, under the direction of the Trappist monk Marie-Albert van der Cruyssen, the new monastery was constructed, and in 1935 Orval regained the rank of abbey. On 8 September 1948, the new church was consecrated.

The ruins of the medieval buildings remain on the site and are available to view.


The legend of Orval

There is a legend of the abbey's foundation, purporting to explain the name '"Orval" and the coat of arms. According to this, the widowed Mathilda of Tuscany was visiting the site, when she lost her wedding ring in a spring, to her great distress. When she prayed for the return of the ring, a trout appeared on the surface of the water with the ring in its mouth. She exclaimed "Truly this place is a Val d'Or (Golden Valley)", from which the name "Orval" is derived, and in gratitude made available the funds for the foundation of the monastery here. The abbey arms show the trout and ring. The spring still supplies water to the monastery and its brewery.