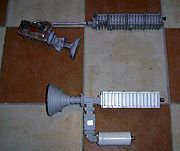 An orthomode transducer is a microwave duct component of the class of microwave circulators. It is commonly referred to as an OMT, and commonly referred as a polarisation duplexer. Such device may be part of a VSAT antenna feed
Antenna feed
In telecommunications and electronics, an antenna feed refers to the components of an antenna which feed the radio waves to the rest of the antenna structure, or in receiving antennas collect the incoming radio waves, convert them to electric currents and transmit them to the receiver...
Orthomode transducers serve either to combine or to separate two microwave signal paths. One of the paths forms the uplink
Uplink
A telecommunications link is generally one of several types of information transmission paths such as those provided by communication satellites to connect two points on earth.-Uplink:...
, which is transmitted over the same waveguide
Waveguide (electromagnetism)
In electromagnetics and communications engineering, the term waveguide may refer to any linear structure that conveys electromagnetic waves between its endpoints. However, the original and most common meaning is a hollow metal pipe used to carry radio waves...
as the received signal path, or downlink path. For VSAT modems the transmission and reception paths are at 90° to each other, or in other words, the signals are orthogonally polarised with respect to each other. This orthogonal shift between the two signal paths provides approximately an isolation of 40dB in the Ku band
Ku band
The Kμ band is a portion of the electromagnetic spectrum in the microwave range of frequencies. This symbol refers to —in other words, the band directly below the K-band...
and Ka band
Ka band
The Ka band covers the frequencies of 26.5–40 GHz. The Ka band is part of the K band of the microwave band of the electromagnetic spectrum. This symbol refers to "K-above" — in other words, the band directly above the K-band...
radio frequency bands.

Hence this device serves in an essential role as the junction element of the outdoor, unit (ODU) of a VSAT modem. It protects the receiver front-end element (the low-noise block converter
Low-noise block converter
A low-noise block downconverter is the receiving device of a parabolic satellite dish antenna of the type commonly used for satellite TV reception...
, LNB) from burn-out by the power of the output signal generated by the block up converter
Block upconverter
A block upconverter is used in the transmission of satellite signals. It converts a band of frequencies from a lower frequency to a higher frequency. Modern BUCs convert from the L band to Ku band, C band and Ka band...
(BUC). The BUC is also connected to the feed horn
Feed horn
In satellite dish and antenna design, a feedhorn is a small horn antenna used to convey radio waves between the transmitter and/or receiver and the reflector, particularly in parabolic antennas...
through a wave guide port of the OMT junction device.

Orthomode transducer
Transducer
A transducer is a device that converts one type of energy to another. Energy types include electrical, mechanical, electromagnetic , chemical, acoustic or thermal energy. While the term transducer commonly implies the use of a sensor/detector, any device which converts energy can be considered a...
s are used in dual-polarised Very small aperture terminal
Very small aperture terminal
A very-small-aperture terminal , is a two-way satellite ground station or a stabilized maritime Vsat antenna with a dish antenna that is smaller than 3 meters. The majority of VSAT antennas range from 75 cm to 1.2 m. Data rates typically range from 56 kbps up to 4 Mbps...
s (VSATs), in sparsely populated areas, radar antennas, radiometer
Radiometer
A radiometer is a device for measuring the radiant flux of electromagnetic radiation. Generally, the term radiometer denotes an infrared radiation detector, yet it also includes detectors operating on any electromagnetic wavelength....
s, and communications links. They are usually connected to the antenna's down converter or LNB and to the High Power Amplifier (HPA) attached to a transmitting antenna
Antenna (radio)
An antenna is an electrical device which converts electric currents into radio waves, and vice versa. It is usually used with a radio transmitter or radio receiver...
.

Wherever there are two polarisations of radio signals (Horizontal and Vertical), the transmitted and received radio signal to and fro the antenna are said to be “orthogonal”. This means that the modulation planes of the two radio signal waves are at 90 degrees angles to each other. The OMT device is used to separate two equal frequency signals, of high and low signal power.
Protective separation is essential as the transmitter unit would seriously damage the very sensitive low (µV) micro-voltage, front-end receiver amplifier unit at the antenna.

The transmission signal of the up-link, of relatively high power (1, 2,or 5 watts for common VSAT equipment) originating from BUC,(block up converter) and the very low power received signal power (µ-volts) coming from the antenna (aerial) to the LNB receiver unit, in this case are at an angle of 90° relative to each other, are both coupled together at the feed-horn focal-point of the Parabolic antenna. The device that unites both up-link and down-link paths, which are at 90° to each other, is known as an Orthogonal Mode Transducer OMT.

In the VSAT Ku band
Ku band
The Kμ band is a portion of the electromagnetic spectrum in the microwave range of frequencies. This symbol refers to —in other words, the band directly below the K-band...
of operation case, a typical OMT Orthomode Transducer provides a 40dB isolation between each of the connected radio ports to the feed horn that faces the parabolic dish reflector (40dB means that only 0.01% of the transmitter's output power is cross-fed into the receiver's wave guide port).
The port facing the parabolic reflector of the antenna is a circular polarizing port so that horizontal and vertical polarity coupling of inbound and outbound radio signal is easily achieved.

The 40dB isolation provides essential protection to the very sensitive receiver amplifier against burn out from the relatively high-power signal of the transmitter unit. Further isolation may be obtained by means of selective radio frequency filtering to achieve an isolation of 100dB (100dB means that only a 10−10 fraction of the transmitter's output power is cross-fed into the wave guide port of the receiver).

The following images show a Portenseigne & Hirschmann Ku band configuration, that highlights the horizontal the vertical, and circular polarized wave-guide ports that join to the Feed-horn, the LNB or BUC elements of an outdoor unit.

VSAT specific training that demonstrates the use of the Orthomode Transducer (OMT):