In July 1997, ICI Australia became an independent Australasian company after its parent company, ICI Plc, divested its 62.4 per cent shareholding in the company.

As a result of the selldown ICI Australia was required to change its name and on 2 February 1998 became known as Orica.

In 2010, Orica successfully demerged DuluxGroup leaving the company 90 percent focussed on the provision of services to the mining, construction and infrastructure industries.

Orica's revenue in 2010 was A$
Australian dollar
The Australian dollar is the currency of the Commonwealth of Australia, including Christmas Island, Cocos Islands, and Norfolk Island, as well as the independent Pacific Island states of Kiribati, Nauru and Tuvalu...
6.5 billion, with a market capitalization of about $9.3 billion. The company employs about 14,000 people worldwide. Net profit after tax was $676 million. 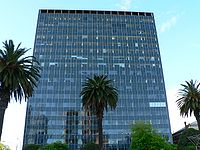 On September 10th, 2007, 28 people were killed and over 250 injured as a result of an accident between a pick-up and a truck which resulted in an explosion. The truck was transporting about 25 metric tons of ammonium nitrate for the company Orica near the cities of Monclova
Monclova
On the other hand, temperatures during late spring and summer can have bouts of extreme heat, with evenings above 40°C for many consecutive days. In recent decades the hottest records have climbed as high as 43°C on July 13, 2005 and 45°C on May 4, 1984. However nighttime low temperatures are...
and Cuatro Cienegas
Cuatro Ciénegas
Cuatro Ciénegas is a city in the northern Mexican state of Coahuila. It stands at , at an average elevation of 740 metres above sea level. The city serves as the municipal seat for the surrounding municipality of the same name....
. Exact numbers of the dead and injured vary according to source, but Orica's website state there were a total of 28 fatalities in 2007 - one worker and 27 contractors/members of the public.

Production of chlorinated solvents over many years by ICI has resulted in significant contamination of the Botany Aquifer
Aquifer
An aquifer is a wet underground layer of water-bearing permeable rock or unconsolidated materials from which groundwater can be usefully extracted using a water well. The study of water flow in aquifers and the characterization of aquifers is called hydrogeology...
, a high quality sand aquifer located below the eastern suburbs of Sydney. The main chemical contaminant found in groundwater around the old ICI site is EDC (ethylene di-chloride) a persistent organic molecule and byproduct of the manufacture of PVC. Orica has built a A$167M Groundwater Treatment Plant to achieve containment of this contamination and provide high quality industrial water to Botany Industrial Park. Water produced by Orica's groundwater treatment plant saves Sydney's potable water supply around 5 mega litres per day (approx 0.5% of Sydney's water demand).

Throughout August and November 2011 Orica had 4 major chemicals or leaks, the first one was a leak of hexavalent chromium
Hexavalent chromium
Hexavalent chromium refers to chemical compounds that contain the element chromium in the +6 oxidation state. Virtually all chromium ore is processed via hexavalent chromium, specifically the salt sodium dichromate. Approximately of hexavalent chromium were produced in 1985...
from its ammonium nitrate plant near Stockton
Stockton, New South Wales
Stockton is a suburb of Newcastle, New South Wales, Australia, located from Newcastle's central business district. It is the only suburb of Newcastle that lies north of the Hunter River.-Geography:...
that effected 70 households, the second one was the release of Arsenic
Arsenic
Arsenic is a chemical element with the symbol As, atomic number 33 and relative atomic mass 74.92. Arsenic occurs in many minerals, usually in conjunction with sulfur and metals, and also as a pure elemental crystal. It was first documented by Albertus Magnus in 1250.Arsenic is a metalloid...
into the Hunter River
Hunter River
The Hunter River is a major river in New South Wales, Australia. The Hunter River rises in the Liverpool Range and flows generally south and then east, reaching the Pacific Ocean at Newcastle, the second largest city in New South Wales and a major port....
at Newcastle
Newcastle, New South Wales
The Newcastle metropolitan area is the second most populated area in the Australian state of New South Wales and includes most of the Newcastle and Lake Macquarie Local Government Areas...
, the third was of mercury vapours from its Botany
Botany, New South Wales
Botany is a suburb in south-eastern Sydney, in the state of New South Wales, Australia. Botany is located 10 kilometres south of the Sydney central business district and is part of the City of Botany Bay....
site, and the fourth was a leak of ammonia
Ammonia
Ammonia is a compound of nitrogen and hydrogen with the formula . It is a colourless gas with a characteristic pungent odour. Ammonia contributes significantly to the nutritional needs of terrestrial organisms by serving as a precursor to food and fertilizers. Ammonia, either directly or...
from their site at Kooragang Island
Kooragang Island
Kooragang Island is located in the Hunter River of New South Wales, Australia and is the site of a deep water port for the export of coal. In 2007, 84.8 million metric tons of coal were exported from the port, making it one of the busiest in the world...
. The fourth leak has triggered a public forum and NSW Government investigation into the leaks, and the temporary shut down of the Kooragang Island plant.