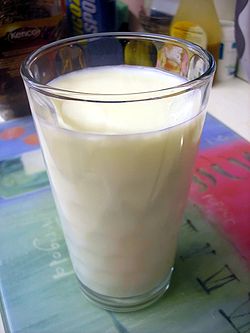 Organic milk is defined by the USDA as milk
Milk
Milk is a white liquid produced by the mammary glands of mammals. It is the primary source of nutrition for young mammals before they are able to digest other types of food. Early-lactation milk contains colostrum, which carries the mother's antibodies to the baby and can reduce the risk of many...
from cows that have been exclusively fed organic feed, have not been treated with synthetic hormones
Growth hormone
Growth hormone is a peptide hormone that stimulates growth, cell reproduction and regeneration in humans and other animals. Growth hormone is a 191-amino acid, single-chain polypeptide that is synthesized, stored, and secreted by the somatotroph cells within the lateral wings of the anterior...
, are not given certain medications to treat sickness. [Citation Needed]

According to the Organic Consumers Association
Organic Consumers Association
The Organic Consumers Association is a consumer protection and organic agriculture advocacy group based in Finland, Minnesota. It was formed in 1998 in the wake of the mass backlash by organic consumers against the U.S. Department of Agriculture's controversial proposed regulations for organic food...
, organic milk is produced without synthetic chemicals, hormones or antibiotics. Dairy industry sources claim that there is no difference in terms of quality and safety between regular milk and organic milk, and a Monsanto
Monsanto
The Monsanto Company is a US-based multinational agricultural biotechnology corporation. It is the world's leading producer of the herbicide glyphosate, marketed in the "Roundup" brand of herbicides, and in other brands...
study concluded that both types of milk contain the same nutrients. Organic milk proponents argue that these studies did not look at the additional health impacts of herbicides, fertilizers, pesticides, and hormones that are used in the production of non-organic milk, and that these chemicals have been shown to increase the risk of eczema, other allergies, and cancers. Some academic studies have found that organically produced food and organic milk in particular, tends to contain significantly higher levels of nutrients generally held to be healthy.

Milk may be processed with ultra-high-temperature
Ultra-high-temperature processing
Ultra-high temperature processing, ultra-heat treatment , or ultra-pasteurization is the sterilization of food by heating it for an extremely short period, around 1–2 seconds, at a temperature exceeding 135°C , which is the temperature required to kill spores in milk...
(UHT) used to prolong its shelf life
Shelf life
Shelf life is the length of time that food, drink, medicine, chemicals, and many other perishable items are given before they are considered unsuitable for sale, use, or consumption...
. In some regions with low demand for fresh organic produce, organic milk may only be available in this form.