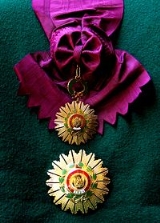 Encyclopedia
The Order of the Sun is the highest award bestowed by the nation of Peru
Peru
Peru , officially the Republic of Peru , is a country in western South America. It is bordered on the north by Ecuador and Colombia, on the east by Brazil, on the southeast by Bolivia, on the south by Chile, and on the west by the Pacific Ocean....
to commend notable civil and military merit. The award is the oldest civilian award in the Americas
Americas
The Americas, or America , are lands in the Western hemisphere, also known as the New World. In English, the plural form the Americas is often used to refer to the landmasses of North America and South America with their associated islands and regions, while the singular form America is primarily...
, first being established in 1821.

The Order was originally instituted on 8 October 1821 by General José de San Martín on reaching Lima
Lima
Lima is the capital and the largest city of Peru. It is located in the valleys of the Chillón, Rímac and Lurín rivers, in the central part of the country, on a desert coast overlooking the Pacific Ocean. Together with the seaport of Callao, it forms a contiguous urban area known as the Lima...
to recognize those who had distinguished themselves in the campaign against the Spanish Royalist
Spanish Empire
The Spanish Empire comprised territories and colonies administered directly by Spain in Europe, in America, Africa, Asia and Oceania. It originated during the Age of Exploration and was therefore one of the first global empires. At the time of Habsburgs, Spain reached the peak of its world power....
. It was discontinued four years later.

The Order was re-established in 1921.

The award consists of five classes: