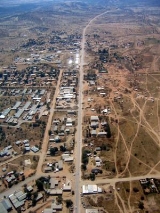 Encyclopedia
Opuwo is the capital of the Kunene Region
Kunene Region
Kunene is one of the thirteen regions of Namibia and home to the Himba ethnic group. Compared to the rest of Namibia, it is relatively underdeveloped...
in north-western Namibia
Namibia
Namibia, officially the Republic of Namibia , is a country in southern Africa whose western border is the Atlantic Ocean. It shares land borders with Angola and Zambia to the north, Botswana to the east and South Africa to the south and east. It gained independence from South Africa on 21 March...
. The town is situated about 720 km north-northwest from the capital Windhoek
Windhoek
Windhoek is the capital and largest city of the Republic of Namibia. It is located in central Namibia in the Khomas Highland plateau area, at around above sea level. The 2001 census determined Windhoek's population was 233,529...
, and has a population of 5,100. Pieter de Villiers
Pieter de Villiers (politician)
Pieter de Villiers is a Namibian politician. A member of the Congress of Democrats , Villiers is the mayor of Opuwo, capital of the Kunene Region.-References:...
of the Congress of Democrats
Congress of Democrats
The Congress of Democrats is a political party in Namibia, led by Ben Ulenga. It is an opposition party represented in the National Assembly.The party is an observer of the Socialist International.- 2004 elections :...
is the town's mayor.

The first office to be established in the area was the colonial administrator in Kaoko in 1997, which was located at the Swartbooi’s Drift on the banks of the Kunene River before the location's name was changed to Opuwo. This police station was run by Sergeant Herbert, and his aim was to receive the Angola Boers who had trekked to Angola
Angola
Angola, officially the Republic of Angola , is a country in south-central Africa bordered by Namibia on the south, the Democratic Republic of the Congo on the north, and Zambia on the east; its west coast is on the Atlantic Ocean with Luanda as its capital city...
out of refusal to accept the British government in South Africa
South Africa
The Republic of South Africa is a country in southern Africa. Located at the southern tip of Africa, it is divided into nine provinces, with of coastline on the Atlantic and Indian oceans...
. Sergeant Basson took over the office at Swartbooi‘s Drift, and excavated Opuwo's first bore hole. Basson had the nickname “Katjiriamakaja” (a person who eats tobacco).

The name Opuwo was given by the commissioner of Ondangwa, Mr. Hugo Hahn, who came in search of land to build an office. Upon his arrival, he asked local headmen to give him land where he could build an office. The headmen gave him a small plot, and when the headmen tried to give him more land, Mr. Hahn responded saying "Opuwo (it’s enough for me). I don’t want any more land". That is how Opuwo got its name. The local residents of Opuwo called it Otjihinamaparero at the time, and some still call it that.

Hugo Hahn called the land “Ohopoho Otjitopora” which means "they see the bore hole and their water comes out". The name Otjihinamaparero was changed to Opuwo in 1974 due to orthographic reform.