Encyclopedia
Operation Archery, also known as the Vaagso Raid, was a British Combined Operations raid during World War II
World War II
World War II, or the Second World War , was a global conflict lasting from 1939 to 1945, involving most of the world's nations—including all of the great powers—eventually forming two opposing military alliances: the Allies and the Axis...
against German
Nazi Germany
Nazi Germany , also known as the Third Reich , but officially called German Reich from 1933 to 1943 and Greater German Reich from 26 June 1943 onward, is the name commonly used to refer to the state of Germany from 1933 to 1945, when it was a totalitarian dictatorship ruled by...
positions on Vaagso Island (Nor
Norwegian language
Norwegian is a North Germanic language spoken primarily in Norway, where it is the official language. Together with Swedish and Danish, Norwegian forms a continuum of more or less mutually intelligible local and regional variants .These Scandinavian languages together with the Faroese language...
:Vågsøy
Vågsøy
Vågsøy is a municipality in the county of Sogn og Fjordane, Norway. It is located in the traditional district of Nordfjord. The municipality's administrative center is the town Måløy. Vågsøy is also the name of the main island in the municipality with an area of...
), Norway, on 27 December 1941.

The raid was conducted by British Commandos
British Commandos
The British Commandos were formed during the Second World War in June 1940, following a request from the British Prime Minister, Winston Churchill, for a force that could carry out raids against German-occupied Europe...
of No. 3 Commando
No. 3 Commando
No. 3 Commando was a battalion-sized commando unit raised by the British Army for service during the Second World War. Formed in July 1940 from volunteers for special service, it was the first such unit to carry the title of "Commando"...
, two troops of No.2 Commando, a medical detachment of No.4 Commando, a demolition party from 101 Troop (canoe) of No. 6 Commando
No. 6 Commando
No. 6 Commando was a battalion-sized British Army commando unit of the Second World War. Although it was raised to conduct small-scale raids and harass garrisons along the coast of German-occupied France, it was mainly employed as a highly-trained infantry assault unit.Formed in July 1940, No...
and a dozen Norwegian
Norway
Norway , officially the Kingdom of Norway, is a Nordic unitary constitutional monarchy whose territory comprises the western portion of the Scandinavian Peninsula, Jan Mayen, and the Arctic archipelago of Svalbard and Bouvet Island. Norway has a total area of and a population of about 4.9 million...
s from Norwegian Independent Company 1
Norwegian Independent Company 1
Norwegian Independent Company 1 was a British SOE group formed in March 1941 originally for the purpose of performing commando raids during the Occupation of Norway by Nazi Germany. It was organized under the leadership of Captain Martin Linge...
. The action was supported by Royal Navy
Royal Navy
The Royal Navy is the naval warfare service branch of the British Armed Forces. Founded in the 16th century, it is the oldest service branch and is known as the Senior Service...
gunfire, led by the light cruiser
Light cruiser
A light cruiser is a type of small- or medium-sized warship. The term is a shortening of the phrase "light armored cruiser", describing a small ship that carried armor in the same way as an armored cruiser: a protective belt and deck...
, with the destroyer
Destroyer
In naval terminology, a destroyer is a fast and maneuverable yet long-endurance warship intended to escort larger vessels in a fleet, convoy or battle group and defend them against smaller, powerful, short-range attackers. Destroyers, originally called torpedo-boat destroyers in 1892, evolved from...
s , , and . The submarine was in support as the force navigational check. For troop transport the and were used. Also in support were Royal Air Force
Royal Air Force
The Royal Air Force is the aerial warfare service branch of the British Armed Forces. Formed on 1 April 1918, it is the oldest independent air force in the world...
bombers and fighter-bombers.

The commando force of 570 troops was divided into five with these objectives.

Central to the operation was the destruction of fish-oil production and stores which the Germans used in the manufacture of high explosives. Another intention was to cause the Germans to maintain and increase forces in Norway which otherwise might be employed on the Eastern Front
Eastern Front (World War II)
The Eastern Front of World War II was a theatre of World War II between the European Axis powers and co-belligerent Finland against the Soviet Union, Poland, and some other Allies which encompassed Northern, Southern and Eastern Europe from 22 June 1941 to 9 May 1945...
.

The dawn landing was preceded by a very effective naval bombardment and objectives went according to plan except in the town of Måløy
Måløy
is a town and the administrative centre of the municipality of Vågsøy in Sogn og Fjordane county, Norway. Måløy is located on the southeastern side of the island of Vågsøy, about northeast of the village of Holvik and about south of Raudeberg. The Måløybrua connects the town to the village of...
itself. Opposition there was much stiffer than expected as unknown to the British, a gebirgsjäger
Gebirgsjäger
Gebirgsjäger, in English Mountain Riflemen, is the German designation for mountain infantry. The word Jäger is the traditional German term for rifleman...
(mountain troops) unit of experienced troops from the Eastern Front was there on leave.

Their experience in sniping
Sniper
A sniper is a marksman who shoots targets from concealed positions or distances exceeding the capabilities of regular personnel. Snipers typically have specialized training and distinct high-precision rifles....
and street fighting caused the operation to develop into a bitter house-to-house battle. This caused the commander, John Durnford-Slater
John Durnford-Slater
John Frederick Durnford-Slater, DSO & Bar was a British Army officer who was credited with raising the first Army commando unit during the Second World War....
, to call in the floating reserve and troops from Vågsøy Island. A number of local citizens assisted the commandos by acting as porters for ammunition
Ammunition
Ammunition is a generic term derived from the French language la munition which embraced all material used for war , but which in time came to refer specifically to gunpowder and artillery. The collective term for all types of ammunition is munitions...
, grenade
Grenade
A grenade is a small explosive device that is projected a safe distance away by its user. Soldiers called grenadiers specialize in the use of grenades. The term hand grenade refers any grenade designed to be hand thrown. Grenade Launchers are firearms designed to fire explosive projectile grenades...
s and other explosives, and in carrying away the wounded.

At around 14:00, the commandos started their withdrawal having destroyed four factories, the fish-oil stores, ammunition and fuel stores, the telephone exchange
Telephone exchange
In the field of telecommunications, a telephone exchange or telephone switch is a system of electronic components that connects telephone calls...
and various military installations. Much of the town was in flames. The naval assault force of one cruiser and four destroyers had meanwhile sunk 10 vessels, some found in the act of being scuttled to prevent capture. 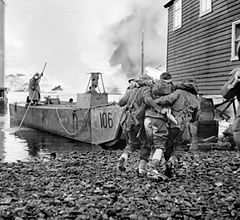 No Royal Navy ships were lost, but the navy suffered four men killed and four wounded. The Commandos sustained 17 killed and 53 wounded, the commander of the Norwegians, Capt. Linge
Martin Linge
Martin Jensen Linge was a former Norwegian actor who, in World War II, became the commander of the Norwegian Independent Company 1 , formed in March 1941 for operations on behalf of the Special Operations Executive.-Biography:Martin Linge was born in Norddal, Møre og Romsdal County, Norway...
, was killed in an attack on the local German headquarters, and the Royal Air Force had eight planes downed. The commandos accounted for at least 120 enemy killed and returned with 98 prisoners and a complete copy of the German Naval Code
Cryptanalysis of the Enigma
Cryptanalysis of the Enigma enabled the western Allies in World War II to read substantial amounts of secret Morse-coded radio communications of the Axis powers that had been enciphered using Enigma machines. This yielded military intelligence which, along with that from other decrypted Axis radio...
. Several Quisling
Quisling regime
The Quisling regime, or the Quisling government are common names used to refer to the collaborationist government led by Vidkun Quisling in occupied Norway during the Second World War. The official name of the regime from 1 February 1942 until its dissolution in May 1945 was Nasjonale regjering...
s and a number of loyal Norwegians were also brought back. In conjunction with this raid, Operation Anklet
Operation Anklet
Operation Anklet was the codename given to a British Commando raid during the Second World War. The raid on the Lofoten Islands was carried out in December 1941, by 300 men from No. 12 Commando and the Norwegian Independent Company 1. The landing party was supported by 22 ships from three navies.At...
was mounted by No. 12 Commando
No. 12 Commando
No. 12 Commando was a battalion-sized commando unit of the British Army during the Second World War. Formed in 1940 in Northern Ireland, they carried out a number of small-scale raids in Norway and France between 1941 and 1943 before being disbanded and its personnel dispersed to other commando...
on the Lofoten Islands as a diversion.

The raid was enough to persuade Adolf Hitler
Adolf Hitler
Adolf Hitler was an Austrian-born German politician and the leader of the National Socialist German Workers Party , commonly referred to as the Nazi Party). He was Chancellor of Germany from 1933 to 1945, and head of state from 1934 to 1945...
to divert 30,000 troops to Norway, upgrade coastal and inland defences. Hitler thought that the British might invade northern Norway to put pressure on Sweden
Sweden
Sweden , officially the Kingdom of Sweden , is a Nordic country on the Scandinavian Peninsula in Northern Europe. Sweden borders with Norway and Finland and is connected to Denmark by a bridge-tunnel across the Öresund....
and Finland
Finland
Finland , officially the Republic of Finland, is a Nordic country situated in the Fennoscandian region of Northern Europe. It is bordered by Sweden in the west, Norway in the north and Russia in the east, while Estonia lies to its south across the Gulf of Finland.Around 5.4 million people reside...
.
The source of this article is wikipedia, the free encyclopedia.  The text of this article is licensed under the GFDL.