Encyclopedia
Aphrodite and Anvil were the World War II
World War II
World War II, or the Second World War , was a global conflict lasting from 1939 to 1945, involving most of the world's nations—including all of the great powers—eventually forming two opposing military alliances: the Allies and the Axis...
code name
Code name
A code name or cryptonym is a word or name used clandestinely to refer to another name or word. Code names are often used for military purposes, or in espionage...
s of United States Army Air Forces
United States Army Air Forces
The United States Army Air Forces was the military aviation arm of the United States of America during and immediately after World War II, and the direct predecessor of the United States Air Force....
and United States Navy
United States Navy
The United States Navy is the naval warfare service branch of the United States Armed Forces and one of the seven uniformed services of the United States. The U.S. Navy is the largest in the world; its battle fleet tonnage is greater than that of the next 13 largest navies combined. The U.S...
operations to use B-17
B-17 Flying Fortress variants
The following is an extensive catalogue of the variants and specific unique elements of each variant and/or design stage of the Boeing B-17 Flying Fortress heavy bomber...
and PB4Y bombers as precision-guided munition
Precision-guided munition
A precision-guided munition is a guided munition intended to precisely hit a specific target, and to minimize damage to things other than the target....
s against bunkers such as those of Operation Crossbow
Operation Crossbow
Crossbow was the code name of the World War II campaign of Anglo-American "operations against all phases of the German long-range weapons programme—operations against research and development of the weapons, their manufacture, transportation and their launching sites, and against missiles in flight"...
.

The plan called for B-17 aircraft which had been taken out of operational service (various nicknames existed such as 'robot', 'baby', 'drone' or 'weary Willy') to be loaded to capacity with explosive
Explosive material
An explosive material, also called an explosive, is a reactive substance that contains a great amount of potential energy that can produce an explosion if released suddenly, usually accompanied by the production of light, heat, sound, and pressure...
s, and flown by radio control into bomb-resistant fortifications such as German U-boat
U-boat
U-boat is the anglicized version of the German word U-Boot , itself an abbreviation of Unterseeboot , and refers to military submarines operated by Germany, particularly in World War I and World War II...
pens and V-weapon sites. It was hoped that this would match the British success with Tallboy
Tallboy bomb
The Tallboy or Bomb, Medium Capacity, 12,000 lb, was an earthquake bomb developed by the British aeronautical engineer Barnes Wallis and deployed by the RAF in 1944...
and Grand Slam
Grand Slam bomb
The Grand Slam was a 22,000 lb earthquake bomb used by RAF Bomber Command against strategic targets during the Second World War.Known officially as the Bomb, Medium Capacity, 22,000 lb, it was a scaled up version of the Tallboy bomb and closer to the original size that the bombs' inventor,...
supersonic ground penetration bombs but the project was dangerous, expensive and unsuccessful. 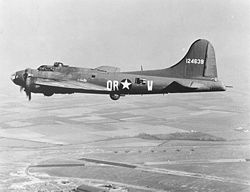 By late 1943, Maj. Gen. Henry H. Arnold
Henry H. Arnold
Henry Harley "Hap" Arnold was an American general officer holding the grades of General of the Army and later General of the Air Force. Arnold was an aviation pioneer, Chief of the Air Corps , Commanding General of the U.S...
had directed Brig. Gen. Grandison Gardner's electronic engineers at Eglin Field, Florida, to outfit war-weary bombers with automatic pilots so that they could be remotely controlled. The plan was first proposed to Major General
Major General
Major general or major-general is a military rank used in many countries. It is derived from the older rank of sergeant major general. A major general is a high-ranking officer, normally subordinate to the rank of lieutenant general and senior to the ranks of brigadier and brigadier general...
James H. Doolittle
Jimmy Doolittle
General James Harold "Jimmy" Doolittle, USAF was an American aviation pioneer. Doolittle served as a brigadier general, major general and lieutenant general in the United States Army Air Forces during the Second World War...
some time in 1944. Doolittle approved the plan on June 26, and assigned the 3rd Bombardment Division with preparing and flying the drone aircraft, which was to be designated BQ-7. Final assignment of responsibility was given to the 562nd Bomb Squadron
562d Flying Training Squadron
The 562d Flying Training Squadron was part of the 12th Flying Training Wing based at Randolph Air Force Base, Texas. It operated the T-43 conducting navigator training.-History:...
at RAF Honington
RAF Honington
RAF Honington is a Royal Air Force station located south of Thetford near Ixworth in Suffolk, England. Although used as a bomber station during the Second World War, RAF Honington is now the RAF Regiment depot and home to the Joint CBRN Regiment.-RAF use:...
in Suffolk
Suffolk
Suffolk is a non-metropolitan county of historic origin in East Anglia, England. It has borders with Norfolk to the north, Cambridgeshire to the west and Essex to the south. The North Sea lies to the east...
. Similarly, on July 6, 1944 the US Navy Special Attack Unit (SAU-1) was formed under ComAirLant, with Commander James A. Smith, Officer in Charge, for transfer without delay to Commander Fleet Air Wing 7 in Europe to attack German V-1 and V-2 sites
V-2 rocket facilities of World War II
V-2 rocket facilities were military installations associated with Nazi Germany's V-2 ballistic rocket, including bunkers and small launch pads which were never operationally used.-Development, testing, and production facilities:...
with PB4Y-1's converted to assault drones.

Old B-17 Flying Fortress bombers were stripped of all normal combat armament and all other non-essential gear (armor, guns, bomb racks, transceiver
Transceiver
A transceiver is a device comprising both a transmitter and a receiver which are combined and share common circuitry or a single housing. When no circuitry is common between transmit and receive functions, the device is a transmitter-receiver. The term originated in the early 1920s...
, seats, etc.), relieving about 12000 lb (5,443.1 kg) of weight. To allow easier exit when the pilot and co-pilot were to parachute out, the canopy  was removed. Azon
Azon
AZON was one of the world's first smart bombs, deployed by the Allies and contemporary with the German Fritz X.Officially designated VB-1 , it was invented by Major Henry J. Rand and Thomas J...
radio remote-control
Radio control
Radio control is the use of radio signals to remotely control a device. The term is used frequently to refer to the control of model vehicles from a hand-held radio transmitter...
equipment was added, with two television cameras fitted in the cockpit to allow a view of both the ground and the main instrumentation panel to be transmitted back to an accompanying CQ-17 'mothership'. The drone was loaded with more than twice a B-17's normal bomb payload. British Torpex
Torpex
Torpex is a secondary explosive 50% more powerful than TNT by mass. Torpex is composed of 42% RDX, 40% TNT and 18% powdered aluminium. It was used in the Second World War from late 1942. The name is short for Torpedo Explosive', having been originally developed for use in torpedoes...
, 50% more powerful than TNT, was the explosive used.

A relatively remote location in Norfolk
Norfolk
Norfolk is a low-lying county in the East of England. It has borders with Lincolnshire to the west, Cambridgeshire to the west and southwest and Suffolk to the south. Its northern and eastern boundaries are the North Sea coast and to the north-west the county is bordered by The Wash. The county...
, RAF Fersfield
RAF Fersfield
RAF Fersfield is a former World War II airfield located southwest of Norwich, Norfolk.Built in 1943/1944, the airfield was originally a satellite of RAF Knettishall. It was constructed to Class-A bomber specifications, with a main runway , and two secondary runways of...
was the launch site. Initially RAF Woodbridge
RAF Woodbridge
Royal Air Force Station Woodbridge, more commonly referred to as RAF Woodbridge, is a former Royal Air Force military airbase situated to the east of Woodbridge in the county of Suffolk, England...
had been selected for its long runway, but the possibility of the damaged aircraft that diverted to Woodbridge for landings colliding with a loaded drone caused concerns. The remote control system was insufficient for safe takeoff
Takeoff
Takeoff is the phase of flight in which an aerospace vehicle goes from the ground to flying in the air.For horizontal takeoff aircraft this usually involves starting with a transition from moving along the ground on a runway. For balloons, helicopters and some specialized fixed-wing aircraft , no...
and each drone was taken aloft by a volunteer pilot and a volunteer flight engineer to an altitude of 2,000 ft (600 m) for transfer of control to the CQ-17 operators. After successful turnover of control of the drone, the two-man crew would arm the payload and parachute out of the cockpit
Cockpit
A cockpit or flight deck is the area, usually near the front of an aircraft, from which a pilot controls the aircraft. Most modern cockpits are enclosed, except on some small aircraft, and cockpits on large airliners are also physically separated from the cabin...
. The 'mothership' would then direct the missile to the target.

When the training program was complete, the 562nd Squadron had ten drones and four 'motherships'.


On January 27, 1945 Spaatz sent an urgent message to Doolittle "Aphrodite babies must not be launched against the enemy until further orders".

The only drone that hit the target did not explode, supplying the Germans with an intact B-17 and a set of radio controls. Only one drone had done any damage. The failure of the program was attributed to the lack of suitable implementations of available technology.
The source of this article is wikipedia, the free encyclopedia.  The text of this article is licensed under the GFDL.