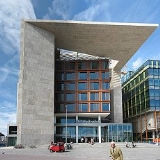 Encyclopedia
The Openbare Bibliotheek Amsterdam (Public Library Amsterdam) is a collective name for all public libraries
Public library
A public library is a library that is accessible by the public and is generally funded from public sources and operated by civil servants. There are five fundamental characteristics shared by public libraries...
in Amsterdam
Amsterdam
Amsterdam is the largest city and the capital of the Netherlands. The current position of Amsterdam as capital city of the Kingdom of the Netherlands is governed by the constitution of August 24, 1815 and its successors. Amsterdam has a population of 783,364 within city limits, an urban population...
, Netherlands
Netherlands
The Netherlands is a constituent country of the Kingdom of the Netherlands, located mainly in North-West Europe and with several islands in the Caribbean. Mainland Netherlands borders the North Sea to the north and west, Belgium to the south, and Germany to the east, and shares maritime borders...
. The first library opened in 1919 at the Keizersgracht. As of 2007, there are 28 public libraries and 43 lending points, such as in hospitals. In 2005, OBA had 1.7 million books and 165,000 members and lent out 5 million books.

The largest of these libraries, the Centrale Bibliotheek, moved to the Prinsengracht in 1977 and 30 years later, on 7 July 2007 (070707), to the Oosterdokseiland
Oosterdokseiland
Oosterdokseiland is a neighborhood of Amsterdam, Netherlands....
, just east of Amsterdam Centraal
Amsterdam Centraal
' is the central station of Amsterdam. It is one of the main railway hubs of the Netherlands and is used by 250,000 passengers a day, excluding transferring passengers. It is also the starting point of Amsterdam Metro lines 51, 53, and 54. The station building of Amsterdam Centraal was designed by...
station. It is the largest public library in Europe. The complex has a floor surface of 28,500 m2, spread out over 10 floors, 1200 seats, of which 600 with Internet-connected computers and a staff of 200. Also included are an auditorium, an exhibition room, the Library Museum, the Gerard Reve
Gerard Reve
Gerard Kornelis van het Reve was a Dutch writer. He adopted a shortened version of his name, Gerard Reve in 1973, and that is how he is known today. Together with Willem Frederik Hermans and Harry Mulisch, he is considered one of the "Great Three" of Dutch post-war literature...
Museum and 2000 parking spaces for bicycles. On the seventh floor is a V&D La Place self-service restaurant with a south-facing terrace. The cost of the project was €
Euro
The euro is the official currency of the eurozone: 17 of the 27 member states of the European Union. It is also the currency used by the Institutions of the European Union. The eurozone consists of Austria, Belgium, Cyprus, Estonia, Finland, France, Germany, Greece, Ireland, Italy, Luxembourg,...
80 million. The building was designed by Jo Coenen
Jo Coenen
Jo Coenen is a Dutch architect and urban planner. He studied architecture at the Eindhoven University of Technology , and later held professorships at TU Karlsruhe, Eindhoven University of Technology and Delft University of Technology.Between 2000 and 2004 Coenen was Chief Government Architect of...
, the former state architect (Rijksbouwmeester) of the Netherlands, who also designed the nearby KNSM island
KNSM Island
The KNSM Island is a man-made peninsula in the Eastern Docklands of Amsterdam. It is named for the Koninklijke Nederlandse Stoomboot-Maatschappij , the Royal Dutch Steamboat Shipping company which used to have its headquarters and its docks on the island...
, as well as the Central Library of Maastricht
Maastricht
Maastricht is situated on both sides of the Meuse river in the south-eastern part of the Netherlands, on the Belgian border and near the German border...
, and renovated the distinctive Glaspaleis
Glaspaleis
The Glaspaleis is a modernist building in Heerlen, Netherlands, built in 1935. Formerly a fashion house and department store, Schunck, it is now the cultural centre of the city...
in Heerlen
Heerlen
Heerlen is a city and a municipality in the southeastern Netherlands. The municipality is the second largest in the province of Limburg. It forms part of Parkstad Limburg, , an agglomeration of about 220,000 inhabitants.After its early Roman beginnings and a rather modest medieval period, Heerlen...
, which houses its Central Library.

The Central Library is open 7 days per week from 10 a.m. to 10 p.m. and the lending and returning of books is fully automated.