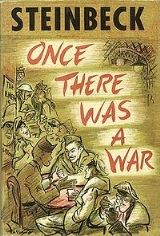 Once There Was A War
Topic Home
Discussion
0 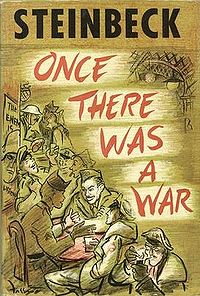 Steinbeck's articles include descriptions of life on a troop transporter
Troopship
A troopship is a ship used to carry soldiers, either in peacetime or wartime...
, an account of the liberation of a small Sicilian town, a description of how homesick US soldiers tried to grow their native vegetables in the English garden
English garden
The English garden, also called English landscape park , is a style of Landscape garden which emerged in England in the early 18th century, and spread across Europe, replacing the more formal, symmetrical Garden à la française of the 17th century as the principal gardening style of Europe. The...
s where they billeted, and an account of how a detachment of US paratroopers tricked the German garrison at Ventotene
Ventotene
Ventotene, in Roman times known as Pandataria or Pandateria from the Greek Pandoteira, is one of the Pontine Islands in the Tyrrhenian Sea, off the coast of Gaeta right at the border between Lazio and Campania, Italy...
into surrendering.

Steinbeck did not report 'straight news', as he put it: he did not cover battles, or interview national or military leaders. As befitted the author of The Grapes of Wrath
The Grapes of Wrath
The Grapes of Wrath is a novel published in 1939 and written by John Steinbeck, who was awarded the Pulitzer Prize in 1940 and the Nobel Prize for Literature in 1962....
, Steinbeck wrote about the experiences of the ordinary people, those who were doing the actual fighting, and those who did the vast number of unglamorous but vital support jobs which kept the armed forces operating.

In his Introduction, Steinbeck confesses that he felt 'a visitor' to the war, and was uncomfortable knowing that he could go home at any time, while the serving personnel could not. For this reason, he said, 'I never admitted to seeing anything myself, but always put my story in the mouth of another.' How much of his reporting is therefore of the 'eyewitness' class cannot be determined. For example, his descriptions of American and British torpedo boats in action against German forces seem like first-hand accounts, yet he nowhere refers to himself as present, despite his inclusion of convincing dialogue and detail. However, in his Travels With Charley, Steinbeck mentions wearing a naval officer's cap, 'Given me by a British torpedo boat captain, a very gentle gentleman and a murderer,' which phrase suggests that Steinbeck may well have observed action at first hand.
The source of this article is wikipedia, the free encyclopedia.  The text of this article is licensed under the GFDL.