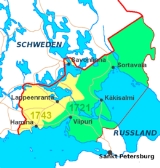 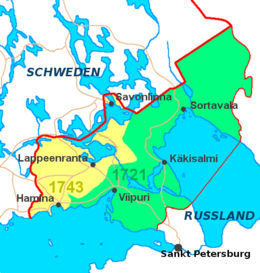 Old Finland is a name used for the areas that Russia gained from Sweden
Sweden
Sweden , officially the Kingdom of Sweden , is a Nordic country on the Scandinavian Peninsula in Northern Europe. Sweden borders with Norway and Finland and is connected to Denmark by a bridge-tunnel across the Öresund....
in the Great Northern War
Great Northern War
The Great Northern War was a conflict in which a coalition led by the Tsardom of Russia successfully contested the supremacy of the Swedish Empire in northern Central Europe and Eastern Europe. The initial leaders of the anti-Swedish alliance were Peter I the Great of Russia, Frederick IV of...
and in the Russo-Swedish War (1741–1743). Old Finland was joined to the autonomous Grand Duchy of Finland
Grand Duchy of Finland
The Grand Duchy of Finland was the predecessor state of modern Finland. It existed 1809–1917 as part of the Russian Empire and was ruled by the Russian czar as Grand Prince.- History :...
as Viipuri province
Viipuri Province
The Viipuri Province was a province of independent Finland from 1917 to 1947 but had already been founded in 1743.-History:The province was established in 1743 by separating the city of Viipuri and territories ceded from the Swedish Empire to Russia by the Treaty of Nystad in 1721, from the Saint...
in 1812.


The area corresponded largely with that of the medieval province subjugated to the Viipuri castle.

The Russian ruler guaranteed religion
Lutheranism
Lutheranism is a major branch of Western Christianity that identifies with the theology of Martin Luther, a German reformer. Luther's efforts to reform the theology and practice of the church launched the Protestant Reformation...
, properties, old Swedish laws and privileges of the inhabitants of these territories. However, a circumvention occurred, as Russian administrators and military were unfamiliar with Swedish system, and were used to a different system with its enslaved peasants, the serfdom
Serfdom
Serfdom is the status of peasants under feudalism, specifically relating to Manorialism. It was a condition of bondage or modified slavery which developed primarily during the High Middle Ages in Europe and lasted to the mid-19th century...
. As a result, the economy of the area was markedly different compared to that on the other side of the border.

The ruler's guarantee froze the situation, thus legal developments in Sweden were not introduced to these areas: the Viipuri and Käkisalmi territory did not adopt the 1734 General Law of Sweden (though Hamina
Hamina
Hamina is a town and a municipality of Finland. It is located in the province of Southern Finland and is part of the Kymenlaakso region. The town has a population of and covers an area of ofwhich is water. The population density is...
(Fredrikshamn), Lappeenranta
Lappeenranta
Lappeenranta is a city and municipality that resides on the shore of the lake Saimaa in South-Eastern Finland, about from the Russian border. It belongs to the region of South Karelia. With approximately inhabitants Lappeenranta is the largest city in Finland...
(Villmanstrand) and Savonlinna
Savonlinna
Savonlinna is a town and a municipality of inhabitants in the southeast of Finland, in the heart of the Saimaa lake region. The Finnish name of the town means "Castle of Savonia" and the Swedish name means "Newcastle".- History :...
(Nyslott), at the time still Swedish, of course did), and the new constitution of Gustav III
Gustav III of Sweden
Gustav III was King of Sweden from 1771 until his death. He was the eldest son of King Adolph Frederick and Queen Louise Ulrica of Sweden, she a sister of Frederick the Great of Prussia....
was out of question in the entire area.

The territories enjoyed a sort of autonomy and much particularism
Political particularism
Political particularism is the ability of policymakers to further their careers by appealing to narrow interests rather than the wider interests of the country...
, since the Russian rulers applied similar principles here as in Baltic Provinces
Baltic provinces
The Baltic governorates , originally the Ostsee governorates is a collective name for the administrative units of the Russian Empire set up at the territories of Swedish Estonia, Swedish Livonia and, afterwards, of Duchy of Courland and Semigallia .-History:The Treaty of Vilnius of 1561 included...
. The administration resembled a German principality
Principality
A principality is a monarchical feudatory or sovereign state, ruled or reigned over by a monarch with the title of prince or princess, or by a monarch with another title within the generic use of the term prince....
, rather than a Russian province
Guberniya
A guberniya was a major administrative subdivision of the Russian Empire usually translated as government, governorate, or province. Such administrative division was preserved for sometime upon the collapse of the empire in 1917. A guberniya was ruled by a governor , a word borrowed from Latin ,...
.

Under Russian rule the combined territories formed the Vyborg Governorate
Administrative divisions of Russia in 1744-1764
-Major events:*1744—Vyborg Governorate was formed on the recently acquired parts of Finland; also included portions of St. Petersburg Governorate....
, or Government of Vyborg.

Ecclesiastically, the areas were administered as a diocese, but without a bishop
Bishop
A bishop is an ordained or consecrated member of the Christian clergy who is generally entrusted with a position of authority and oversight. Within the Catholic Church, Eastern Orthodox, Oriental Orthodox Churches, in the Assyrian Church of the East, in the Independent Catholic Churches, and in the...
. The church building in Viipuri and another in Hamina were assigned as cathedral
Cathedral
A cathedral is a Christian church that contains the seat of a bishop...
s, with a diocesan chapter ("consistory"), led by the archdean
Archdean
Archdean is a discontinued Catholic ecclesiastical officeEven in the 20th century it was maintained as a dignity among the canons of a cathedral chapters, occasionally alongside a dean .* Not to be confused with Archdeacon...
.

The area was not forced to contribute men to the Russian Army until 1797. However there were many non-Finnish troops in the area, especially after the 1788-90 war.

Scandinavian-style district courts continued in judicial function, each with a judge and laymen members. However the Russian estate owners and military often ignored their decisions and imposed illegal punishments on the peasants.

Because of the apathy dominating the area not many figures from the area have a place in history. Two of them are Maximilian von Alopeus
Maximilian von Alopeus
Baron Maximilian von Alopaeus a Russian diplomat, born at Vyborg in Finland, and educated at Turku, afterwards at Göttingen, was intended for the ecclesiastical profession, but his employment as secretary by Count Nikita Ivanovich Panin, Russian ambassador at the Swedish court, was the first step...
and his brother David Alopaeus
David Alopaeus
Count Frans David Alopaeus was an Imperial Russian diplomat. He followed his older brother Maximilian von Alopaeus into a diplomatic career. He was enrolled at the Military Academy in Stuttgart from 1781 to 1785. He studied at the Georg-August-Universität in Göttingen...
, born in a Finnish family in Viipuri and both later serving many posts in Imperial administration, including ambassador in some Central European countries.

These areas were later referred to as Old Finland and from the beginning of the year 1812 they were incorporated in the Grand Duchy of Finland
Grand Duchy of Finland
The Grand Duchy of Finland was the predecessor state of modern Finland. It existed 1809–1917 as part of the Russian Empire and was ruled by the Russian czar as Grand Prince.- History :...
. Basically, the population in these provinces came to the same legal system as the Grand Duchy, including its Constitution and General Law, although some privileges took time to adapt, and so-called donated estates
Manorialism
Manorialism, an essential element of feudal society, was the organizing principle of rural economy that originated in the villa system of the Late Roman Empire, was widely practiced in medieval western and parts of central Europe, and was slowly replaced by the advent of a money-based market...
(owned by Russian noblemen
Russian nobility
The Russian nobility arose in the 14th century and essentially governed Russia until the October Revolution of 1917.The Russian word for nobility, Dvoryanstvo , derives from the Russian word dvor , meaning the Court of a prince or duke and later, of the tsar. A nobleman is called dvoryanin...
) in Karelia were a headache that was resolved slowly by monetary compensations from the Grand Duchy's Treasury. This was a long lasting burden, as the last was not until the 1870s.