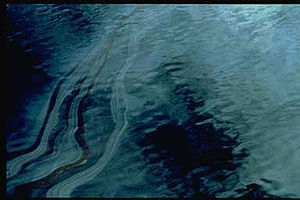 The law stated that companies must have a "plan to prevent spills that may occur" and have a "detailed containment and cleanup plan" for oil spills. The law also includes a clause that prohibits any vessel that, after March 22, 1989, has caused an oil spill of more than one million U.S. gallons (3,800 m³) in any marine area, from operating in Prince William Sound
Prince William Sound
Prince William Sound is a sound off the Gulf of Alaska on the south coast of the U.S. state of Alaska. It is located on the east side of the Kenai Peninsula. Its largest port is Valdez, at the southern terminus of the Trans-Alaska Pipeline System...
.

The bill was introduced to the House by Walter B. Jones, Sr.
Walter B. Jones, Sr.
Walter Beaman Jones, Sr. , was an American politician from the state of North Carolina who served in the United States House of Representatives, and was the father of Walter Beaman Jones, Jr., who is currently a Representative for the Republican Party.Jones was born in Fayetteville, North Carolina,...
, a Democratic congressman
Democratic Party (United States)
The Democratic Party is one of two major contemporary political parties in the United States, along with the Republican Party. The party's socially liberal and progressive platform is largely considered center-left in the U.S. political spectrum. The party has the lengthiest record of continuous...
from North Carolina's 1st congressional district
North Carolina's 1st congressional district
North Carolina's 1st congressional district is located mostly in the northeastern part of the state. This area is located on North Carolina's Coastal plain and contains towns such as Roanoke Rapids, Rocky Mount, Goldsboro, and New Bern....
, along with 79 cosponsors following the 1989 Exxon Valdez oil spill
Exxon Valdez oil spill
The Exxon Valdez oil spill occurred in Prince William Sound, Alaska, on March 24, 1989, when the Exxon Valdez, an oil tanker bound for Long Beach, California, struck Prince William Sound's Bligh Reef and spilled of crude oil. It is considered to be one of the most devastating human-caused...
, which at the time was the largest oil spill in U.S. history. It enjoyed widespread support, passing the House 375-5 and the Senate by voice vote
Voice vote
A voice vote is a voting method used by deliberative assemblies in which a vote is taken on a topic or motion by responding verbally....
before conference
United States Congress Conference committee
A conference committee is a committee of the Congress appointed by the House of Representatives and Senate to resolve disagreements on a particular bill...
, and unanimously in both chambers after conference. The U.S. Constitution, as interpreted in Gibbons v. Ogden
Gibbons v. Ogden
Gibbons v. Ogden, 22 U.S. 1 , was a landmark decision in which the Supreme Court of the United States held that the power to regulate interstate commerce was granted to Congress by the Commerce Clause of the United States Constitution. The case was argued by some of America's most admired and...
(1824), gives Congress the sole authority to regulate navigable waters.

In April 1998, Exxon argued in a legal action against the federal government that the Exxon Valdez should be allowed back into Alaskan waters. Exxon claimed the OPA was effectively a bill of attainder
Bill of attainder
A bill of attainder is an act of a legislature declaring a person or group of persons guilty of some crime and punishing them without benefit of a judicial trial.-English law:...
, a regulation that was unfairly directed at Exxon alone. In 2002, the 9th Circuit Court of Appeals ruled against Exxon. As of 2002, OPA had prevented 18 ships from entering Prince William Sound.