Observation Post Alpha, OP Alpha or Point Alpha (50°43′26.15"N 09°55′54.68"E) was a Cold War
Cold War
The Cold War was the continuing state from roughly 1946 to 1991 of political conflict, military tension, proxy wars, and economic competition between the Communist World—primarily the Soviet Union and its satellite states and allies—and the powers of the Western world, primarily the United States...
observation post between Rasdorf
Rasdorf
-Geography:Rasdorf is situated within the "Kuppenrhön" area, next to the border of Hesse and Thuringia.-Administration:The districts of Rasdorf, Setzelbach and Grüsselbach form the municipality of Rasdorf.-Sights:...
, Hesse
Hesse
Hesse or Hessia is both a cultural region of Germany and the name of an individual German state.* The cultural region of Hesse includes both the State of Hesse and the area known as Rhenish Hesse in the neighbouring Rhineland-Palatinate state...
, West Germany
West Germany
West Germany is the common English, but not official, name for the Federal Republic of Germany or FRG in the period between its creation in May 1949 to German reunification on 3 October 1990....
and Geisa
Geisa
Geisa is a town in the Wartburgkreis district, in Thuringia, Germany. It is situated in the Rhön Mountains, 26 km northeast of Fulda.The near border with Hesse was the border between West Germany and the GDR during the Cold War...
, Thuringia
Thuringia
The Free State of Thuringia is a state of Germany, located in the central part of the country.It has an area of and 2.29 million inhabitants, making it the sixth smallest by area and the fifth smallest by population of Germany's sixteen states....
, East Germany
German Democratic Republic
The German Democratic Republic , informally called East Germany by West Germany and other countries, was a socialist state established in 1949 in the Soviet zone of occupied Germany, including East Berlin of the Allied-occupied capital city...
. The post overlooked the Fulda Gap
Fulda Gap
The Fulda Gap is a region of lower elevation between the former East German border and Frankfurt am Main, Germany. Named for the town of Fulda, the Fulda Gap was strategically important during the Cold War...
, which would have been a prime invasion route had the Cold War erupted into actual warfare. The "Point Alpha" memorial commemorates its forty-year existence, and was dedicated to keep it and a section of East German wall as reminders of German division and the confrontation of NATO and the Warsaw Pact
Warsaw Pact
The Warsaw Treaty Organization of Friendship, Cooperation, and Mutual Assistance , or more commonly referred to as the Warsaw Pact, was a mutual defense treaty subscribed to by eight communist states in Eastern Europe...
in the Cold War. 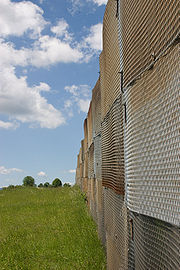 Observation Post Alpha was one of four US observation posts along the Hessian German domestic border. Today, "Point Alpha" is the name of a museum on the road between Geisa (Thuringia) and Rasdorf village (Hesse). OP Alpha fulfilled NATO defence reconnaissance with its view of Geisa, then the western-most city of the Eastern Bloc; the Warsaw Pact had counterpart observation posts on their side of the Iron Curtain.

The OP overlooked the Fulda Gap from atop a 411-meter hill, lying in the centre of the NATO defence line — from where NATO expected a Warsaw Pact invasion. The name OP Alpha dates to its being the first such point; geography also allowed monitoring Communist radio traffic. At the first sign of an invasion the OP Alpha crew would have withdrawn, as the actual planned battlefields to meet a Warsaw Pact invasion lay a couple of kilometers to the west.

Following reunification, the post was supposed to be removed along with the other remaining observation posts at the German border. However, a citizens initiative was formed to prevent its destruction. By the end of 1994, the camp was used as an accommodation for asylum-seekers and in 1995 it was placed under historical protection. That same year the border museum association Rhön Point Alpha was created and began the construction of the today's memorial with the support of the Thuringian state government.

The museum complex covers not only the NATO observation post on the Hessian side, but also a strip of the original border protection systems of East Germany, including a visitor's center on Thuringia side.