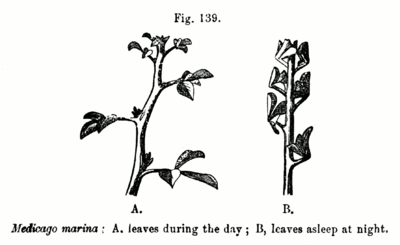 Nyctinasty is the circadian rhythmic nastic movement of higher plants in response to the onset of darkness. Examples are the closing of the petal
Petal
Petals are modified leaves that surround the reproductive parts of flowers. They often are brightly colored or unusually shaped to attract pollinators. Together, all of the petals of a flower are called a corolla. Petals are usually accompanied by another set of special leaves called sepals lying...
s of a flower at dusk and the sleep movements of the leaves of many legumes.

Nyctinastic movements are associated with diurnal light and temperature changes and controlled by the circadian clock and the light receptor phytochrome
Phytochrome
Phytochrome is a photoreceptor, a pigment that plants use to detect light. It is sensitive to light in the red and far-red region of the visible spectrum. Many flowering plants use it to regulate the time of flowering based on the length of day and night and to set circadian rhythms...
. Several leaf-opening and leaf-closing factors have been characterized biochemically.

Anatomically, the movements are mediated by pulvini
Pulvinus
A pulvinus is a joint-like thickening at the base of a plant leaf or leaflet that facilitates growth-independent movement. It consists of a core of vascular tissue within a flexible, bulky cylinder of thin-walled parenchyma cells...
. In the SLEEPLESS mutation of Lotus japonicus
Lotus japonicus
Lotus japonicus is a wild legume that belongs to family Fabaceae. Members of this family are very diverse, constituting about 20,000 species. They are of significant agricultural and biological importance as many of the legume species are rich sources of protein and oil and can also fix atmospheric...
, the pulvini are changed into petiole
Petiole (botany)
In botany, the petiole is the stalk attaching the leaf blade to the stem. The petiole usually has the same internal structure as the stem. Outgrowths appearing on each side of the petiole are called stipules. Leaves lacking a petiole are called sessile, or clasping when they partly surround the...
-like structures, rendering the plant incapable of closing its leaflets at night.
The source of this article is wikipedia, the free encyclopedia.  The text of this article is licensed under the GFDL.