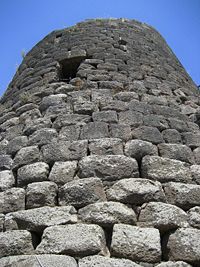 The nuraghe nuˈraɡe is the main type of ancient megalith
Megalith
A megalith is a large stone that has been used to construct a structure or monument, either alone or together with other stones. Megalithic describes structures made of such large stones, utilizing an interlocking system without the use of mortar or cement.The word 'megalith' comes from the Ancient...
ic edifice found in Sardinia
Sardinia
Sardinia is the second-largest island in the Mediterranean Sea . It is an autonomous region of Italy, and the nearest land masses are the French island of Corsica, the Italian Peninsula, Sicily, Tunisia and the Spanish Balearic Islands.The name Sardinia is from the pre-Roman noun *sard[],...
. Today it has come to be the symbol of Sardinia and its distinctive culture, the Nuragic civilization
Nuragic civilization
The Nuragic civilization was a civilization of Sardinia, lasting from the Bronze Age to the 2nd century AD. The name derives from its most characteristic monuments, the nuraghe. They consist of tower-fortresses, built starting from about 1800 BC...
. According to the Oxford English Dictionary
Oxford English Dictionary
The Oxford English Dictionary , published by the Oxford University Press, is the self-styled premier dictionary of the English language. Two fully bound print editions of the OED have been published under its current name, in 1928 and 1989. The first edition was published in twelve volumes , and...
the etymology is "uncertain and disputed": "The word is perhaps related to the Sardinian place names Nurra, Nurri, Nurru, and to Sardinian nurra heap of stones, cavity in earth (although these senses are difficult to reconcile). A connection with the Semitic base of Arabic nūr light, fire ... is now generally rejected." The latin word "murus" (wall) may be related to it (M. Pittau, philologist), as the old Italian word "mora" (tombal rock mound), as used by Dante in his "Comedy". The derivation: murus-muraghe-nuraghe is debated.

The typical nuraghe is situated in areas where previous Prehistoric Sardinians Cultures had been distributed, that is not far from alluvial plains (though few nuraghi appear in plains nowadays, as they were destroyed by human activities such as agriculture, dams and others) and has the shape of a truncated conical tower resembling a medieval tower (outside) or a beehive
Beehive tomb
A beehive tomb, also known as a tholos tomb , is a burial structure characterized by its false dome created by the superposition of successively smaller rings of mudbricks or, more often, stones...
(inside). The structure's walls consist of three components: an outer layer (tilted inwards and made of many layers of stones whose size diminishes with height) shaped like a tower, an inner layer, made of smaller stones (to form a bullet shaped dome called "Tholos"), an intermediate layer of very small pieces and dirt, which makes the whole construction very sturdy: it stands only by virtue of the weight of its stones, which may each amount to several tons. Some nuraghes are about 20 metres (60 ft) in height. A spiral stone stair was built within the thick walls, leading to upper floors (if present) and/or to a terrace.

Today, there are little less than 7,000 nuraghes still extant in Sardinia, although their number was somewhat larger, originally. Nuraghes are most prevalent in the northwest and south-central parts of the island.

There is a similar type of structure which has a corridor or a system of corridors. Some authors consider them somewhat older than the typical nuraghe and probably serving different purposes.

The nuraghes were built between the middle of the Bronze Age
Bronze Age
The Bronze Age is a period characterized by the use of copper and its alloy bronze as the chief hard materials in the manufacture of some implements and weapons. Chronologically, it stands between the Stone Age and Iron Age...
(18th-15th centuries BC) and the Late Bronze Age. This clearly rules out any possible cultural correlation with later towers such as Scottish Brochs and Israelian El Awhat. The only similar buildings related to nuraghi seem to be Corse Towers.

According to Massimo Pallottino, a scholar of Sardinian prehistory and an Etruscologist, the architecture produced by the Nuragic civilization
Nuragic civilization
The Nuragic civilization was a civilization of Sardinia, lasting from the Bronze Age to the 2nd century AD. The name derives from its most characteristic monuments, the nuraghe. They consist of tower-fortresses, built starting from about 1800 BC...
was the most advanced of any civilization in the western Mediterranean during this epoch, including those in the regions of Magna Graecia
Magna Graecia
Magna Græcia is the name of the coastal areas of Southern Italy on the Tarentine Gulf that were extensively colonized by Greek settlers; particularly the Achaean colonies of Tarentum, Crotone, and Sybaris, but also, more loosely, the cities of Cumae and Neapolis to the north...
. Of the 7,000 extant nuraghes, only a few have been scientifically excavated. Undoubtedly, many Nuragic Cultural traits and values were inherited by the Etruscans and by the Romans.
There is no consensus on the function of the nuraghes: they could have been religious temples, ordinary dwellings, rulers' residences, military strongholds, meeting halls, or a combination of the former. Some of the nuraghes are, however, located in strategic locations – such as hills – from which important passages could be easily controlled. They might have been something between a "status symbol" and a "passive defence" building, meant to be a deterrent for possible enemies.

Nuraghes could also have been the "national" symbol of the Nuragic peoples. Small-scale models of nuraghe have often been excavated at religious sites (e.g. in the "maze" temple at the Su Romanzesu site near Bitti in central Sardinia). Nuraghes may have just connoted wealth or power, or they may have been an indication that a site had its owners. Recent unconfirmed theories tend to suggest that Sardinian towns were independent entities (such as the city-state
City-state
A city-state is an independent or autonomous entity whose territory consists of a city which is not administered as a part of another local government.-Historical city-states:...
s, although in a geographical sense they were not cities) that formed federations and that the building of these monuments might have depended on agreed-on distributions of territory among federated unities.

The most important complex is Su Nuraxi di Barumini
Su Nuraxi di Barumini
Su Nuraxi is a nuragic archaeological site in Barumini, Sardinia, Italy. It was inscribed on the UNESCO list of World Heritage Sites in 1997 as Su Nuraxi di Barumini.Su Nuraxi simply means "the nuraghe" in Sardinian....
, which was inscribed on the UNESCO
UNESCO
The United Nations Educational, Scientific and Cultural Organization is a specialized agency of the United Nations...
World Heritage Site
World Heritage Site
A UNESCO World Heritage Site is a place that is listed by the UNESCO as of special cultural or physical significance...
list.
The highest and most imposing one is the Nuraghe Sant' Antine near the village of Torralba
Torralba, Italy
Torralba is a town and comune in Sardinia, Italy, administratively part of the province of Sassari.The communal territory is home to the Nuraghe palace of Nuraghe Santu Antine, the highest and best preserved in Sardinia....
.
Other famous nuraghes are near Alghero
Alghero
Alghero , is a town of about 44,000 inhabitants in Italy. It lies in the province of Sassari in northwestern Sardinia, next to the sea.-History:The area of today's Alghero has been settled since pre-historic times...
, Macomer
Macomer
Macomer is a town and comune of Sardinia in the province of Nuoro. It is situated on the southern ascent to the central plateau of this part of Sardinia, at the junction of narrow-gauge lines branching from the main railroad line running east to Nuoro and west to Bosa.The district, especially...
, Abbasanta
Abbasanta
Abbasanta is a town and comune in the province of Oristano, Sardinia , and is located on the main road between Macomer and Oristano.-Description:Abbasanta sits on a lava plateau rich in cork oaks, olive trees and lentischi...
(see Losa
Losa
The nuraghe Losa is a complex prehistoric building in the shape of a tholos tomb. Its central structure has a triangular shape.On the west side, a turreted wall is linked to it...
), Orroli
Orroli
Orroli is a comune in the Province of Cagliari in the Italian region of Sardinia, located about 50 km north of Cagliari. As of 31 December 2004, it had a population of 2,647 and an area of 75.6 km²....
, and Villanovaforru
Villanovaforru
Villanovaforru is a comune in the Province of Medio Campidano in the Italian region Sardinia, located about 50 km northwest of Cagliari and about 8 km northwest of Sanluri. As of 31 December 2004, it had a population of 709 and an area of 11.0 km².Villanovaforru borders the...
.