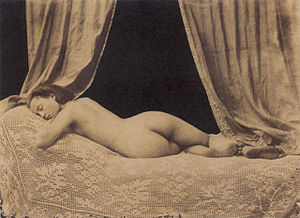 Many photographers consider an art nude
Art nude
An art nude is a work of art that takes the naked human form as its dominant subject. The term is used for painting, sculpture, photography, and mixed media.-Western tradition:...
photograph to be a one that studies the human body, rather than the person. A photograph of a person that is meant to be recognized is called a portrait
Portrait
thumb|250px|right|Portrait of [[Thomas Jefferson]] by [[Rembrandt Peale]], 1805. [[New-York Historical Society]].A portrait is a painting, photograph, sculpture, or other artistic representation of a person, in which the face and its expression is predominant. The intent is to display the likeness,...
, and nude photographs often do not show a face at all. Nude photography is generally not a snapshot, but a composed image of a person in a still position. As an art form, nude photography is a stylized depiction of the nude body with the line and form of the human figure as the primary objective. Photographers sometimes use extremes of light and shadow, oiled skin, and shadows falling across the body to show texture and structure of the body.

Early photographers often depicted the nudity of women like the one we see here by Félix-Jacques Moulin
Félix-Jacques Moulin
Félix-Jacques Antoine Moulin was a French photographer.In 1849, Moulin opened a photographer's shop at 31 bis rue du Faubourg Montmartre and started producing daguerreotypes of young girls aged 14 to 16...
. Many, like Edward Weston
Edward Weston
Edward Henry Weston was a 20th century American photographer. He has been called "one of the most innovative and influential American photographers…" and "one of the masters of 20th century photography." Over the course of his forty-year career Weston photographed an increasingly expansive set of...
, Ruth Bernhard
Ruth Bernhard
Ruth Bernhard was an American photographer.-Early life:Bernhard was born in Berlin and studied at the Berlin Academy of Art from 1925–27. Bernhard's father, Lucian Bernhard, was known for his poster and typeface design.-Photography career:In 1927 Bernhard moved to New York City, where her...
and Jerry Avenaim
Jerry Avenaim
Jerry Avenaim is an American photographer best known for his fashion and celebrity images.-Early life:...
, preferred to depict the lines of a body as a piece of art. They imported from the terminology of painting the terms art nude
Art nude
An art nude is a work of art that takes the naked human form as its dominant subject. The term is used for painting, sculpture, photography, and mixed media.-Western tradition:...
and figurenude to avoid suggestions that their works were erotica
Erotica
Erotica are works of art, including literature, photography, film, sculpture and painting, that deal substantively with erotically stimulating or sexually arousing descriptions...
or pornography
Pornography
Pornography or porn is the explicit portrayal of sexual subject matter for the purposes of sexual arousal and erotic satisfaction.Pornography may use any of a variety of media, ranging from books, magazines, postcards, photos, sculpture, drawing, painting, animation, sound recording, film, video,...
. Robert Mapplethorpe
Robert Mapplethorpe
Robert Mapplethorpe was an American photographer, known for his large-scale, highly stylized black and white portraits, photos of flowers and nude men...
helped pioneer the later works that deliberately blurred the boundaries between erotic and artistic nude photography.