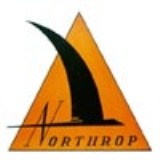 Northrop Corporation was a leading United States aircraft
Aircraft
An aircraft is a vehicle that is able to fly by gaining support from the air, or, in general, the atmosphere of a planet. An aircraft counters the force of gravity by using either static lift or by using the dynamic lift of an airfoil, or in a few cases the downward thrust from jet engines.Although...
manufacturer from its formation in 1939 until its merger with Grumman to form Northrop Grumman
Northrop Grumman
Northrop Grumman Corporation is an American global aerospace and defense technology company formed by the 1994 purchase of Grumman by Northrop. The company was the fourth-largest defense contractor in the world as of 2010, and the largest builder of naval vessels. Northrop Grumman employs over...
in 1994. The company is known for its development of the flying wing
Flying wing
A flying wing is a tailless fixed-wing aircraft which has no definite fuselage, with most of the crew, payload and equipment being housed inside the main wing structure....
design, although only a few of these have entered service.

Jack Northrop founded three companies using his name. The first was the Avion Corporation in 1927, which was absorbed in 1929 by the United Aircraft and Transport Corporation
United Aircraft and Transport Corporation
The United Aircraft and Transport Corporation was formed in 1929, when William Boeing of the Boeing firms teamed up with Frederick Rentschler of Pratt & Whitney to form a large, amalgamated firm, uniting business interests in all aspects of aviation—a combination of aircraft engine and airframe...
as a subsidiary named "Northrop Aviation Corporation". The parent company moved its operations to Kansas
Kansas
Kansas is a US state located in the Midwestern United States. It is named after the Kansas River which flows through it, which in turn was named after the Kansa Native American tribe, which inhabited the area. The tribe's name is often said to mean "people of the wind" or "people of the south...
in 1931, and so Jack, along with Donald Douglas
Donald Wills Douglas, Sr.
Donald Wills Douglas, Sr. was a United States aircraft industrialist and founder of the Douglas Aircraft Company in 1921 .-Early life:...
, established a "Northrop Corporation" located in El Segundo, California
El Segundo, California
El Segundo is a city in Los Angeles County, California, United States. Located on the Santa Monica Bay, it was incorporated on January 18, 1917, and is one of the Beach Cities of Los Angeles County and part of the South Bay Cities Council of Governments...
, which produced several successful designs, including the Northrop Gamma
Northrop Gamma
-See also:-References:NotesBibliography* Eden, Paul and Soph Moeng. The Complete Encyclopedia of World Aircraft. London: Amber Books Ltd., 2002. ISBN 0-7607-3432-1....
and Northrop Delta
Northrop Delta
The Northrop Delta was an American single-engined passenger transport aircraft of the 1930s. Closely related to Northrop's Gamma mail plane, 13 were produced by the Northrop Corporation, followed by 19 aircraft built under license by Canadian Vickers Limited....
. However, labor difficulties led to the dissolution of the corporation by Douglas in 1937, and the plant became the El Segundo Division of Douglas Aircraft.

Northrop still sought his own company, and so in 1939 established the "Northrop Corporation" in nearby Hawthorne, California
Hawthorne, California
Hawthorne is a city in southwestern Los Angeles County, California. The city at the 2010 census had a population of 84,293, up from 84,112 at the 2000 census.-Geography:...
, a site located by co-founder Moye Stephens. The corporation lasted until 1994. It was there that the P-61 night fighter
Night fighter
A night fighter is a fighter aircraft adapted for use at night or in other times of bad visibility...
, the Flying Wing
Flying wing
A flying wing is a tailless fixed-wing aircraft which has no definite fuselage, with most of the crew, payload and equipment being housed inside the main wing structure....
s (B-35
Northrop YB-35
The Northrop XB-35 and YB-35 were experimental heavy bomber aircraft developed for the United States Army Air Forces during and shortly after World War II by the Northrop Corporation. It used the radical and potentially very efficient flying wing design, in which the tail section and fuselage are...
and YB-49), the F-89
F-89 Scorpion
The Northrop F-89 Scorpion was an early American jet-powered fighter designed from the outset as an all-weather interceptor. Though its straight wings limited its performance, it was among the first USAF jet fighters with guided missiles, and notably the first combat aircraft armed with air-to-air...
interceptor
Interceptor aircraft
An interceptor aircraft is a type of fighter aircraft designed specifically to prevent missions of enemy aircraft, particularly bombers and reconnaissance aircraft. Interceptors generally rely on high speed and powerful armament in order to complete their mission as quickly as possible and set up...
, the Snark
SM-62 Snark
-External links:** Air Force Magazine article about a Snark that was test-fired and rumored to have been found in Brazil** detailed article on Snark and the USAF school to train personnel for it...
intercontinental cruise missile
Cruise missile
A cruise missile is a guided missile that carries an explosive payload and is propelled, usually by a jet engine, towards a land-based or sea-based target. Cruise missiles are designed to deliver a large warhead over long distances with high accuracy...
and the F-5 Freedom Fighter jet fighter (and its derivative, the successful T-38
T-38 Talon
The Northrop T-38 Talon is a twin-engine supersonic jet trainer. It was the world's first supersonic trainer and is also the most produced. The T-38 remains in service as of 2011 in air forces throughout the world....
trainer) were developed and built.

The F-5 was so successful that Northrop spent much of the 1970s and 1980s attempting to duplicate its success with similar light-weight designs. Their first attempt to improve the F-5 was the N-300, which featured much more powerful engines and moved the wing to a higher position to allow for increased ordnance that the higher power allowed. The N-300 was further developed into the P-530 with even larger engines, this time featuring a small amount of "bypass" (turbofan
Turbofan
The turbofan is a type of airbreathing jet engine that is widely used for aircraft propulsion. A turbofan combines two types of engines, the turbo portion which is a conventional gas turbine engine, and the fan, a propeller-like ducted fan...
) to improve cooling and allow the engine bay to be lighter, as well as much more wing surface. The P-530 also included radar and other systems considered must-haves on modern aircraft. When the Light Weight Fighter
Light Weight Fighter
The Lightweight Fighter program was a U.S. Air Force technology evaluation program initiated in the 1960s by a cabal of officers and defense analysts known as the "Fighter Mafia"...
program was announced, the P-530 was stripped of much of its equipment to become the P-600, and eventually the YF-17 Cobra
YF-17 Cobra
The Northrop YF-17 was a prototype lightweight fighter aircraft designed for the United States Air Force's Lightweight Fighter technology evaluation program. The LWF was initiated because many in the fighter community believed that aircraft like the F-15 Eagle were too large and expensive for...
, which lost the competition to the F-16 Fighting Falcon
F-16 Fighting Falcon
The General Dynamics F-16 Fighting Falcon is a multirole jet fighter aircraft originally developed by General Dynamics for the United States Air Force . Designed as an air superiority day fighter, it evolved into a successful all-weather multirole aircraft. Over 4,400 aircraft have been built since...
.

Nevertheless the YF-17 Cobra was modified with help from McDonnell Douglas
McDonnell Douglas
McDonnell Douglas was a major American aerospace manufacturer and defense contractor, producing a number of famous commercial and military aircraft. It formed from a merger of McDonnell Aircraft and Douglas Aircraft in 1967. McDonnell Douglas was based at Lambert-St. Louis International Airport...
to become the F/A-18 Hornet
F/A-18 Hornet
The McDonnell Douglas F/A-18 Hornet is a supersonic, all-weather carrier-capable multirole fighter jet, designed to dogfight and attack ground targets . Designed by McDonnell Douglas and Northrop, the F/A-18 was derived from the latter's YF-17 in the 1970s for use by the United States Navy and...
in order to fill a similar light-weight design competition for the US Navy. Northrop intended to sell a de-navalized version as the F-18L, but the basic F-18A continued to outsell it, leading to a long and fruitless lawsuit between the two companies. Northrop continued to build much of the F-18 fuselage and other systems after this period, but also returned to the original F-5 design with yet another new engine to produce the F-20 Tigershark
F-20 Tigershark
The Northrop F-20 Tigershark was a privately-financed light fighter, designed and built by Northrop. Its development began in 1975 as a further evolution of Northrop's F-5E Tiger II, featuring a new engine that greatly improved overall performance, and a modern avionics suite including a powerful...
as a low-cost aircraft. This garnered little interest in the market, and the project was dropped.

Based on the experimentation with flying wing
Flying wing
A flying wing is a tailless fixed-wing aircraft which has no definite fuselage, with most of the crew, payload and equipment being housed inside the main wing structure....
s the company developed the B-2
B-2 Spirit
The Northrop Grumman B-2 Spirit is an American heavy bomber with low observable stealth technology designed to penetrate dense anti-aircraft defenses and deploy both conventional and nuclear weapons. The bomber has a crew of two and can drop up to eighty -class JDAM GPS-guided bombs, or sixteen ...
stealth bomber of the 1990s.

In 1994, partly due to the loss of the Advanced Tactical Fighter
Advanced Tactical Fighter
The Advanced Tactical Fighter was a demonstration and validation program undertaken by the United States Air Force to develop a next-generation air superiority fighter to counter emerging worldwide threats, including Soviet Sukhoi Su-27 and Mikoyan MiG-29 fighters under development in the 1980s...
contract to Lockheed Martin
Lockheed Martin
Lockheed Martin is an American global aerospace, defense, security, and advanced technology company with worldwide interests. It was formed by the merger of Lockheed Corporation with Martin Marietta in March 1995. It is headquartered in Bethesda, Maryland, in the Washington Metropolitan Area....
and the removal of their proposal from consideration for the Joint Strike Fighter competition
Joint Strike Fighter Program
Joint Strike Fighter is a development and acquisition program intended to replace a wide range of existing fighter, strike, and ground attack aircraft for the United States, the United Kingdom, Canada, and their allies. After a competition between the Boeing X-32 and the Lockheed Martin X-35, a...
, the company bought Grumman to form Northrop Grumman
Northrop Grumman
Northrop Grumman Corporation is an American global aerospace and defense technology company formed by the 1994 purchase of Grumman by Northrop. The company was the fourth-largest defense contractor in the world as of 2010, and the largest builder of naval vessels. Northrop Grumman employs over...
.