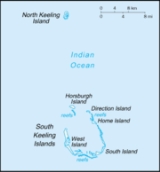 Encyclopedia
North Keeling is a small, uninhabited coral atoll of about 1.2 km2, about 25 km north of Horsburgh Island
Horsburgh Island
Horsburgh Island is one of the Cocos Islands. Its area is 1,04 square kilometers. There is a small lagoon in the interior of the island to the northeast.-History:...
. It is the northernmost atoll and island of the Australia
Australia
Australia , officially the Commonwealth of Australia, is a country in the Southern Hemisphere comprising the mainland of the Australian continent, the island of Tasmania, and numerous smaller islands in the Indian and Pacific Oceans. It is the world's sixth-largest country by total area...
n territory of the Cocos (Keeling) Islands
Cocos (Keeling) Islands
The Territory of the Cocos Islands, also called Cocos Islands and Keeling Islands, is a territory of Australia, located in the Indian Ocean, southwest of Christmas Island and approximately midway between Australia and Sri Lanka....
. North Keeling Island and the surrounding sea to 1.5 km from shore form the Pulu Keeling National Park. 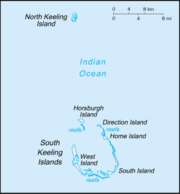 North Keeling comprises just one C-shaped island, a nearly closed atoll ring with a small opening into the lagoon, about 50 m (165 ft) wide, on the east side. The lagoon is about 0.5 km2 (124 acres). The island is home to the only surviving population of the endemic, and endangered, Cocos Buff-banded Rail
Cocos Buff-banded Rail
The Cocos Buff-banded Rail, Gallirallus philippensis andrewsi, is an endangered subspecies of the Buff-banded Rail endemic to the Cocos Islands, an Australian Offshore Territory in the central-eastern Indian Ocean...
as well as large breeding colonies of seabird
Seabird
Seabirds are birds that have adapted to life within the marine environment. While seabirds vary greatly in lifestyle, behaviour and physiology, they often exhibit striking convergent evolution, as the same environmental problems and feeding niches have resulted in similar adaptations...
s.

The Cocos (Keeling) Islands are believed to have first been seen by Europeans in 1609 by Captain William Keeling
William Keeling
Captain William Keeling , of the East India Company, was a British sea captain. He commanded the Susanna on the second East India Company voyage in 1604, and he commanded the Red Dragon on the third voyage of 1607. He discovered the Cocos Islands in 1609 as he was going home from Java to England....
, after whom they are named, of the East India Company on a journey from Java
Java
Java is an island of Indonesia. With a population of 135 million , it is the world's most populous island, and one of the most densely populated regions in the world. It is home to 60% of Indonesia's population. The Indonesian capital city, Jakarta, is in west Java...
in the Dutch East Indies
Dutch East Indies
The Dutch East Indies was a Dutch colony that became modern Indonesia following World War II. It was formed from the nationalised colonies of the Dutch East India Company, which came under the administration of the Netherlands government in 1800....
. North Keeling was sketched by Ekeberg, a Swedish captain, in 1749, showing the presence of Coconut Palm
Coconut
The coconut palm, Cocos nucifera, is a member of the family Arecaceae . It is the only accepted species in the genus Cocos. The term coconut can refer to the entire coconut palm, the seed, or the fruit, which is not a botanical nut. The spelling cocoanut is an old-fashioned form of the word...
s. It also appears on a 1789 chart produced by British hydrographer Alexander Dalrymple
Alexander Dalrymple
Alexander Dalrymple was a Scottish geographer and the first Hydrographer of the British Admiralty. He was the main proponent of the theory that there existed a vast undiscovered continent in the South Pacific, Terra Australis Incognita...
.

North Keeling was visited in 1836 by Captain Robert FitzRoy
Robert FitzRoy
Vice-Admiral Robert FitzRoy RN achieved lasting fame as the captain of HMS Beagle during Charles Darwin's famous voyage, and as a pioneering meteorologist who made accurate weather forecasting a reality...
and his companion Charles Darwin
Charles Darwin
Charles Robert Darwin FRS was an English naturalist. He established that all species of life have descended over time from common ancestry, and proposed the scientific theory that this branching pattern of evolution resulted from a process that he called natural selection.He published his theory...
in HMS Beagle
HMS Beagle
HMS Beagle was a Cherokee-class 10-gun brig-sloop of the Royal Navy. She was launched on 11 May 1820 from the Woolwich Dockyard on the River Thames, at a cost of £7,803. In July of that year she took part in a fleet review celebrating the coronation of King George IV of the United Kingdom in which...
, who were, as with many other visitors, unable to land on the island.

In the 19th century many people suffering from Beriberi
Beriberi
Beriberi is a nervous system ailment caused by a thiamine deficiency in the diet. Thiamine is involved in the breakdown of energy molecules such as glucose and is also found on the membranes of neurons...
were put ashore at the island. Several graves are present, some from these people, but also from shipwreck
Shipwreck
A shipwreck is what remains of a ship that has wrecked, either sunk or beached. Whatever the cause, a sunken ship or a wrecked ship is a physical example of the event: this explains why the two concepts are often overlapping in English....
s and German sailors from the Emden.

On 9 November 1914, the captain of the German light cruiser
Light cruiser
A light cruiser is a type of small- or medium-sized warship. The term is a shortening of the phrase "light armored cruiser", describing a small ship that carried armor in the same way as an armored cruiser: a protective belt and deck...
SMS Emden, Karl von Müller
Karl von Müller
Karl Friedrich Max von Müller was Captain of the famous German commerce raider, the light cruiser SMS Emden during World War I.- Early life and career :The son of a cracking Colonel, he was born in Hanover...
, beached his ship on North Keeling after sustaining severe damage from the Australian light cruiser HMAS Sydney
HMAS Sydney (1912)
HMAS Sydney was a Chatham class light cruiser of the Royal Australian Navy . Laid down in 1911 and launched in 1912, the cruiser was commissioned into the RAN in 1913....
. Soon afterwards he surrendered, though some of his crew hid out on the island for a while; their skeletons were later found and buried. Part of the wreck is still present at North Keeling, though submerged. In 1950 Japanese contractors removed all the useful remaining metal from the wreck.

Between the first and second world wars groups of about 20 Cocos Malays
Cocos Malays
Cocos Malays are a community that form the predominant group of the Cocos Islands, which is now part of Australia. The Cocos Malays are originated from the descendants of Malay settlers from the British colonies of British Malaya, Singapore, Brunei and the Riau Archipelago of Dutch East Indies.The...
were stationed on the island for up to a fortnight at a time to harvest timber, coconuts and birds to take back to Home Island
Home Island
Home Island, also known locally as Pulu Selma, is one of only two permanently inhabited islands of the 26 islands of the Southern Atoll of the Cocos Islands, an Australian Overseas Territory in the central-eastern Indian Ocean...
. In the 1970s and 1980s the acquisition of more efficient boats and firearm
Firearm
A firearm is a weapon that launches one, or many, projectile at high velocity through confined burning of a propellant. This subsonic burning process is technically known as deflagration, as opposed to supersonic combustion known as a detonation. In older firearms, the propellant was typically...
s led to an increase in seabird hunting and concern about its impact on the seabird breeding colonies.

In 1986 an agreement was reached between the Australian National Parks and Wildlife Service and the Cocos Malay people to restrict and sustainably manage any further hunting on North Keeling. In 1989 Cyclone John devastated the Red-footed Booby
Red-footed Booby
The Red-footed Booby, Sula sula, is a large seabird of the booby family, Sulidae. As suggested by the name, adults always have red feet, but the colour of the plumage varies. They are powerful and agile fliers, but they are clumsy in takeoffs and landings...
colony on North Keeling and legal hunting ceased to allow the population to recover. Since then no legal hunting has taken place.

The Pulu Keeling National Park was established on 12 December 1995. It is important as a breeding island for seabird
Seabird
Seabirds are birds that have adapted to life within the marine environment. While seabirds vary greatly in lifestyle, behaviour and physiology, they often exhibit striking convergent evolution, as the same environmental problems and feeding niches have resulted in similar adaptations...
s and marine turtle
Turtle
Turtles are reptiles of the order Testudines , characterised by a special bony or cartilaginous shell developed from their ribs that acts as a shield...
s. It is home to the endemic Cocos Buff-banded Rail
Cocos Buff-banded Rail
The Cocos Buff-banded Rail, Gallirallus philippensis andrewsi, is an endangered subspecies of the Buff-banded Rail endemic to the Cocos Islands, an Australian Offshore Territory in the central-eastern Indian Ocean...
, Gallirallus philippensis andrewsi and to the Cocos Angelfish
Centropyge
Centropyge is a genus of marine angelfishes. The genus is the largest within the Pomacanthid family, comprising over 30 described species. Species in this group do not exceed 15 cm in length and live in haremic structures with one dominant male and multiple females...
. It is listed as a wetland
Wetland
A wetland is an area of land whose soil is saturated with water either permanently or seasonally. Wetlands are categorised by their characteristic vegetation, which is adapted to these unique soil conditions....
of international importance under the Ramsar Convention
Ramsar Convention
The Ramsar Convention is an international treaty for the conservation and sustainable utilization of wetlands, i.e., to stem the progressive encroachment on and loss of wetlands now and in the future, recognizing the fundamental ecological functions of wetlands and their economic, cultural,...
on 17 March 1996, as Ramsar Site 797.

The Park was declared for the following purposes: