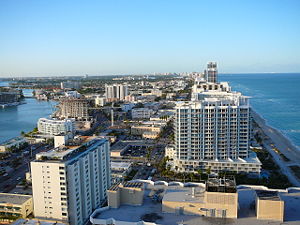 North Beach is a section of the city of Miami Beach
Miami Beach, Florida
Miami Beach is a coastal resort city in Miami-Dade County, Florida, United States, incorporated on March 26, 1915. The municipality is located on a barrier island between the Atlantic Ocean and Biscayne Bay, the latter which separates the Beach from Miami city proper...
, Florida
Florida
Florida is a state in the southeastern United States, located on the nation's Atlantic and Gulf coasts. It is bordered to the west by the Gulf of Mexico, to the north by Alabama and Georgia and to the east by the Atlantic Ocean. With a population of 18,801,310 as measured by the 2010 census, it...
, United States
United States
The United States of America is a federal constitutional republic comprising fifty states and a federal district...
. It is the northernmost section of the city, roughly border by 63rd Street and Indian Creek Drive to the south and 87th Terrace to the north. It collectively refers to neighborhoods including Isles of Normandy, Biscayne Point, and La Gorce.