Encyclopedia
The North American Company was a holding company
Holding company
A holding company is a company or firm that owns other companies' outstanding stock. It usually refers to a company which does not produce goods or services itself; rather, its purpose is to own shares of other companies. Holding companies allow the reduction of risk for the owners and can allow...
incorporated in New Jersey
New Jersey
New Jersey is a state in the Northeastern and Middle Atlantic regions of the United States. , its population was 8,791,894. It is bordered on the north and east by the state of New York, on the southeast and south by the Atlantic Ocean, on the west by Pennsylvania and on the southwest by Delaware...
on June 14, 1890, and controlled by Henry Villard
Henry Villard
Henry Villard was an American journalist and financier who was an early president of the Northern Pacific Railway....
, to succeed to the assets and property of the Oregon and Transcontinental Company
Oregon and Transcontinental Company
The Oregon and Transcontinental Company was a 19th-century holding company in the United States, organized by Henry Villard in 1881 to control the Northern Pacific Railroad and Oregon Railway and Navigation Company. In 1890, it became the North American Company, which was incorporated in New Jersey...
. It owned public utilities and public transport
Public transport
Public transport is a shared passenger transportation service which is available for use by the general public, as distinct from modes such as taxicab, car pooling or hired buses which are not shared by strangers without private arrangement.Public transport modes include buses, trolleybuses, trams...
companies and was broken up in 1946, largely to comply with the Public Utility Holding Company Act of 1935
Public Utility Holding Company Act of 1935
The Public Utility Holding Company Act of 1935 , , also known as the Wheeler-Rayburn Act, was a law that was passed by the United States Congress to facilitate regulation of electric utilities, by either limiting their operations to a single state, and thus subjecting them to effective state...
.

Its headquarters were at 60 Broadway
Broadway (New York City)
Broadway is a prominent avenue in New York City, United States, which runs through the full length of the borough of Manhattan and continues northward through the Bronx borough before terminating in Westchester County, New York. It is the oldest north–south main thoroughfare in the city, dating to...
in Manhattan
Manhattan
Manhattan is the oldest and the most densely populated of the five boroughs of New York City. Located primarily on the island of Manhattan at the mouth of the Hudson River, the boundaries of the borough are identical to those of New York County, an original county of the state of New York...
.

By 1940, North American was a US$2.3 billion holding company heading up a pyramid of by then 80 companies. It controlled ten major direct subsidiaries in eight of which it owned at least 79%. Three of the ten were major holding companies:

Four of the ten direct subsidiaries were operating companies:

The remaining three of the ten direct subsidiaries were:

At various times during its existence, North American also owned substantial interests in these other companies as well:


North American Company was broken up by the Securities and Exchange Commission, following the United States Supreme Court decision of April 1, 1946. 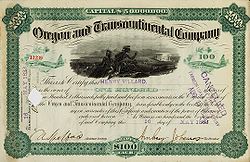