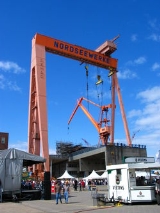 Encyclopedia
Nordseewerke is a shipbuilding
Shipbuilding
Shipbuilding is the construction of ships and floating vessels. It normally takes place in a specialized facility known as a shipyard. Shipbuilders, also called shipwrights, follow a specialized occupation that traces its roots to before recorded history.Shipbuilding and ship repairs, both...
company located in Emden
Emden
Emden is a city and seaport in the northwest of Germany, on the river Ems. It is the main city of the region of East Frisia; in 2006, the city had a total population of 51,692.-History:...
, Germany
Germany
Germany , officially the Federal Republic of Germany , is a federal parliamentary republic in Europe. The country consists of 16 states while the capital and largest city is Berlin. Germany covers an area of 357,021 km2 and has a largely temperate seasonal climate...
. The name Nordseewerke means "North Sea
North Sea
In the southwest, beyond the Straits of Dover, the North Sea becomes the English Channel connecting to the Atlantic Ocean. In the east, it connects to the Baltic Sea via the Skagerrak and Kattegat, narrow straits that separate Denmark from Norway and Sweden respectively...
shipyard" in German
German language
German is a West Germanic language, related to and classified alongside English and Dutch. With an estimated 90 – 98 million native speakers, German is one of the world's major languages and is the most widely-spoken first language in the European Union....
. The shipyard employs some 1,400 people and is the second-largest plant in Emden, following Volkswagen
Volkswagen
Volkswagen is a German automobile manufacturer and is the original and biggest-selling marque of the Volkswagen Group, which now also owns the Audi, Bentley, Bugatti, Lamborghini, SEAT, and Škoda marques and the truck manufacturer Scania.Volkswagen means "people's car" in German, where it is...
. It became ThyssenKrupp Marine Systems Nordseewerke
ThyssenKrupp Marine Systems
ThyssenKrupp Marine Systems of Germany is a group and holding company of providers of naval vessels, surface ships and submarines...
in 1991 and then Schaaf Industrie AG

Nordseewerke was founded on March 11, 1903 and is currently one of the oldest among the still-existing shipyards in Germany. The company built many ships for Kaiserliche Marine
Kaiserliche Marine
The Imperial German Navy was the German Navy created at the time of the formation of the German Empire. It existed between 1871 and 1919, growing out of the small Prussian Navy and Norddeutsche Bundesmarine, which primarily had the mission of coastal defense. Kaiser Wilhelm II greatly expanded...
during World War I
World War I
World War I , which was predominantly called the World War or the Great War from its occurrence until 1939, and the First World War or World War I thereafter, was a major war centred in Europe that began on 28 July 1914 and lasted until 11 November 1918...
and the Kriegsmarine
Kriegsmarine
The Kriegsmarine was the name of the German Navy during the Nazi regime . It superseded the Kaiserliche Marine of World War I and the post-war Reichsmarine. The Kriegsmarine was one of three official branches of the Wehrmacht, the unified armed forces of Nazi Germany.The Kriegsmarine grew rapidly...
during World War II
World War II
World War II, or the Second World War , was a global conflict lasting from 1939 to 1945, involving most of the world's nations—including all of the great powers—eventually forming two opposing military alliances: the Allies and the Axis...
as well as for the modern Deutsche Marine
German Navy
The German Navy is the navy of Germany and is part of the unified Bundeswehr .The German Navy traces its roots back to the Imperial Fleet of the revolutionary era of 1848 – 52 and more directly to the Prussian Navy, which later evolved into the Northern German Federal Navy...
.

The shipyard has also constructed ships for use by other navies, like the Kobben
Kobben class submarine
The Kobben class or Type 207 is a version of the German Type 205 submarine customized for use by the Royal Norwegian Navy.- History :...
(Type 207) and Ula
Ula class submarine
The Ula class is a Norwegian submarine type which was assembled in Germany in the late 1980s and early 1990s. The class, consisting of 6 vessels, is currently the only submarine type in service with the Royal Norwegian Navy.-History:...
(Klasse 210) class submarines for the Royal Norwegian Navy
Royal Norwegian Navy
The Royal Norwegian Navy is the branch of the Norwegian Defence Force responsible for naval operations. , the RNoN consists of approximately 3,700 personnel and 70 vessels, including 5 heavy frigates, 6 submarines, 14 patrol boats, 4 minesweepers, 4 minehunters, 1 mine detection vessel, 4 support...
, which were made to operate in shallow, coastal waters. In the past 20 years, submarines were also exported to South Africa
South Africa
The Republic of South Africa is a country in southern Africa. Located at the southern tip of Africa, it is divided into nine provinces, with of coastline on the Atlantic and Indian oceans...
, Argentina
Argentina
Argentina , officially the Argentine Republic , is the second largest country in South America by land area, after Brazil. It is constituted as a federation of 23 provinces and an autonomous city, Buenos Aires...
(TR-1700 submarine) and Israel
Israel
The State of Israel is a parliamentary republic located in the Middle East, along the eastern shore of the Mediterranean Sea...
.