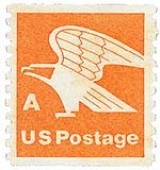 Encyclopedia
Non-denominated postage is postage intended to meet a certain postage rate that retains full validity for that intended postage rate even after the rate is increased. It does not show a monetary value, or denomination
Denomination (postage stamp)
:This article deals with the price of a postage stamp. For other meanings of the word 'denomination' see Denomination .In philately, the denomination is the "inscribed value of a stamp"...
, on the face. In many English speaking countries, it is called non-value indicator (NVI) postage. Invented to reduce the cost of printing large issues of low-value stamps to "top-up" old issues, NVI stamps are widely used, including in the United States and many European countries.

Non-denominated postage was first introduced in the United Kingdom in 1989 for domestic mail, in part as a workaround to the problem of fast-changing rates.

The British Post Office
Royal Mail
Royal Mail is the government-owned postal service in the United Kingdom. Royal Mail Holdings plc owns Royal Mail Group Limited, which in turn operates the brands Royal Mail and Parcelforce Worldwide...
has issued "non-value indicated" Machins
Machin series
The Machin series of postage stamps is the main definitive stamp series in the United Kingdom, used since 5 June 1967. It is the second series to figure the image of Elizabeth II, replacing the Wilding series....
using textual inscriptions "1ST" and "2ND" to indicate class of service rather than a numeric value. It has since introduced a number of variations including those for worldwide and European use, for different weights, and for postcards.

In past years, non-denominated postage issued by the United States
United States
The United States of America is a federal constitutional republic comprising fifty states and a federal district...
differed from the issues of other countries, in that the stamps retained their original monetary value. Some stamps, such as those intended for local or bulk mail
Bulk mail
Bulk mail broadly refers to mail that is mailed and processed in bulk at reduced rates. The term does not denote any particular purpose for the mail; but in general usage is synonymous with "junk mail."...
rate, were issued without denomination.

The United States also issued stamps with letter denomination, beginning from A, B, etc., during postal rate changes. After reaching the letter "H", this practice was discarded in favor of simply indicating the class of postage (e.g., first class) for which the stamp was intended.

In 2006, the US Postal Service applied for permission to issue a stamp similar to non-denominated stamps in the US, termed the "forever stamp", for first-class postage.

On March 26, 2007, the US Postal service unveiled the first such stamp, which went on sale April 12, 2007, for 41 cents
Cent (United States coin)
The United States one-cent coin, commonly known as a penny, is a unit of currency equaling one one-hundredth of a United States dollar. The cent's symbol is ¢. Its obverse has featured the profile of President Abraham Lincoln since 1909, the centennial of his birth. From 1959 to 2008, the reverse...
(US$0.41), the so-called "Liberty Bell" stamp, which is marked "USA FIRST-CLASS FOREVER". On October 21, 2010, the second Forever Stamp, featuring pinecones on evergreen trees, was issued for the Christmas season. Coils of Forever stamps were first issued on December 1, 2010 in the se-tenant format with Lady Liberty and the Flag design. The latest re-design, announced June 16th, 2011, features four American scientists: Melvin Calvin
Melvin Calvin
Melvin Ellis Calvin was an American chemist most famed for discovering the Calvin cycle along with Andrew Benson and James Bassham, for which he was awarded the 1961 Nobel Prize in Chemistry. He spent most of his five-decade career at the University of California, Berkeley.- Life :Calvin was born...
, chemist
Chemist
A chemist is a scientist trained in the study of chemistry. Chemists study the composition of matter and its properties such as density and acidity. Chemists carefully describe the properties they study in terms of quantities, with detail on the level of molecules and their component atoms...
; Asa Gray
Asa Gray
-References:*Asa Gray. Dictionary of American Biography. American Council of Learned Societies, 1928–1936.*Asa Gray. Encyclopedia of World Biography, 2nd ed. 17 Vols. Gale Research, 1998.*Asa Gray. Plant Sciences. 4 vols. Macmillan Reference USA, 2001....
, botanist; Maria Goeppert Mayer, physicist
Physicist
A physicist is a scientist who studies or practices physics. Physicists study a wide range of physical phenomena in many branches of physics spanning all length scales: from sub-atomic particles of which all ordinary matter is made to the behavior of the material Universe as a whole...
; and Severo Ochoa
Severo Ochoa
Severo Ochoa de Albornoz was a Spanish-American doctor and biochemist, and joint winner of the 1959 Nobel Prize in Physiology or Medicine with Arthur Kornberg.-Early life:...
, biochemist
Biochemist
Biochemists are scientists who are trained in biochemistry. Typical biochemists study chemical processes and chemical transformations in living organisms. The prefix of "bio" in "biochemist" can be understood as a fusion of "biological chemist."-Role:...
. These stamps are always sold at the current first-class postage rate. They are always valid for the full first-class postage regardless of any rate increases since the stamps' purchase (unused "forever" stamps purchased in April 2007 therefore are valid for the full 44 cent first-class postage rate, despite having been purchased for 41 cents).

Some fundraising (or semipostal) stamps have had this feature for years. For example, the breast cancer research stamp
Breast cancer research stamp
The Breast Cancer Research Stamp is a semi-postal non-denominated postage stamp issued by the United States Postal Service, priced in 2010 as eleven cents higher than the standard first-class letter rate...
was issued in 1998. Currently it is worth US$0.44.

The United States Post Office announced on December 16, 2010, that beginning with the Lunar New Year
Chinese New Year
Chinese New Year – often called Chinese Lunar New Year although it actually is lunisolar – is the most important of the traditional Chinese holidays. It is an all East and South-East-Asia celebration...
, Year of the Rabbit, stamp to be issued January 22, 2011; thereafter, all first-class mail 1-ounce rate stamps will be issued as forever stamps.

Customers can use Forever Stamps for international
mail, but since all international prices are higher than
domestic prices, customers will need to attach additional
postage. The value of the Forever Stamp is the
domestic First-Class Mail letter price in effect on the
day of use.

Canada's NVI is called the "Permanent" stamp, which is a trademarked term. It was originally marked by a white capital "P" overlaid on a red maple leaf, which is itself within a white circle. Later releases, such as the 2009 Silver Dart
AEA Silver Dart
-References:NotesBibliography* Aerial Experimental Association . Aerofiles. . Retrieved: 19 May 2005.* Green, H. Gordon. The Silver Dart: The Authentic Story of the Hon. J.A.D. McCurdy, Canada's First Pilot. Fredericton, New Brunswick: Atlantic Advocate Book, 1959.* Milberry, Larry. Aviation in...
commemorative, varied the colours. In that example, the Maple Leaf around the "P" is white and the "P" is dropped out. The circle does not appear.

In announcing its decision to adopt non-denominated postage in 2006, Canada Post
Canada Post
Canada Post Corporation, known more simply as Canada Post , is the Canadian crown corporation which functions as the country's primary postal operator...
noted that it had to print more than 60 million one-cent stamps following the last price increase in 2005. The Canadian and American NVI programs are essentially equivalent, as both cover regular domestic first-class mail. One Canada Post NVI stamp covers the cost of mailing a standard letter up to 30 g within Canada, while the United States Postal Service's NVI stamp covers mailing up to 1 oz (28 g) within the United States.

Finland's first NVI stamp (ikimerkki) was issued on 2.3.1992. There are two denominations, one valid for domestic 1st class, or overnight, domestic letter of up to 50 g and the other for similar 2nd class letter. The stamps may be combined for more expensive tariffs.


Regular first class stamps can also be used to mail letters abroad, providing that their combined value corresponds to the appropriate tariff by Swedish Post. For instance, to mail a letter up to 20 g in weight, two Brev stamps are required.