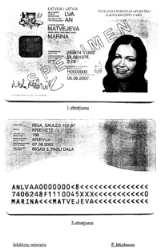 Encyclopedia
Non-citizens in Latvia
Latvia
Latvia , officially the Republic of Latvia , is a country in the Baltic region of Northern Europe. It is bordered to the north by Estonia , to the south by Lithuania , to the east by the Russian Federation , to the southeast by Belarus and shares maritime borders to the west with Sweden...
n law are individuals who are not citizens of Latvia or any other country but, who, in accordance with the Latvian law "Regarding the status of citizens of the former USSR who possess neither Latvian nor other citizenship", have the right to a non-citizen passport issued by the Latvian government as well as other specific rights. These are "citizens of the former USSR (..) who reside in the Republic of Latvia as well as who are in temporary absence and their children who simultaneously comply with the following conditions: 1) on 1 July 1992 they were registered in the territory of Latvia regardless of the status of the living space indicated in the registration of residence, or up to 1 July 1992 their last registered place of residence was in the Republic of Latvia, or it has been determined by a court judgment that they have resided in the territory of Latvia for 10 consecutive years until the referred to date; 2) they are not citizens of Latvia; and 3) they are not and have not been citizens of another state." Children born after Latvia reestablished independence (August 21, 1991) to parents who are both non-citizens are entitled to citizenship upon request of the parents.

While the issue of non-citizens is often equated to the problem of statelessness, other sources consider that the status of non-citizen in both Latvia and Estonia is unique and has not existed previously in international law.

The referendum held in October 1998 eliminated the "windows" system, which limited the age groups allowed to naturalize each year. It also gave the right to children of non-citizens born in Latvia after August 21, 1991 to be registered as citizens without naturalisation barring imprisonment or other citizenship. Parents can request citizenship for their children until age 15, after which a child can make the request on their own behalf from age 15 to 17.

According to the Constitutional Court of Latvia, 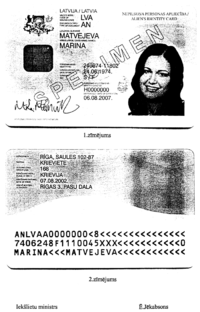 The Latvian parliament created the category of non-citizen in 1991 when it affirmed legal continuity with Latvia's original citizenship laws. Individuals who were citizens of Latvia as of 17 June 1940, prior to Soviet occupation, were once again recognized as citizens, along with their descendants. Individuals migrating to Latvia after that date who were permanent residents and had completed universal primary or secondary education in a Latvian language school were also eligible for citizenship, along with their children up to age 15. That effectively limited non-citizen status to largely Russophones arriving during the Soviet era.
Notably this included some of those that had elected the parliament in question.

To deal with the issue of former Soviet citizens without Latvian citizenship, the law On the Status of those Former USSR. Citizens who do not have the Citizenship of Latvia or that of any Other State was adopted in 1995 as a temporary measure pending the resolution of changing citizenship regimes in the now independent former Soviet republics.

The issue of non-citizens has been equated to the problem of statelessness. Non-citizens have been described as stateless by the OSCE Parliamentary Assembly and by Amnesty International. Non-citizens are named as an example of problems of statelessness by Commissioner for Human Rights, although conceding that non-citizens may not prefer citizenship for their children, and the UN
United Nations
The United Nations is an international organization whose stated aims are facilitating cooperation in international law, international security, economic development, social progress, human rights, and achievement of world peace...
Special Rapporteur on contemporary forms of racism, racial discrimination, xenophobia and related intolerance recommends Latvia "revisit the existing requirements for naturalization with the objective of facilitating the granting of citizenship to non-citizens, implementing the commitments established by the 1961 Convention on the Reduction of Statelessness." Latvian Ombudsman R. Apsītis considers the "specific legal status" of non-citizens to be questionable from the viewpoint of international law.

By definition in Latvian law, non-citizens are not stateless. While they have rights akin to citizens, for example, the right to reside in Latvia without visas or temporary residence permits, rights in other areas are curtailed. Non-citizens cannot vote, although they can participate to a lesser degree in public policy through NGOs. Pension rights are limited, and non-citizens cannot hold certain positions in local and national government, the civil service, and other governmental entities. Non-citizens are exempt from military service, which was compulsory for male Latvian citizens until 2006. UN Committee on the Elimination of Racial Discrimination described non-citizens' position as discriminatory in 1999.

With regard to international law, non-citizens are not considered stateless
Stateless
- Society :* Anarchy* Stateless communism, which Karl Marx predicted would follow capitalism and socialism* Stateless nation, a group of people without a nation-state* Stateless society, a society that is not governed by a state...
by the EU Network of Independent Experts on Fundamental Rights, which notes:

... in Latvia, non-citizens under the 1995 Law on Status of citizens of the former USSR who are not citizens of Latvia or any other country are neither citizens, nor foreigners, nor stateless persons. A great proportion of the large Russian speaking population of the country falls within this category, unknown in public international law. The same applies to non-citizens in Estonia.

The rights of Latvian non-citizens outside of Latvia are governed strictly by treaty. For example, non-citizens now travel visa-free in the EU
European Union
The European Union is an economic and political union of 27 independent member states which are located primarily in Europe. The EU traces its origins from the European Coal and Steel Community and the European Economic Community , formed by six countries in 1958...
under Schengen
Schengen Agreement
The Schengen Agreement is a treaty signed on 14 June 1985 near the town of Schengen in Luxembourg, between five of the ten member states of the European Economic Community. It was supplemented by the Convention implementing the Schengen Agreement 5 years later...
just as Latvian citizens do; both have access to Latvian consular services abroad. (Russian citizens do not enjoy this privilege.) Outside the EU, numerous countries allow visa-free travel for Latvian citizens but not for non-citizens.

Peter Van Elsuwege, a scholar in European law at Ghent University
Ghent University
Ghent University is a Dutch-speaking public university located in Ghent, Belgium. It is one of the larger Flemish universities, consisting of 32,000 students and 7,100 staff members. The current rector is Paul Van Cauwenberge.It was established in 1817 by King William I of the Netherlands...
, states that the Latvian law is grounded upon the established legal principle that persons who settle under the rule of an occupying power gain no automatic right to nationality. A number of historic precedents support this, according to Van Elsuwege, most notably the case of Alsace-Lorraine
Alsace-Lorraine
The Imperial Territory of Alsace-Lorraine was a territory created by the German Empire in 1871 after it annexed most of Alsace and the Moselle region of Lorraine following its victory in the Franco-Prussian War. The Alsatian part lay in the Rhine Valley on the west bank of the Rhine River and east...
when the French on recovering the territory in 1918 did not grant citizenship to German settlers despite Germany having annexed the territory 47 years earlier in 1871.

Non-citizens may naturalize provided that they have been permanent residents of Latvia for at least 5 years, demonstrate Latvian language competency, correctly answer questions regarding Latvia's Constitution and history—including that it was occupied by the Soviet Union (a question debated in Latvian Russian press) and know the words to the Latvian national anthem
Dievs, sveti Latviju!
Dievs, svētī Latviju! is the national anthem of Latvia. Words and music by Kārlis Baumanis .-Composition:...
. Former members of foreign military
Red Army
The Workers' and Peasants' Red Army started out as the Soviet Union's revolutionary communist combat groups during the Russian Civil War of 1918-1922. It grew into the national army of the Soviet Union. By the 1930s the Red Army was among the largest armies in history.The "Red Army" name refers to...
, people convicted of propagating fascist or communist ideas or inciting ethnic hatred, and individuals considered hostile to the Republic of Latvia cannot be granted citizenship. The government can refuse naturalisation to individuals who have fulfilled requirements if they are found to be disloyal (viz. Juris Petropavlovskis case, declared admissible by the European Court of Human Rights
European Court of Human Rights
The European Court of Human Rights in Strasbourg is a supra-national court established by the European Convention on Human Rights and hears complaints that a contracting state has violated the human rights enshrined in the Convention and its protocols. Complaints can be brought by individuals or...
and pending before it as of September 2010).

A survey conducted and published in 2003 by the Naturalization Board indicated that categories of non-citizen most likely to naturalize were: socially active, from 25 to 50 years, female, completed higher education, employees in local or national government, and anyone living in Riga and its environs. The factors cited as to why people have not pursued citizenship were: the opinion that people deserve citizenship automatically — 34.2%, hoping naturalization will be simplified — 26.2%, travel to the CIS is easier for non-citizens — 26.2%, concerns about passing the Latvian competency test — 23.5%, no particular need — 21.6%, concerns about passing the Latvian history test — 20.5%, cost of fees — 20.2%, not enough time — 18.1%, naturalization is demeaning — 17.9%. Less than 9% indicated a preference for citizenship other than Latvian.

The international community expresses slightly different views on the question. So, OSCE mission monitoring the 2006 parliamentary elections
Latvian parliamentary election, 2006
The most recent elections for the 9th Saeima, the parliament of Latvia, were held on October 7, 2006. There were lists of candidates from 19 political parties...
mentioned that

A resolution of the Parliamentary Assembly of the Council of Europe in November 2006 found:
International recommendations to Latvia, which concern non-citizenship, include:

The Russian Foreign Ministry regularly charges Latvia with serious violations of the rights of its Russophone population, describing non-citizens as "stateless";. In responding to charges of discrimination, Latvian authorities contend there is little practical difference between citizens and non-citizens, the primary ones being that non-citizens cannot vote and that non-citizens are exempt from military service.

The Russian Foreign Office has published a collection of international recommendations to Latvia concerning the minority rights, including those on the non-citizenship issue. Russia itself has allowed most Latvian non-citizens short trips without visas since June, 2008. This step was criticized by Latvian MFA, but welcomed by the Secretary-General of CoE T. Davis. Earlier, Latvian citizens were charged more for a Russian single-entry visa than non-citizens (more than five times the fee as of December 2007) seen by T. Malmlof as rewarding if not encouraging statelessness.

As reported by the European Commissioner for Human Rights 2007 report on Latvia, in 2006 there were 411,054 non-citizens, 66.5% of them belonging to Russian minority (per §30). While applications of children born after August 21, 1991 are reviewed under simplified procedure, "over 13 000 children are still non-citizens, and, children are still being born as non-citizens" (per §37,38). Commissioner has noted that "the exclusion of non-citizens from political life does nothing to encourage their integration" (§43). As reported, "the continued existence of the status of non-citizen" mostly held by representatives of national minorities is "deeply problematic in terms of real or perceived equality and social cohesion" (§29).

The Commissioner conceded that not all non-citizens may wish to gain citizenship status but did not explore this possibility further. His report also contained clarifications provided by the Latvian government in response, including:

The Commissioner attributed that there are still large numbers of non-citizens, particularly with regard to children, to "lack of commitment" on the part of Latvian authorities, whose response was that Latvia is materially committed to the rights of its minorities, and that from a practical standpoint there is little additional benefit and motivation to become a citizen versus remaining a non-citizen.