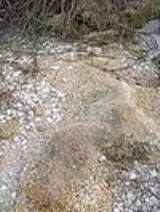 Encyclopedia
Nocoroco is the site of a Timucua
Timucua
The Timucua were a Native American people who lived in Northeast and North Central Florida and southeast Georgia. They were the largest indigenous group in that area and consisted of about 35 chiefdoms, many leading thousands of people. The various groups of Timucua spoke several dialects of the...
n village located on the Tomoka River
Tomoka River
The Tomoka River is a north-flowing river in Volusia County, Florida, United States. It drains an area of about and is the longest river in Volusia County , with a length of .- Geography :...
, in Tomoka State Park
Tomoka State Park
Tomoka State Park is an Florida State Park located along the Tomoka River, three miles north of Ormond Beach on North Beach Street.-Fauna:...
. The park is located two or three miles north of Ormond Beach, Florida
Ormond Beach, Florida
Ormond Beach is a city in Volusia County, Florida, United States. The population was 36,301 at the 2000 census. As of 2004, the population recorded by the U.S. Census Bureau is 37,929. Ormond Beach is the northern neighbor of Daytona Beach and is home to Tomoka State Park.-History:Ormond Beach was...
on North Beach Street.

Approximately seven thousand years ago, during the Archaic Period, indigenous people found plentiful fish and shellfish at this site in the shelter of a barrier island to the east. The site was inhabited approximately twelve hundred years ago by the Timucuans, whose descendants were discovered there by Europeans. Alvaro Mexia
Alvaro Mexia
Alvaro Mexia was a 17th century Spanish explorer and cartographer of the east coast of Florida. Mexia was stationed in St Augustine and was given a diplomatic mission to the native populations living south of St. Augustine and in the Cape Canaveral area...
visited Nocoroco in 1605, just as European acculturation had begun. Mexia's expedition explored down the east coast of Florida at the behest of the Spanish governor. This late St. Johns period site represents one of the last Timucuan strongholds in northeastern Florida. All that remains today of these native peoples are the shell midden
Midden
A midden, is an old dump for domestic waste which may consist of animal bone, human excrement, botanical material, vermin, shells, sherds, lithics , and other artifacts and ecofacts associated with past human occupation...
s, which help modern archaeologists document their lives.

The British occupation began in 1763 when Great Britain received Florida from Spain in a trade. The site of the village of Nocoroco was part of a British land-grant called Mt. Oswald, held by Richard Oswald. His plantation grew indigo and rice. After its return to the Spanish in 1783, the area was likely cultivated until many plantations were destroyed near the beginning of the Second Seminole War in 1835.

The midden at Nocoroco is mainly composed largely of a black earth accumulation, with pockets of shell and a few larger shell accumulations. The midden differs from most common middens in the region, which are mostly shell. Shell types include Ostrea Virginica, Venus Mercenaria, Tagelus Gibbus, Arca (sp.), Donax Varabilis, Modiolus Plicatulus, Busycon Perversum, and Murex Fulvescens. Animal bones were not preserved well and typically were quite fragmentary. Among mammals, the most prevalent source of food seems to have been deer, but other types of bones, such as fish, turtle and alligator remains, were all present.

Today the site of the village of Nocoroco is marked by a large fountain sculpture, called the "Tomokie Fountain", created by Frederick Dana Marsh
Frederick Dana Marsh
Frederick Dana Marsh was an American illustrator.Born in 1872 to a prosperous Chicago stockyard merchant, Marsh attended the School of the Art Institute of Chicago, where he worked with artists preparing murals for the Chicago World's Fair in 1893, learning the big brush techniques of mural...
. The fountain is Marsh's artistic interpretation of the legend of Tomokie, whose arrogance in drinking from a sacred spring was paid for with his life and those of all his band. According to information at the site, references to the legend date back more than one hundred years.
The source of this article is wikipedia, the free encyclopedia.  The text of this article is licensed under the GFDL.