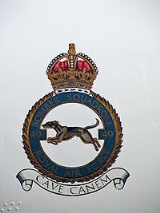 Encyclopedia
No. 49 Squadron was a bomber squadron of the Royal Air Force
Royal Air Force
The Royal Air Force is the aerial warfare service branch of the British Armed Forces. Formed on 1 April 1918, it is the oldest independent air force in the world...
from 1938 to 1965. They received their first Hampdens
Handley Page Hampden
The Handley Page HP.52 Hampden was a British twin-engine medium bomber of the Royal Air Force serving in the Second World War. With the Whitley and Wellington, the Hampden bore the brunt of the early bombing war over Europe, taking part in the first night raid on Berlin and the first 1,000-plane...
in September 1938.

They were a famous Hampden squadron; with the only Victoria Cross
Victoria Cross
The Victoria Cross is the highest military decoration awarded for valour "in the face of the enemy" to members of the armed forces of various Commonwealth countries, and previous British Empire territories....
awarded Rod Learoyd
Roderick Alastair Brook Learoyd
Wing Commander Roderick Alastair Brook Learoyd VC was an English recipient of the Victoria Cross, the highest and most prestigious award for gallantry in the face of the enemy that can be awarded to British and Commonwealth forces.-Details:Born in Folkestone in February 1913...
amongst the ones who served on the type.

They carried out the attack of the Dortmund-Ems Canal
Dortmund-Ems Canal
The Dortmund–Ems Canal is a 269 km long canal in Germany between the inland port of the city of Dortmund and the sea port of Emden. The artificial southern part of the canal ends after 215 km at the lock of Herbrum near Meppen. From there, the route goes over a length of 45 km over...
in 12 August 1940.

During their second tour of operation Avro Lincoln SX984 was lost in an accident.

They operated the Vickers Valiant
Vickers Valiant
The Vickers-Armstrongs Valiant was a British four-jet bomber, once part of the Royal Air Force's V bomber nuclear force in the 1950s and 1960s...
from RAF Wittering
RAF Wittering
RAF Wittering is a Royal Air Force station within the unitary authority area of Peterborough, Cambridgeshire. Although Stamford in Lincolnshire is the nearest town, the runways of RAF Wittering cross the boundary between Cambridgeshire and Northamptonshire....
and RAF Marham
RAF Marham
Royal Air Force Station Marham, more commonly known as RAF Marham, is a Royal Air Force station; a military airbase, near the village of Marham in the English county of Norfolk, East Anglia....
, from 1 May 1956 until 1 May 1965.

The sole remaining Vickers Valiant (XD818
United Kingdom military aircraft serials
In the United Kingdom to identify individual aircraft, all military aircraft are allocated and display a unique serial number. A unified serial number system, maintained by the Air Ministry , and its successor the Ministry of Defence , is used for aircraft operated by the Royal Air Force , Fleet...
) - the one that dropped the first British hydrogen bomb at Christmas Island
Kiritimati
Kiritimati or Christmas Island is a Pacific Ocean raised coral atoll in the northern Line Islands, and part of the Republic of Kiribati....
with 49 Sqn as part of Operation Grapple
Operation Grapple
Operation Grapple, and operations Grapple X, Grapple Y and Grapple Z, were the names of British nuclear tests of the hydrogen bomb. They were held 1956—1958 at Malden Island and Christmas Island in the central Pacific Ocean. Nine nuclear detonations took place during the trials, resulting in...
- is preserved at the RAF Museum Cosford, near Wolverhampton
Wolverhampton
Wolverhampton is a city and metropolitan borough in the West Midlands, England. For Eurostat purposes Walsall and Wolverhampton is a NUTS 3 region and is one of five boroughs or unitary districts that comprise the "West Midlands" NUTS 2 region...
.

The SX984 was lost in a crash on February 19, 1955 while serving in Kenya
Kenya
Kenya , officially known as the Republic of Kenya, is a country in East Africa that lies on the equator, with the Indian Ocean to its south-east...
during the Mau Mau Uprising
Mau Mau Uprising
The Mau Mau Uprising was a military conflict that took place in Kenya between 1952 and 1960...
.

On returning from an operational bombing sortie at 1540 hours some 1hr 25mins flying time (total airborne time to the moment of the crash was 1hr 33mins), the pilot of SX984 carried out several unauthorized low passes over the police hut at Githunguri, where another 49 squadron crew where paying a visit. On the third such pass SX984 struck the roof of the hut and a telegraph pole breaking off part of the wing and some of its nose. It went into a steep climb, stalled and crashed to the ground 8 miles north north west of Kiambu
Kiambu
Kiambu is a town in Central Province, Kenya. It is located at around , in the elevation of about 1,720 m. It has an urban population of 13,814. It is the capital of the Kiambu District, which bounds the northern border of Nairobi...
killing five members of the crew and four civilians on the ground. A visiting crew member called Pierson managed to pull the Rear Gunner from the wreckage, but he died a few hours later of his injuries.

The finding of the Board of Inquiry was that the accident was caused by willful disobedience of orders and by unauthorized low flying.