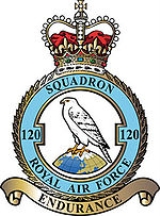 Encyclopedia
No. 120 Squadron of the Royal Air Force
Royal Air Force
The Royal Air Force is the aerial warfare service branch of the British Armed Forces. Formed on 1 April 1918, it is the oldest independent air force in the world...
operated the Nimrod MR2, based at RAF Kinloss
RAF Kinloss
RAF Kinloss is a Royal Air Force station near Kinloss, on the Moray Firth in the north of Scotland. It opened on 1 April 1939 and served as an RAF training establishment during the Second World War. After the war it was handed over to Coastal Command to watch over Russian ships and submarines in...
, Moray
Moray
Moray is one of the 32 council areas of Scotland. It lies in the north-east of the country, with coastline on the Moray Firth, and borders the council areas of Aberdeenshire and Highland.- History :...
, Scotland
Scotland
Scotland is a country that is part of the United Kingdom. Occupying the northern third of the island of Great Britain, it shares a border with England to the south and is bounded by the North Sea to the east, the Atlantic Ocean to the north and west, and the North Channel and Irish Sea to the...
until the type's withdrawal in March 2010.

No. 120 Squadron of the Royal Flying Corps
Royal Flying Corps
The Royal Flying Corps was the over-land air arm of the British military during most of the First World War. During the early part of the war, the RFC's responsibilities were centred on support of the British Army, via artillery co-operation and photographic reconnaissance...
was formed at Cramlington on 1 January 1918, as a day bomber unit and was planned to be equipped with Airco DH.9
Airco DH.9
The Airco DH.9 - also known after 1920 as the de Havilland DH.9 - was a British bomber used in the First World War...
. The First World War
World War I
World War I , which was predominantly called the World War or the Great War from its occurrence until 1939, and the First World War or World War I thereafter, was a major war centred in Europe that began on 28 July 1914 and lasted until 11 November 1918...
ended before it became operational, as the DH.9s were not delivered until October 1918, so 120 Squadron spent late 1918 and 1919 flying communication and mail flights in Western Europe until it was disbanded late in 1919.

Reformed as part of Coastal Command in Northern Ireland
Northern Ireland
Northern Ireland is one of the four countries of the United Kingdom. Situated in the north-east of the island of Ireland, it shares a border with the Republic of Ireland to the south and west...
in 1941 at RAF Nutts Corner
RAF Nutts Corner
RAF Nutts Corner was a Royal Air Force station in County Antrim near Belfast. It was originally a civil airfield, then it became a military airfield and subsequently Northern Ireland's main civil airport until the 1960s.-Civil operations:...
, the unit was equipped with the Consolidated Liberator
B-24 Liberator
The Consolidated B-24 Liberator was an American heavy bomber, designed by Consolidated Aircraft of San Diego, California. It was known within the company as the Model 32, and a small number of early models were sold under the name LB-30, for Land Bomber...
, flying against the U-Boat
U-boat
U-boat is the anglicized version of the German word U-Boot , itself an abbreviation of Unterseeboot , and refers to military submarines operated by Germany, particularly in World War I and World War II...
threat in the war in the North Atlantic
Second Battle of the Atlantic
The Battle of the Atlantic was the longest continuous military campaign in World War II, running from 1939 to the defeat of Germany in 1945. At its core was the Allied naval blockade of Germany, announced the day after the declaration of war, and Germany's subsequent counter-blockade. It was at its...
. The squadron received the first Mark I Liberators in June and began flying nine of them in September from bases in Aldergrove, Northern Ireland and Reykjavik, Iceland. The number of Liberators in September 1942 had increased to six Mark I, two Mark II, and three Mark III. 120 Squadron remained the only Coastal Command squadron flying VLR (Very Long Range) Liberators in February 1943 with five Mark I and twelve Mark III.

The squadron was very successful in this role, sinking 14 U-Boats outright, with shares in three more and eight damaged by the end of the war and its disbandment on 4 June 1945 at RAF Ballykelly. This was the highest kill total in Coastal Command, achieved whilst flying from Northern Ireland, Iceland
Iceland
Iceland , described as the Republic of Iceland, is a Nordic and European island country in the North Atlantic Ocean, on the Mid-Atlantic Ridge. Iceland also refers to the main island of the country, which contains almost all the population and almost all the land area. The country has a population...
, and in support of Operation Overlord
Operation Overlord
Operation Overlord was the code name for the Battle of Normandy, the operation that launched the invasion of German-occupied western Europe during World War II by Allied forces. The operation commenced on 6 June 1944 with the Normandy landings...
- the Allied invasion of France in 1944.

The squadron reformed again on 1 October 1946, by renumbering 160 Squadron
No. 160 Squadron RAF
No. 160 Squadron RAF was a Royal Air Force unit during World War II, when it flew for four years in a number of roles including heavy bomber, minelaying, reconnaissance, special operations and transport unit in the Middle East and South-East Asian theatre of World War II.-World War I: False start:No...
at RAF Leuchars
RAF Leuchars
RAF Leuchars is the most northerly air defence station in the United Kingdom. It is located in Leuchars, Fife, on the east coast of Scotland, near to the university town of St Andrews.-Operations:...
. It was equipped with Lancaster GR.3s
Avro Lancaster
The Avro Lancaster is a British four-engined Second World War heavy bomber made initially by Avro for the Royal Air Force . It first saw active service in 1942, and together with the Handley Page Halifax it was one of the main heavy bombers of the RAF, the RCAF, and squadrons from other...
though some Liberators remained on strength till June 1947. A detachment moved to Palestine
Palestine
Palestine is a conventional name, among others, used to describe the geographic region between the Mediterranean Sea and the Jordan River, and various adjoining lands....
in November 1947 where it carried out searches for illegal immigrant ships until February 1948, when it returned to Britain.


Cold War and beyond

The squadron re-equipped with Shackleton MR.1s
Avro Shackleton
The Avro Shackleton was a British long-range maritime patrol aircraft for use by the Royal Air Force. It was developed by Avro from the Avro Lincoln bomber with a new fuselage...
in April 1951, and continued operating the MR.2 and MR.3 versions in the maritime patrol role until February 1971. It re-equipped with Hawker-Siddeley Nimrods in February 1971, gaining the updated Nimrod MR.2 in 1981. It flew operationally in the Falklands War
Falklands War
The Falklands War , also called the Falklands Conflict or Falklands Crisis, was fought in 1982 between Argentina and the United Kingdom over the disputed Falkland Islands and South Georgia and the South Sandwich Islands...
in 1982 and the Gulf War
Gulf War
The Persian Gulf War , commonly referred to as simply the Gulf War, was a war waged by a U.N.-authorized coalition force from 34 nations led by the United States, against Iraq in response to Iraq's invasion and annexation of Kuwait.The war is also known under other names, such as the First Gulf...
in 1991. The squadron has been based at RAF Kinloss
RAF Kinloss
RAF Kinloss is a Royal Air Force station near Kinloss, on the Moray Firth in the north of Scotland. It opened on 1 April 1939 and served as an RAF training establishment during the Second World War. After the war it was handed over to Coastal Command to watch over Russian ships and submarines in...
since 1 April 1959. On 31 March 2010, the Nimrod MR.2 was withdrawn from service, and the squadron formally disbanded on 26 May 2011.