It was at the Nigrodharama that Mahāpajāpati Gotamī
Mahapajapati Gotami
Mahāpajābatī Gotamī was the first woman to request ordination from the Buddha and to join the Saṅgha...
first asked permission for women to enter the Order
Sangha
Sangha is a word in Pali or Sanskrit that can be translated roughly as "association" or "assembly," "company" or "community" with common goal, vision or purpose...
. This was refused, and from there the Buddha went on to Vesāli
Vaishali (ancient city)
Vaiśālī was the capital city of the Licchavi, one of world's first republics, in the Vajjian Confederacy mahajanapada, around the 6th century BC. It was here in 599 BCE the 24th Jain Tirthankara, Bhagwan Mahavira was born and brought up in Kundalagrama in Vaiśālī republic, which make pious &...
.

The Buddha stayed at the Nigrodhārāma on several occasions, and several Vinaya rules are mentioned as being first promulgated there. Various Sākyans came to see the Buddha at the Nigrodhārāma, among them, Mahānāma
Mahanama
Mahanama may refer to*Mahanama College in Colombo*Roshan Mahanama, Sri Lankan cricketer*Shantha Bandara, alias Mahanama...
, Godha
Godha
The Godha are Hindu caste found in the state of Gujarat in India. They are also known as Gondha and Gonda. The Godha use Dengar as a community surname.-History and origin:...
, Sarakāni, Nandiya and Vappa.

The Buddha himself visited Kāligodhā during his residence there. It was during a discussion with Mahānāma that the Cula Dukkhakkhandha Sutta was preached. During one of the Buddha's residences in Nigrodhārāma, the Sākyans invited him to consecrate their new Mote Hall, which he did by preaching there far into the night and then asking Moggallāna to continue his discourse. On another occasion the Buddha is mentioned as having spent a period of convalescence at Nigrodhārāma; he was there also when the quarrel broke out between the Sākyans
Sakya
The Sakya school is one of four major schools of Tibetan Buddhism, the others being the Nyingma, Kagyu, and Gelug...
and the Koliyans regarding the water of the Rohinī). It seems to have been the Buddha's custom, when staying at Nigrodhārāma, sometimes to spend the noonday siesta in the Mahāvana (Great Forest) nearby. 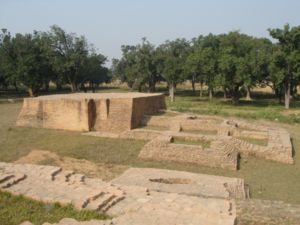 Among others mentioned as having stayed at Nigrodhārāma are Anuruddha
Anuruddha
Anuruddha was one of the five head disciples and a cousin of Gautama Buddha.-Early years:Anuruddha was the son of Sukkhodana and brother to Mahanama. Since Sukkhodana was the brother of Suddhodana, king of the Sakyas in Kapilavastu, Anuruddha was cousin to Siddhartha, . He was a kshatriya by...
and Lomasakangiya; a deva called Candana there taught him the Bhaddekaratta Sutta. This Lomasakangīya might be the same as Lomavangīsa, who is also mentioned as having lived in Nigrodhārāma?

Near Nigrodhārāma was once the site of the dwelling of a hermit (isi) called Kanha
Kanha
Kanha or Kanhapad was one of the poets of Charjapad, the earliest known example of bangla literature. He was a tantric buddhist and his poems in Charjapad are written in a code, whereby every poem has a descriptive or narrative surface meaning but also encodes tantric buddhist teachings...
. The Buddha, remembering this, once smiled, and, when asked the reason for his smile, related the Kanha Jātaka (J.iv.6).

There is a tradition that the Cariya Pitaka and the Buddhavamsa
Buddhavamsa
The Buddhavamsa is a Buddhist scripture, part of the Pali Canon of Theravada Buddhism. It is included there in the Sutta Pitaka's Khuddaka Nikaya. It is a fairly short work in verse, in 28 chapters, detailing aspects of the life of Gautama Buddha and the twenty-four preceding Buddhas...
were preached by the Buddha to Sariputta during his first stay in Nigrodhārāma. It was probably there that Anuruddha's sister built, at his request, an assembly hall of two storeys for the Sangha. Buddhaghosa
Buddhaghosa
Bhadantācariya Buddhaghoṣa（Chinese: 覺音）was a 5th-century Indian Theravadin Buddhist commentator and scholar. His best-known work is the Visuddhimagga, or Path of Purification, a comprehensive summary and analysis of the Theravada understanding of the Buddha's path to liberation...
says that Kāla Khemaka, the Sākyan, built a special vihāra near Nigrodhārāma, on one side of the grounds.


Current remains of the Nigrodharama

The remains of the Nigrodharama are currently called Kudan, because it is located close to Kudan village. The remains consist of two (excavated) large stupas, and a third as yet unexcavated one. The third (unexcavated) stupa has a more recent (possibly Islamic) structure built on top of it.