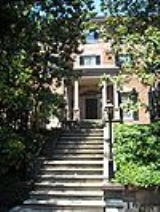 Encyclopedia
Newton D. Baker House, also known as Jacqueline Kennedy House, is a house built in 1794 in Washington, D.C.
Washington, D.C.
Washington, D.C., formally the District of Columbia and commonly referred to as Washington, "the District", or simply D.C., is the capital of the United States. On July 16, 1790, the United States Congress approved the creation of a permanent national capital as permitted by the U.S. Constitution....
. It was home of Newton D. Baker
Newton D. Baker
Newton Diehl Baker, Jr. was an American politician who belonged to the Democratic Party. He served as the 37th mayor of Cleveland, Ohio from 1912 to 1915 and as U.S. Secretary of War from 1916 to 1921.-Early years:...
, who was Secretary of War, during 1916-1920, while "he presided over America's mass mobilization of men and material in World War I.

The house has many architectural details including "a wide limestone stairway", "pink-painted lintels with keystones", "brick voussoirs", "Doric pilasters", and a "semi-elliptical fanlight".
The source of this article is wikipedia, the free encyclopedia.  The text of this article is licensed under the GFDL.