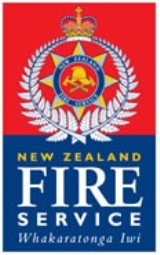 Encyclopedia
The New Zealand Fire Service (Whakaratonga Iwi in Māori
Maori language
Māori or te reo Māori , commonly te reo , is the language of the indigenous population of New Zealand, the Māori. It has the status of an official language in New Zealand...
) is New Zealand
New Zealand
New Zealand is an island country in the south-western Pacific Ocean comprising two main landmasses and numerous smaller islands. The country is situated some east of Australia across the Tasman Sea, and roughly south of the Pacific island nations of New Caledonia, Fiji, and Tonga...
's national fire fighting
Fire fighting
Firefighting is the act of extinguishing fires. A firefighter fights fires to prevent loss of life, and/or destruction of property and the environment...
body. While its founding legislation, the Fire Service Act 1975, only provides for this role, the organisation has assumed (often on the basis of public expectation) responsibility for several other areas.

The NZFS is somewhat unique, internationally, in that it has jurisdiction over the entire country with no division by region or city. It is the result of the New Zealand Fire Service Act (1975) which nationalised the various District-level brigades which had developed across the country.

The New Zealand Fire Service is predominantly configured as an Urban Fire & Rescue Service. The Fire Service Act places responsibility for Firefighting in defined Urban areas on the NZFS, with the remainder of New Zealand mainly covered by the National Rural Fire Authority.

Beneath the Commission are the positions of Chief Executive and National Commander. Currently both positions are filled by Mike Hall, who was formerly the chief of the Queensland Fire Brigades
Queensland Fire and Rescue Service
The Queensland Fire and Rescue Service is the primary provider of fire suppression and life rescue services to the residents and visitors to the state of Queensland, Australia....
. Where the Chief Executive does not have operational fire fighting experience, a separate National Commander is appointed to be the most senior operational fire fighter in the country. The National Commander may take control at a particularly serious incident, though this happens very rarely.

The Chief Executive has a number of direct reports, though these are concerned with matters such as human resources
Human resources
Human resources is a term used to describe the individuals who make up the workforce of an organization, although it is also applied in labor economics to, for example, business sectors or even whole nations...
and finance
Finance
"Finance" is often defined simply as the management of money or “funds” management Modern finance, however, is a family of business activity that includes the origination, marketing, and management of cash and money surrogates through a variety of capital accounts, instruments, and markets created...
rather than operational matters.

The country is broken into eight fire regions, each in the charge of a Fire Region Commander. All FRC's report directly to the National Commander, and are promoted from the ranks of operational staff. An FRC may take control of a major incident, and is ultimately responsible for any incident at which they are present even if they are not the Officer-in-Charge.

Reporting to the Fire Region Commander and his Assistant, are the Chief Fire Officers of each fire district. These are the officers who are ultimately entrusted - via the Fire Service Act - with the powers that are exercised at the scene of an incident in order to 'deal with' the emergency. These powers are far-reaching - they provide authority to commandeer, demolish or destroy whatever is required in the course of their duties, given no more suitable options.

An SSO may run in place of an SO as required or at their own discretion. In career districts the SSOs are strategically located to provide a more experienced command officer who is usually placed such that they are responded to most incidents of significance.

The NZFS was originally designed and equipped as a Firefighting Service, as made obvious by their name. However the additional role - that of a rescue agency - is now of greater significance (in fact the success of the Fire Safety message being put across is that the incidence of 'other' responses (Rescue, etc.) is now greater than that of fire).

Over and above firefighting, the New Zealand Fire Service provides first-response to essentially all emergency situations that are not otherwise handled by the New Zealand Police
New Zealand Police
The New Zealand Police is the national police force of New Zealand, responsible for enforcing criminal law, enhancing public safety, maintaining order and keeping the peace throughout New Zealand...
or a local Ambulance
Ambulance
An ambulance is a vehicle for transportation of sick or injured people to, from or between places of treatment for an illness or injury, and in some instances will also provide out of hospital medical care to the patient...
service. This has mainly come through necessity, but also because Firefighting equipment is often useful for the work involved.

These additional areas have led the NZFS to begin the process of rebranding; it is now actively promoted as being the New Zealand Fire and Rescue Service as this is seen as a more accurate representation of their role in the community. At a government level the much-expanded role of the New Zealand Fire Service has been recognised, and as such the Fire Service Act 1975 (the legislation under which the service operates) is currently under review, with a view to replacing the Act with newer legislation which better supports their work.

The equipment operated by the New Zealand Fire Service is typical of that run by most Fire Brigades world wide. In both Volunteer and Career districts a typical appliance will be equipped to respond primarily to Fires, having a supply of hoses, a Pump (either driven off the Appliance Motor or separately, depending on the pump configuration; most of NZ's mainstream appliances still use a single motor for both drive and pumping capability controlled via a special gearbox) and a combination of High and Low Pressure Deliveries.

Additional equipment carried may include:

In New Zealand most designated Rescue Tenders are also Pumping Appliances, known as Pump-Rescue Tenders (PRTs) and may be responded for either requirement.

The NZFS works closely with the NZ Police in many respects - a key one of those is that the three Communications Centres which coordinate the Fire Service response across NZ are colocated with their Police Equivalents in Auckland
Auckland
The Auckland metropolitan area , in the North Island of New Zealand, is the largest and most populous urban area in the country with residents, percent of the country's population. Auckland also has the largest Polynesian population of any city in the world...
, Wellington
Wellington
Wellington is the capital city and third most populous urban area of New Zealand, although it is likely to have surpassed Christchurch due to the exodus following the Canterbury Earthquake. It is at the southwestern tip of the North Island, between Cook Strait and the Rimutaka Range...
and Christchurch
Christchurch
Christchurch is the largest city in the South Island of New Zealand, and the country's second-largest urban area after Auckland. It lies one third of the way down the South Island's east coast, just north of Banks Peninsula which itself, since 2006, lies within the formal limits of...
. The radio network utilised by the Fire Service for its nationwide coverage is provided and supported by the Police, although most urban areas provide for an exclusive Fire-only radio channel or channels.

In rural areas, the channel may be shared between both services. Generally this is an acceptable arrangement, though when either the Police or the Fire Service are particularly busy in an area with shared radio services, this can cause the other service some grief. In contrast, the fact that Police have ready and direct access to the Fire Communications Centre is occasionally of some value in terms of inter-agency liaison.

At the scene of an incident, VHF or UHF simplex frequencies are generally used. These are usually common between NZFS, NRFA, DoC and NZDF firefighters and discrete from the Police. Access to shared liaison channels is also provided, allowing for Ambulance, Police, Fire and other resources (for example aircraft that may be called upon to assist in firefighting) to coordinate.

Training for career firefighters is done on an intensive 12 week residential course at the national training center in Rotorua that covers not only traditional firefighting subjects but others required of a modern professional Fire and Rescue Service. Topics such as; urban search and rescue (USAR), motor vehicle extrication and hazardous materials.

Competition is high for career positions in New Zealand Fire Service with large numbers of applicants, often in the thousands, going through a rigorous selection process for the 25 spots on a recruit course.

Career firefighters are responsible for attending 70% of all the incidents the New Zealand Fire Service is called to.

The majority of the manpower available to the New Zealand Fire Service is the approximately 8,000 volunteers who receive no payment for their time or labour. Professional career firefighters are available in the cities and large provincial towns only, and in some cases are supplanted by volunteers from other urban and urban-fringe Fire Brigades.

Volunteers come from all walks of life and are trained for their role with a seven day residential recruit course, normally at the National Training Centre (NTC) based in Rotorua, or the Woolston Training Centre, based in Christchurch, that covers the basics of modern firefighting. Training includes, hose drills, ladder drills, portable pumps, and breathing apparatus use (BA), which is carried out in BATB (Breathing Apparatus Training Building) and RFTB (Realistic Fire Training Building) simulators.

The BATB is a gas fired training facility and the RFTB is a live fire scenario.

Volunteer firefighters respond to 30% of all incidents the New Zealand Fire Service attends.

Volunteer units within the NZFS organisation also provide support services over and above the role of the Firefighter; various Fire Police
Fire Police
Fire Police are Volunteer Fire Brigade/Company members who have sworn police powers. They receive special police training and are responsible for traffic control, crowd control, fire and incident scene security, apparatus security, and station security during calls for service.They also assist...
and Operational Support Units manned by volunteers are attached to Fire Districts and Brigades across NZ to provide assistance to firefighters (both paid and volunteer).

The New Zealand Fire Service has a minimum age of Sixteen (16) ( Volunteer ) and Career Firefighters ( Paid ) of Twenty (18) . However it is generally thought that young people have more time supervised in non operational roles such as equipment maintenance before moving on to basic training .