Encyclopedia
New Trier is a city in Dakota County
Dakota County, Minnesota
Dakota County is the third most populous county in the U.S. state of Minnesota. The county is bordered by the Minnesota and Mississippi Rivers on the north, and the state of Wisconsin on the east. Dakota County comprises the southeast portion of seven-county Minneapolis-St. Paul, the thirteenth...
, Minnesota
Minnesota
Minnesota is a U.S. state located in the Midwestern United States. The twelfth largest state of the U.S., it is the twenty-first most populous, with 5.3 million residents. Minnesota was carved out of the eastern half of the Minnesota Territory and admitted to the Union as the thirty-second state...
, United States
United States
The United States of America is a federal constitutional republic comprising fifty states and a federal district...
. The population was 112 at the 2010 census. Minnesota Highway 50
Minnesota State Highway 50
Minnesota State Highway 50 is a highway in Minnesota, which runs from its intersection with State Highway 3 and Dakota County Road 74 in Farmington and continues east to its eastern terminus at its intersection with U.S...
serves as a main route in the community.

The community was settled circa
Circa
Circa , usually abbreviated c. or ca. , means "approximately" in the English language, usually referring to a date...
1856, and is named after the city of Trier, Germany
Trier
Trier, historically called in English Treves is a city in Germany on the banks of the Moselle. It is the oldest city in Germany, founded in or before 16 BC....
. 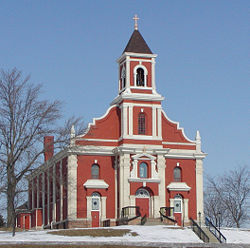 As of the census
Census
A census is the procedure of systematically acquiring and recording information about the members of a given population. It is a regularly occurring and official count of a particular population. The term is used mostly in connection with national population and housing censuses; other common...
of 2000, there were 116 people, 31 households, and 27 families residing in the city. The population density
Population density
Population density is a measurement of population per unit area or unit volume. It is frequently applied to living organisms, and particularly to humans...
was 592.0 people per square mile (223.9/km²). There were 31 housing units at an average density of 158.2 per square mile (59.8/km²). The racial makeup of the city was 94.83% White, 1.72% Native American, and 3.45% from two or more races. Hispanic or Latino of any race were 3.45% of the population.

There were 31 households out of which 54.8% had children under the age of 18 living with them, 77.4% were married couples
Marriage
Marriage is a social union or legal contract between people that creates kinship. It is an institution in which interpersonal relationships, usually intimate and sexual, are acknowledged in a variety of ways, depending on the culture or subculture in which it is found...
living together, 6.5% had a female householder with no husband present, and 12.9% were non-families. 3.2% of all households were made up of individuals and none had someone living alone who was 65 years of age or older. The average household size was 3.68 and the average family size was 3.89.

The median income for a household in the city was $59,583, and the median income for a family was $71,875. Males had a median income of $31,875 versus $30,179 for females. The per capita income
Per capita income
Per capita income or income per person is a measure of mean income within an economic aggregate, such as a country or city. It is calculated by taking a measure of all sources of income in the aggregate and dividing it by the total population...
for the city was $18,427. There were no families and 2.5% of the population living below the poverty line, including no under eighteens and none of those over 64.