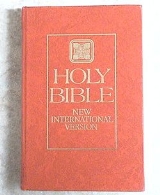 Encyclopedia
The New International Version (NIV) is an English
English language
English is a West Germanic language that arose in the Anglo-Saxon kingdoms of England and spread into what was to become south-east Scotland under the influence of the Anglian medieval kingdom of Northumbria...
translation
Translation
Translation is the communication of the meaning of a source-language text by means of an equivalent target-language text. Whereas interpreting undoubtedly antedates writing, translation began only after the appearance of written literature; there exist partial translations of the Sumerian Epic of...
of the Christian
Christianity
Christianity is a monotheistic religion based on the life and teachings of Jesus as presented in canonical gospels and other New Testament writings...
Bible
Bible
The Bible refers to any one of the collections of the primary religious texts of Judaism and Christianity. There is no common version of the Bible, as the individual books , their contents and their order vary among denominations...
. Published by Zondervan
Zondervan
Zondervan is an international Christian media and publishing company located in Grand Rapids, Michigan. Zondervan is a founding member of the Evangelical Christian Publishers Association .- History :...
in the United States and by Hodder & Stoughton
Hodder & Stoughton
Hodder & Stoughton is a British publishing house, now an imprint of Hachette.-History:The firm has its origins in the 1840s, with Matthew Hodder's employment, aged fourteen, with Messrs Jackson and Walford, the official publisher for the Congregational Union...
in the UK, it has become one of the most popular modern translations in history.

The New International Version project was started after a meeting in 1965 at Trinity Christian College
Trinity Christian College
Trinity Christian College is a liberal arts college located in Palos Heights, Illinois, a southwest suburb of Chicago. The college was founded in 1959 by a group of Chicago businessmen who wanted to establish a college providing students with a Christian higher education in a Reformed tradition...
in Palos Heights, Illinois
Palos Heights, Illinois
Palos Heights is a city in Cook County, Illinois, United States. The population was 11,260 at the 2000 census, and estimated to be 12,561 in 2005.-Geography:Palos Heights is located at ....
, between the Christian Reformed Church
Christian Reformed Church in North America
The Christian Reformed Church in North America is a Protestant Christian denomination in the United States and Canada. Having roots in the Dutch Reformed churches of the Netherlands, the Christian Reformed Church was founded by Gijsbert Haan and Dutch immigrants who left the Reformed Church in...
, National Association of Evangelicals
National Association of Evangelicals
The National Association of Evangelicals is a fellowship of member denominations, churches, organizations, and individuals. Its goal is to honor God by connecting and representing evangelicals in the United States. Today it works in four main areas: Church & Faith Partners, Government Relations,...
, and a group of international scholars. The New York Bible Society (now Biblica) was selected to do the translation. The New Testament was released in 1973 and the full Bible in 1978. There are a couple of very rare 1973 editions which are signed by a few of the translating committee members which were released before the other 1973 and 1978 editions. It underwent a minor revision in 1984. A planned 1997 edition was discontinued over inclusive language.A revised edition titled Today's New International Version
Today's New International Version
Today's New International Version is an English translation of the Bible developed by the Committee on Bible Translation. The CBT also developed the New International Version in the 1970s. The TNIV is based on the NIV. It is explicitly Protestant like its predecessor; the deuterocanonical books...
released a New Testament in March 2002 with the complete Bible was published February 2005.

Keith Danby, president and chief executive officer of Biblica, once known as the International Bible Society, said they erred in presenting past updates, failed to convince people revisions were needed and "underestimated" readers' loyalty to the 1984 NIV. In 2011 an updated version was released. This update incorporates a majority of the gender language of the TNIV and most of its other changes. Some translational issues with Paul's letters were also addressed.

The manuscript base for the Old Testament was the Biblia Hebraica Stuttgartensia
Biblia Hebraica Stuttgartensia
The Biblia Hebraica Stuttgartensia, or ', is an edition of the Masoretic Text of the Hebrew Bible as preserved in the Leningrad Codex, and supplemented by masoretic and text-critical notes...
Masoretic Hebrew Text
Masoretic Text
The Masoretic Text is the authoritative Hebrew text of the Jewish Bible and is regarded as Judaism's official version of the Tanakh. While the Masoretic Text defines the books of the Jewish canon, it also defines the precise letter-text of these biblical books, with their vocalization and...
. Other ancient texts consulted were the Dead Sea Scrolls
Dead Sea scrolls
The Dead Sea Scrolls are a collection of 972 texts from the Hebrew Bible and extra-biblical documents found between 1947 and 1956 on the northwest shore of the Dead Sea, from which they derive their name...
, the Samaritan Pentateuch
Samaritan Pentateuch
The Samaritan Pentateuch, sometimes called Samaritan Torah, , is a version of the Hebrew language Pentateuch, the first five books of the Bible, used by the Samaritans....
, the Aquila
Aquila of Sinope
Aquila of Sinope was a 2nd Century CE native of Pontus in Anatolia known for producing an exceedingly literal translation of the Hebrew Bible into Greek around 130 CE. He was a proselyte to Judaism and a disciple of Rabbi Akiba...
, Symmachus
Symmachus the Ebionite
Symmachus was the author of one of the Greek versions of the Old Testament. It was included by Origen in his Hexapla and Tetrapla, which compared various versions of the Old Testament side by side with the Septuagint...
and Theodotion
Theodotion
Theodotion was a Hellenistic Jewish scholar,, perhaps working in Ephesus who in ca. AD 150 translated the Hebrew Bible into Greek. Whether he was revising the Septuagint, or was working from Hebrew manuscripts that represented a parallel tradition that has not survived, is debated...
, the Latin Vulgate, the Syriac Peshitta, the Aramaic Targum
Targum
Taekwondo is a Korean martial art and the national sport of South Korea. In Korean, tae means "to strike or break with foot"; kwon means "to strike or break with fist"; and do means "way", "method", or "path"...
, and for the Psalms the Juxta Hebraica
Latin Psalters
The Latin Psalters are the translations of the Book of Psalms into the Latin language. They are the premier liturgical resource used in the Liturgy of the Hours of the Latin Rites of the Roman Catholic Church...
of Jerome. The manuscript base of the NIV was the Koine Greek
Koine Greek
Koine Greek is the universal dialect of the Greek language spoken throughout post-Classical antiquity , developing from the Attic dialect, with admixture of elements especially from Ionic....
language editions of the United Bible Societies
United Bible Societies
The United Bible Societies is a worldwide association of Bible societies. In 1946 delegates from 13 countries formed the UBS, as an effort to coordinate the activities of the bible societies. The first headquarters were London and in Geneva...
and of Nestle-Aland for the New Testament
New Testament
The New Testament is the second major division of the Christian biblical canon, the first such division being the much longer Old Testament....
. The deuterocanonical books
Deuterocanonical books
Deuterocanonical books is a term used since the sixteenth century in the Catholic Church and Eastern Christianity to describe certain books and passages of the Christian Old Testament that are not part of the Hebrew Bible. The term is used in contrast to the protocanonical books, which are...
are not included in the translation.

The core translation group consisted of fifteen Biblical scholars. The translation took ten years and involved a team of up to 100 scholars from the USA, Canada, the United Kingdom, Australia, New Zealand, and South Africa. The range of those participating included many different denominations such as Anglicans, Assemblies of God, Baptist, Christian Reformed, Lutheran and Presbyterian.

According to the Christian Business Association, the New International Version has become the most popular selling English translation of the Bible, having sold more than 215 million copies worldwide.

Bruce M. Metzger criticizes the addition of just into so the verse becomes "For when I brought your forefathers out of Egypt and spoke to them, I did not just give them commands about burnt offerings and sacrifices." Metzger also criticizes the addition of your into , so it becomes "Though it [the mustard seed
Parable of the Mustard Seed
The Parable of the Mustard Seed is one of the shorter parables of Jesus. It appears in three of the Canonical gospels of the New Testament. The differences between Gospels of Matthew , Mark , and Luke , are minor...
] is the smallest of all your seeds", avoiding any impression of Jesus's speaking a botanical untruth. The your has been removed in the 2011 NIV revision.

N. T. Wright has written: "When the New International Version was published in 1980, I was one of those who hailed it with delight. I believed its own claim about itself, that it was determined to translate exactly what was there, and inject no extra paraphrasing or interpretative glosses…. Disillusionment set in over the next two years, as I lectured verse by verse through several of Paul's letters, not least Galatians
Epistle to the Galatians
The Epistle of Paul to the Galatians, often shortened to Galatians, is the ninth book of the New Testament. It is a letter from Paul of Tarsus to a number of Early Christian communities in the Roman province of Galatia in central Anatolia...
and Romans
Epistle to the Romans
The Epistle of Paul to the Romans, often shortened to Romans, is the sixth book in the New Testament. Biblical scholars agree that it was composed by the Apostle Paul to explain that Salvation is offered through the Gospel of Jesus Christ...
. Again and again, with the Greek text in front of me and the NIV beside it, I discovered that the translators had another principle, considerably higher than the stated one: to make sure that Paul should say what the broadly Protestant and evangelical tradition said he said. …[I]f a church only, or mainly, relies on the NIV it will, quite simply, never understand what Paul was talking about."

Professor of New Testament Studies Daniel B. Wallace
Daniel B. Wallace
Daniel Baird Wallace is a professor of New Testament Studies at Dallas Theological Seminary where he has been tenured since 1995. He is also the founder of the Center of the Study of NT Manuscripts....
has stated, "...it is a well-thought out translation, with checks and balances through rigorous testing, overlapping committees to ensure consistency and accuracy..."