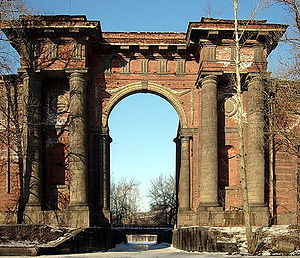 New Holland Island in Saint Petersburg
Saint Petersburg
Saint Petersburg is a city and a federal subject of Russia located on the Neva River at the head of the Gulf of Finland on the Baltic Sea...
was created in 1720, when the newly built Kryukov Canal and Admiralty Canal connected the Moika River
Moika River
The Moyka River is a small river which encircles the central portion of Saint Petersburg, effectively making it an island. The river, originally known as Mya, derives its name from the Ingrian word for "slush, mire"...
with the Neva. The triangular island took its name after a number of canals and shipbuilding facilities that rendered its appearance similar to Amsterdam
Amsterdam
Amsterdam is the largest city and the capital of the Netherlands. The current position of Amsterdam as capital city of the Kingdom of the Netherlands is governed by the constitution of August 24, 1815 and its successors. Amsterdam has a population of 783,364 within city limits, an urban population...
.

During the following centuries, the island belonged to the Russian Admiralty
Russian Admiralty
Admiralty Board was a supreme body for the administration of the Imperial Russian Navy in the Russian Empire, established by Peter the Great on December 12, 1718, and headquartered in the Admiralty building, Saint Petersburg....
, which would adapt the plot for its various needs. Originally, there was a minor shipyard
Shipyard
Shipyards and dockyards are places which repair and build ships. These can be yachts, military vessels, cruise liners or other cargo or passenger ships. Dockyards are sometimes more associated with maintenance and basing activities than shipyards, which are sometimes associated more with initial...
for rowing boats. In 1732, the Admiralty engaged architect Ivan Korobov to construct a network of basins and wooden warehouses along the island's perimeter in order to store lumber for shipbuilding.

In 1765, Savva Chevakinsky
Savva Chevakinsky
Savva Ivanovich Chevakinsky was a Russian architect of the Baroque school. He worked in St. Petersburg and Tsarskoe Selo.Chevakinsky was born into a noble family in the village of Veshki in the Novotorzhsk district of Tver province....
was ordered to rebuild the warehouses in brick but without customary stucco
Stucco
Stucco or render is a material made of an aggregate, a binder, and water. Stucco is applied wet and hardens to a very dense solid. It is used as decorative coating for walls and ceilings and as a sculptural and artistic material in architecture...
decoration. By 1788, when the project was halted, Jean-Baptiste Vallin de la Mothe
Jean-Baptiste Vallin de la Mothe
thumb|St. Petersburg's [[Imperial Academy of Arts]]Jean-Baptiste Michel Vallin de la Mothe was a French architect whose major career was spent in St...
had designed and supervised the construction of a highly pitched Neoclassical
Neoclassical architecture
Neoclassical architecture was an architectural style produced by the neoclassical movement that began in the mid-18th century, manifested both in its details as a reaction against the Rococo style of naturalistic ornament, and in its architectural formulas as an outgrowth of some classicizing...
arch
Arch
An arch is a structure that spans a space and supports a load. Arches appeared as early as the 2nd millennium BC in Mesopotamian brick architecture and their systematic use started with the Ancient Romans who were the first to apply the technique to a wide range of structures.-Technical aspects:The...
over the canal. This magnificent red-brick gateway to the island, known as the New Holland Arch, is flanked by massive Tuscan columns of red granite.

New Holland did not achieve its present appearance until the building of a naval prison
Prison
A prison is a place in which people are physically confined and, usually, deprived of a range of personal freedoms. Imprisonment or incarceration is a legal penalty that may be imposed by the state for the commission of a crime...
in 1828-29 and a basin for naval architects in 1893. Aleksei Krylov used this basin for testing new models of ships between 1900 and 1908. The most powerful radio station
Radio station
Radio broadcasting is a one-way wireless transmission over radio waves intended to reach a wide audience. Stations can be linked in radio networks to broadcast a common radio format, either in broadcast syndication or simulcast or both...
in Imperial Russia was launched there by the General Staff of the Navy in 1915.

After the Russian Revolution
Russian Revolution of 1917
The Russian Revolution is the collective term for a series of revolutions in Russia in 1917, which destroyed the Tsarist autocracy and led to the creation of the Soviet Union. The Tsar was deposed and replaced by a provisional government in the first revolution of February 1917...
, the 18th-century buildings of New Holland Island fell into neglect, serving time as military barracks, warehouses and (most recently) offices for various commercial enterprises. In 2004, the Ministry of Defense evacuated the buildings, which were to be refurbished for hotels and clubs to a design by Norman Foster, Baron Foster of Thames Bank
Norman Foster, Baron Foster of Thames Bank
Norman Robert Foster, Baron Foster of Thames Bank, OM is a British architect whose company maintains an international design practice, Foster + Partners....
, until the consortium running the project ran into difficulties. A new project is now underway, under the control of Roman Abramovich
Roman Abramovich
Roman Arkadyevich Abramovich is a Russian businessman and the main owner of the private investment company Millhouse LLC.In 2003, Abramovich was named Person of the Year by Expert, a Russian business magazine. He shared this title with Mikhail Khodorkovsky...
.