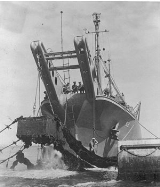 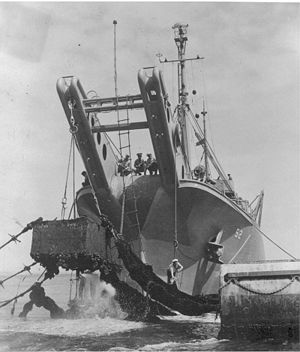 A net laying ship, also known as a net layer, net tender or boom defence vessel was a type of small auxiliary ship.

A net layer's primary function was to lay and maintain steel anti-torpedo or anti-submarine net
Anti-submarine net
An anti-submarine net is a device placed across the mouth of a harbour or a strait for protection against submarines.-Examples of anti-submarine nets:*Lake Macquarie anti-submarine boom*Indicator net*Naval operations in the Dardanelles Campaign...
s. Nets could be laid around an individual ship at anchor, or around harbor
Harbor
A harbor or harbour , or haven, is a place where ships, boats, and barges can seek shelter from stormy weather, or else are stored for future use. Harbors can be natural or artificial...
s or other anchor
Anchor
An anchor is a device, normally made of metal, that is used to connect a vessel to the bed of a body of water to prevent the vessel from drifting due to wind or current. The word derives from Latin ancora, which itself comes from the Greek ἄγκυρα .Anchors can either be temporary or permanent...
ages. Net laying was potentially dangerous work, and net laying seamen were experts at dealing with blocks, tackles, knots and splicing. As World War II
World War II
World War II, or the Second World War , was a global conflict lasting from 1939 to 1945, involving most of the world's nations—including all of the great powers—eventually forming two opposing military alliances: the Allies and the Axis...
progressed, net layers were pressed into a variety of additional roles including salvage
Marine salvage
Marine salvage is the process of rescuing a ship, its cargo, or other property from peril. Salvage encompasses rescue towing, refloating a sunken or grounded vessel, or patching or repairing a ship...
, troop and cargo transport, buoy
Buoy
A buoy is a floating device that can have many different purposes. It can be anchored or allowed to drift. The word, of Old French or Middle Dutch origin, is now most commonly in UK English, although some orthoepists have traditionally prescribed the pronunciation...
maintenance, and service as tugboat
Tugboat
A tugboat is a boat that maneuvers vessels by pushing or towing them. Tugs move vessels that either should not move themselves, such as ships in a crowded harbor or a narrow canal,or those that cannot move by themselves, such as barges, disabled ships, or oil platforms. Tugboats are powerful for...
s.

Net layers initially received the hull classification symbol YN (for "Yard Net Tender") but were later reclassified AN (for "Auxiliary Net Layer"). The British Admiralty
Admiralty
The Admiralty was formerly the authority in the Kingdom of England, and later in the United Kingdom, responsible for the command of the Royal Navy...
knew such ships as a “boom defence vessel".

The first 32, all launched in 1940 (before the attack on Pearl Harbor
Pearl Harbor
Pearl Harbor, known to Hawaiians as Puuloa, is a lagoon harbor on the island of Oahu, Hawaii, west of Honolulu. Much of the harbor and surrounding lands is a United States Navy deep-water naval base. It is also the headquarters of the U.S. Pacific Fleet...
), were built of steel. Due to the chronic shortage of steel during the war, the next 30 were built of wood. The last 15, laid down in 1944 and 1945, were again constructed of steel.

A total of 77 net layers of all classes served with the US Navy during the war. The vessels served in all theatres of war but particularly in the Pacific. Many of the ships were decommissioned after the war, but some continued in service for several more decades. Net layers were eventually made redundant by advances in underwater detection technology.