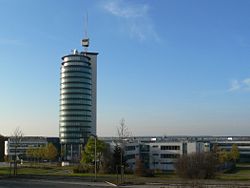 Neckarsulm TDS Office Tower is a 20 floor tall office building in Neckarsulm
Neckarsulm
Neckarsulm is a city in northern Baden-Württemberg, Germany, near Stuttgart, and part of the district Heilbronn. As of 2004, Neckarsulm had 27,296 inhabitants....
, Stuttgart
Stuttgart
Stuttgart is the capital of the state of Baden-Württemberg in southern Germany. The sixth-largest city in Germany, Stuttgart has a population of 600,038 while the metropolitan area has a population of 5.3 million ....
, Germany
Germany
Germany , officially the Federal Republic of Germany , is a federal parliamentary republic in Europe. The country consists of 16 states while the capital and largest city is Berlin. Germany covers an area of 357,021 km2 and has a largely temperate seasonal climate...
. Neckarsulm TDS Office Tower houses the offices of TDS AG, dsb AG and the LIDL training center.

TDS Office Tower was constructed during the period 1997 to 1999. Including the roof-mounted antenna it is 103 metres tall and the tallest office building in the Heilbronn
Heilbronn
Heilbronn is a city in northern Baden-Württemberg, Germany. It is completely surrounded by Heilbronn County and with approximately 123.000 residents, it is the sixth-largest city in the state....
area.