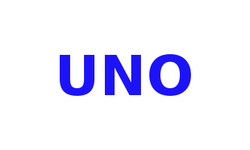 National Opposition Union (Unión Nacional Opositora--UNO) was a wide-range cartel of opposition parties formed to contest Nicaragua's president Daniel Ortega
Daniel Ortega
José Daniel Ortega Saavedra is a Nicaraguan politician and revolutionary, currently serving as the 83rd President of Nicaragua, a position that he has held since 2007. He previously served as the 79th President, between 1985 and 1990, and for much of his life, has been a leader in the Sandinista...
in 1990 election. Its candidate Violeta Chamorro
Violeta Chamorro
Violeta Barrios Torres de Chamorro is a Nicaraguan political leader, former president and publisher. She became president of Nicaragua on April 25, 1990, when she unseated Daniel Ortega...
eventually won the race. UNO traced its origins back to the Nicaraguan Democratic Coordinating Group (Coordinadora Democrática Nicaragüense
Coordinadora Democrática Nicaragüense
The Coordinadora Democrática Nicaragüense was a coalition of three right-wing Nicaraguan parties which boycotted the Nicaraguan general election, 1984. The parties were the Social Christians, the Social Democrats, and the Constitutional Liberal Party....
--CDN), which was formed in 1982 by different opposition groups. At the time of the election, of the UNO coalition's fourteen political parties, four were considered conservative
Conservatism
Conservatism is a political and social philosophy that promotes the maintenance of traditional institutions and supports, at the most, minimal and gradual change in society. Some conservatives seek to preserve things as they are, emphasizing stability and continuity, while others oppose modernism...
, seven could be characterised as centrist parties, and three - including Nicaragua's Communists
Nicaraguan Socialist Party
The Nicaraguan Socialist Party is a political party in Nicaragua. Founded in July 1944 by Dr. Mario Flores Ortiz. PSN operated as the official communist party in the country. At the time of its foundation, PSN supported the regime of Anastasio Somoza García. PSN considered that Somoza was an...
- had traditionally been on the far left of the political spectrum (see http://www.country-data.com/frd/cs/nicaragua/ni_appen.html#table10).

Despite internal struggle, the UNO coalition under Violeta Chamorro succeeded in its campaign centered around the economic downfall and promises of peace. Chamorro promised to end military draft, initiate democratic reconciliation, and restore economic growth. Many Nicaraguans felt that the contra war and bad economy would continue if the FSLN remained in power, because of the strong United States opposition to the FSLN (the Bush Administration had declared that it would only send aid to the government if the UNO was elected). Meanwhile, resources and organisational help were given to the UNO by the United States government's National Endowment for Democracy (NED), which in June 1989 had receive $2 million from U.S. Congress, which had also approved in April 1989 a package of $49.75 million in 'nonlethal' aid to the Contras, which funded their pro-UNO propaganda campaign. Some villages reported threats of murder from the Contras if they voted for the FSLN in the elections.

The UNO disbanded in mid-1990s, after a very fractious rule during which little progress was made. The most positive consequence of their electoral victory was the end of the Contra War and the U.S. economic embargo.

The APC, PANC, and PCN announced in 1992 that they would merge as the National Conservative Party (Partido Conservador Nationalista--PCN) for the 1996 elections.