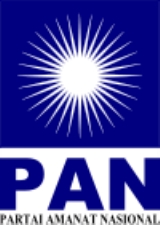 Encyclopedia
The National Mandate Party is a moderate Islamist political party
Political party
A political party is a political organization that typically seeks to influence government policy, usually by nominating their own candidates and trying to seat them in political office. Parties participate in electoral campaigns, educational outreach or protest actions...
in Indonesia
Indonesia
Indonesia , officially the Republic of Indonesia , is a country in Southeast Asia and Oceania. Indonesia is an archipelago comprising approximately 13,000 islands. It has 33 provinces with over 238 million people, and is the world's fourth most populous country. Indonesia is a republic, with an...
. It was founded by reformists, including Amien Rais
Amien Rais
Amien Rais is a prominent Indonesian politician who led and inspired the reform movement that forced the resignation of President Suharto in 1998. Amien Rais was the leader of Muhammadiyah, one of the two biggest Muslim organizations in Indonesia, from 1995 to 2000...
, chairman of the Muhammadiyah
Muhammadiyah
Muhammadiyah is an Islamic organization in Indonesia. Muhammadiyah, literally means "followers of Muhammad"...
organization, during the Indonesian reformation
Indonesian Revolution of 1998
Suharto retired as president of Indonesia in May 1998 following the collapse of support for his three-decade long presidency. The resignation followed severe economic and political crises in the previous 6 to 12 months. BJ Habibie continued at least a year of his remaining presidential years,...
. The party contested the 2009 elections
Indonesian legislative election, 2009
Legislative elections were held in Indonesia on 9 April 2009 for 132 seats of the Regional Representative Council and 560 seats of the People's Representative Council . A total of 38 parties met the requirements to be allowed to participate in the national elections, with a further six contesting...
under the chairmanship of Sutrisno Bachir.

On 14 May 1998, around 50 political figures, including Goenawan Mohammad, Faisal Basri and Amien Rais
Amien Rais
Amien Rais is a prominent Indonesian politician who led and inspired the reform movement that forced the resignation of President Suharto in 1998. Amien Rais was the leader of Muhammadiyah, one of the two biggest Muslim organizations in Indonesia, from 1995 to 2000...
established an organization called the Peoples Mandate Council open to anybody who wanted to listen and express opinions. At the time, Amien Rais said that MARA would assess the performance of president Suharto's cabinet
Cabinet of Indonesia
The cabinet of Indonesia is the council of ministers appointed by the president. Indonesia has seen dozens of cabinets since independence in 1945, although during the New Order most cabinets retained unchanged for five years at a time...
over the next six months. He also said that the people needed a strong forum that was respected by those in power and that the power structure under Suharto was not good at listening to people's opinions because it had become arrogant. At the time of the downfall of the Suharto regime
Indonesian Revolution of 1998
Suharto retired as president of Indonesia in May 1998 following the collapse of support for his three-decade long presidency. The resignation followed severe economic and political crises in the previous 6 to 12 months. BJ Habibie continued at least a year of his remaining presidential years,...
in 1998, many new parties were being established and some of them wanted Amien Rais and other members of MARA to join them. One of these was the Crescent Star Party
Crescent Star Party
-History:The party's origins go back to the banning of the Masyumi Party by President Sukarno in 1960. After the ban, supporters and followers of the party established the Crescent Star Family to continue to press for the implementation of Sharia law and Islamic teaching in Indonesia...
whose eventual leader Yusril Ihza Mahendra
Yusril Ihza Mahendra
Yusril Ihza Mahendra is an Indonesian politician. Yusril was formerly the chairman of Crescent Star Party .-Early life:...
tried to persuade Amien Rais to establish a party. When he refused the offer, the party went its own way. On July 27 1998 (the day after the declaration of the creation of the Crescent Star Party), Amien Rais announced the establishment of a new party to be called the People's Mandate Party . This was changed to the current name after a lengthy voting process. The new party had its roots in the principles of religious morality, humanity and prosperity

In the 1999 elections
Indonesian legislative election, 1999
The Indonesian legislative election, 1999, held on June 7, 1999, was the first election since the end of the New Order and the first free election in Indonesia since 1955. With the ending of restrictions on political activity following the fall of Suharto, a total of 48 parties contested the 462...
, PAN won 7.4 percent of the vote and 34 seats in the legislature
People's Representative Council
The People's Representative Council , sometimes referred to as the House of Representatives, is one of two elected national legislative assemblies in Indonesia....
. The party then played a key role in putting together a central axis of Islamic political parties in the People's Consultative Assembly
People's Consultative Assembly
The People's Consultative Assembly is the legislative branch in Indonesia's political system. It is composed of the members of the People's Representative Council and the Regional Representative Council. Before 2004, and the amendments to the 1945 Constitution, the MPR was the highest governing...
which helped ensure that Abdurrahman Wahid
Abdurrahman Wahid
Abdurrahman Wahid, born Abdurrahman Addakhil , colloquially known as , was an Indonesian Muslim religious and political leader who served as the President of Indonesia from 1999 to 2001...
defeated Megawati Sukarnoputri
Megawati Sukarnoputri
In this Indonesian name, the name "Sukarnoputri" is a patronymic, not a family name, and the person should be referred to by the given name "Megawati"....
when that chamber elected the president.

However, PAN's support for Abdurrahman Wahid did not last long. Less than a year after officially confirming its support for him at its first congress in Yogyakarta
Yogyakarta (city)
Yogyakarta is a city in the Yogyakarta Special Region, Indonesia. It is renowned as a centre of classical Javanese fine art and culture such as batik, ballet, drama, music, poetry, and puppet shows. Yogyakarta was the Indonesian capital during the Indonesian National Revolution from 1945 to...
in February 2000, the party withdrew this support, saying it was concerned about the condition of the nation and state of Indonesia. Not long after that, Abdurrahman Wahid was voted out of office and replaced by Megawati Sukarnoputri.

For the 2004 elections
Indonesian legislative election, 2004
Indonesia held legislative elections on 5 April 2004 for both houses of the People's Consultative Assembly, the country's national legislature...
, the party set a target of 15 percent of the vote. In order to promote his presidential candidacy, Amien Rais made a series of visits around the country. He also said that he was convinced that a retired military officer should be his vice-president. However, in the legislative election, the party won 6.4% of the popular vote and 52 out of 550 legislative seats. For the presidential election
Indonesian presidential election, 2004
The first direct presidential election in Indonesia was held in two rounds on 5 July and 20 September 2004. Prior to a 2002 amendment to the Constitution of Indonesia, the President and Vice President was elected by the country's top legislative body, the People's Consultative Assembly.Under the...
, Amien Rais stood with Siswono Yudo Husodo as his running mate, but only won 15% of the vote

In the legislative election held on 9 April 2009, support for the PAN was higher than the party's national average in the following provinces: